In the C716, Josephson Engineering have built upon established technology with some novel ideas of their own. 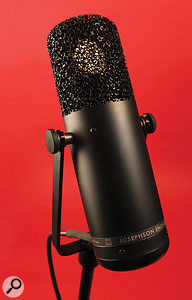 Californian company Josephson Engineering started business over 23 years ago, in 1988. Unlike so many boutique mic companies, Josephson are not afraid of using new technologies to make versatile and high‑performance microphones, rather than resting comfortably on the laurels of the great vintage designs. Many of the company's microphone capsules are also employed in other mic manufacturers' products.

The C716 is the newest addition to the company's 7‑series range of large‑diaphragm condenser mics, and it uses a similar dual‑diaphragm (Braunmühl‑Weber) capsule to that employed as the figure‑of‑eight element in the C700A dual‑capsule mic. This dual‑diaphragm capsule design is derived from the classic Siemens/AKG CK12 capsule, but it has benefited from a few special Josephson improvements and has been well proven since the early 1990s. In the C716 incarnation, though, it is configured as a fixed cardioid pattern, and although only the front diaphragm is electrically 'active', the physical presence and interaction of the rear 'passive' diaphragm provides a more controlled polar response at low frequencies for close sound sources.

All of this translates into improved pop and plosive handling for close sources, and a more modest proximity effect, compared to a typical single‑diaphragm cardioid microphone.

As with all Josephson microphones, the impedance‑converter circuitry is Class‑A, using discrete, solid‑state components. A cascode FET input stage handles the capsule buffering and impedance conversion, and is followed with a pair of matched, bipolar transistors to drive the balanced output directly — there are no transformers here, although a common‑mode choke (a specific kind of dual‑winding inductor) is used to provide RFI immunity. The transformerless electronics in the C716 are capable of generating surprisingly high output levels, and I suspect most preamps will probably require an input pad if the mic is placed close to loud sound sources! The internal circuitry used to power the amplifier and bias the capsule is driven from phantom power in the usual way, but is optically isolated from the audio path to ensure low noise and high stability.

The handbook's specifications for the C716 are fairly comprehensive and detailed. The phantom‑power current requirement is around 5mA (a fairly average load) from a standard 48V (±4V) supply. The minimum preamp input impedance is specified as 1000Ω (with an 80Ω output impedance), and the sensitivity is a fairly healthy 26mV/Pa. The maximum SPL figure is 134dB (no distortion reference is given, but I suspect it is for a 1 percent THD value). The frequency response is quoted as 20Hz to 20kHz, but again without any amplitude limits (although I suspect ±2dB is a reasonable guess, given the specs for other Josephson mics). Self‑noise is 15dB SPL, A‑weighted, meaning this is not the quietest mic ever (the current state of the art for large-diaphragm solid‑state mics is around 6dBA), but not noisy by any means.

Like all directional microphones, the C716 exhibits the proximity effect or bass tip‑up, and in this case it seems to give the most balanced and neutral response for sources at around two foot, six inches (75cm). Working closer than that produces a fairly gentle bass 'bloom' which is proportional to the actual distance, and greater distances from the source will naturally result in a tendency towards becoming bass-light. The microphone's cardioid pattern is pretty well controlled and fairly broad, the output falling by about 6dB close to 90 degrees off‑axis, but the usual narrowing of the pattern at HF, and broadening at LF, are also evident, though off‑axis coloration is generally fairly benign.

The physical design of the C716 is best described as 'chunky'. This is a big microphone, weighing in at around 990g with a body measuring 205mm in length by 63mm in diameter (261mm long if you include the mounting yoke and stand adaptor). The fixed 12‑foot (3.5m) Mogami output cable emanates from the side of the mic body at the bottom, and is terminated in a genuine Neutrik three‑pin male XLR. The cable exit is strain‑protected and usefully identifies the rear of the cardioid pickup pattern, though I would always prefer not to have a fixed cable. An integral U‑shaped stand‑mount yoke attaches via a pair of knurled thumbscrews on either side of the mic case about halfway up. This can be removed completely, however, if you wish to use an alternative shockmount. I'd recommend the Rycote USM, but the current versions won't hold such a large microphone — although I know experimental prototypes exist! Usefully, a 5/8-to-3/8‑inch thread adaptor is included.

Like all of Josephson's black mic models, the C716 has a black-chrome finish, plated over a layer of nickel, and at first glance the top 75mm appears to comprise a coarse, open-cell windsock. However, it turns out that this is actually a special patent‑pending metal‑foam grille. The same design can be seen on the C715 microphone, and it is both highly distinctive and very clever. The idea of this unusual grille design is to minimise internal reflections within the capsule's basket space (reflections that are known to cause coloration and resonances). Indeed, the characteristic sound of many classic mic designs is partly a result of internal reflections from their traditional multi‑layer mesh‑weave baskets and supporting frames! This novel Josephson metal‑foam grille is made from a very tough aluminium alloy, and is entirely self‑supporting, so there are no internal frames to reflect sound. It provides complete protection for the capsule, yet imposes greatly reduced acoustic impedance and reflectivity, and hence greatly reduced coloration. However, being made of metal, it still provides the necessary electrical shielding, and the open‑foam‑cell nature provides a useful amount of pop- and wind-shielding too; a fine inner mesh takes care of the rest.

The C716 is shipped in a sturdy plastic case, with a well‑shaped foam insert to support the mic when in storage. A simple polythene bag is also provided to protect the capsule when not in use, and the fixed output cable is fitted with a Velcro strip to secure the coiled wire — a thoughtful addition.

In use, the overriding impression is of transparency and neutrality. This is a very clean, precise‑sounding microphone that is very crisp and detailed, with a strong upper‑mid presence, but it doesn't sound in any way hyped or unnatural. You can hear the characteristics inherent in its CK12 heritage, and it has a similarly articulate and wonderfully defined sound quality about it that you would associate with a good AKG C12, but it seems less coloured and more faithful in its presentation.

The microphone is quite prone to rumbles passed through from the mic stand and the cable, so it would pay dividends to take care over the mounting and cable‑dressing arrangements. Suspending the mic upside down from a tall overhead stand might provide the best results for vocal work, and a good high‑pass filter will earn its keep with this mic too!

I was very pleasantly surprised at how benign the mic is to off‑axis spill: there's nothing really nasty or peaky in its off‑axis response, so it will play nicely with other mics in that respect. Close vocal working is no problem, with a very modest and gently flattering proximity effect, but while the innovative grille serves moderately well as a pop‑screen, I found it worthwhile to use a proper external pop‑screen on close vocal work. I found the C716 worked very well with a broad range of vocalists, both male and female, and this is always the sign of a true high‑quality microphone. Some mics will sound fabulous with a specific vocalist but terrible with another, while a true all‑rounder, like the classic U87 or an early C414, will deliver very workable results on pretty much anything — and the same appears true of the C716.

I found it worked extremely well with just about everything I put in front of it, from spoken word and vocals of all kinds, to percussion, acoustic guitar, piano, organ Leslies, electric guitar and bass amps, cello and clarinets! It's a bit too chunky for close drum miking, although it worked well as an overhead (it's shame I only had the one to try out, really).

There's nothing not to like about this microphone apart from the fixed cable and, possibly, the price. It is a seriously nice‑sounding mic with all the detail and presence you could wish for, with a beautifully balanced bottom end and remarkable mid‑range transparency, yet without any obvious vices or coloration. Microphones of this quality are few and far between. I want one, and you will too if you audition it!

Josephson's other 7‑series microphones are worth considering, of course, although the switchable omni/cardioid C715 uses an entirely different capsule design and has a very different sound character as a result, even though the body design is very similar. The C700A and C700S models use multiple capsules with separate outputs to allow post‑production changes to the effective polar pattern, and as the figure‑of‑eight capsule employed is similar to that in the C716, a similar sound character is evident.

Comparable models from other companies include Brauner's VMX Lite, the superb Microtech Gefell UM930 and the AKG C12VR — although the last two would push the budget up a fair bit. The ever-popular U87 would come in well below the C716, however.

The Josephson C716 is a serious high‑end microphone that shares some fundamental DNA with the classic C12, but with a range of very thoughtful improvements to the capsule design and electronics teamed with Josephson's superbly innovative and unique metal‑foam grille design.