When your live show requires plenty of punch and power, this 2000W system should give you everything you need. 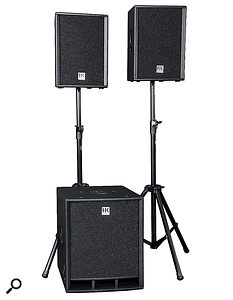 HK's LUCAS PA systems come in various sizes, with the Alpha being the largest and most powerful in the range. It follows the LUCAS format of a single subwoofer plus two satellite speakers, and is self-contained, in that all the necessary power amps and system‑control DSP reside inside the sub. By way of performance, it sits somewhere between HK's Premium Pro and their up‑market Actor range.

Each of the two top cabinets uses a 12‑inch Neodymium driver plus a 1.4‑inch BEM constant-directivity horn, and is also fitted with HK's DuoTilt pole‑mount sockets, offering a choice of two tilt angles: three or seven degrees downwards. In most venues, this is enough to keep the sound on the audience and off the ceiling.

The subwoofer provides the low‑end energy, with an 18‑inch cone and a Neodymium driver powered by 1200W of Class‑D amplification. The sub enclosure also houses a pair of 400W amps to feed the tops. SPLs of in excess of 130dB are quoted for the complete system, making it very loud indeed, and Class‑D amplification all round means that this volume is created in an efficient manner.

The HK Audio DDO System Controller at the heart of the system helps things along nicely, by evening out the speaker response, as well as looking after the crossovers and protection limiting. There are also two EQ settings available as presets — one for live music and one for recorded music reproduction — which makes the system flexible and well suited to both bands and DJs. 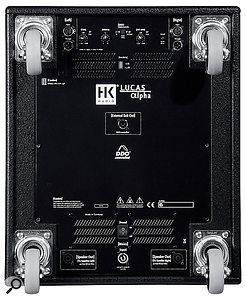 The Alpha sub houses all of the amplifiers and controls for the system. Note the four castors, which help when transporting the heavy unit.

The cabinet construction follows a familiar HK formula: 18mm plywood for the tops, with foam-covered metal grilles and handle recesses cut into the cabinet sides. The DuoTilt pole‑mount socket is fitted to the bottom of each 'top' cabinet, and there's a recessed rear panel housing a single Speakon connector, which is wired for 2‑pin operation. A smart, black, textured paint finish offers a reasonable resistance to scuffs and is fairly easy to touch up if the cabinets manage to accumulate some chips.

The sub is also made from 18mm plywood, with a port running across the bottom of the cabinet. Handles are formed into the top and bottom of the cabinet as well as the sides, and there's a standard screw‑in pole‑mount socket on the top. Four four‑inch castors are fitted to the rear panel, so in order to move it around, you tip it backwards. The rear-panel controls are set in around 18mm from the wooden cabinet edge, offering some protection for the Gain and Balance pots (controlling the tops) and the subwoofer Level pot.

A slide switch here lets you set the useful Live or CD EQ modes, and there's a processed‑sub output XLR for direct connection to a second powered sub, as well as a ground‑lift button. There are stereo XLR inputs and thrus, Speakon outputs for the two tops, and a Powercon mains inlet. In my experience, most music stores have never even heard of Powercon mains connectors, so it would be wise to buy a couple of spares to keep in your emergency bag.

This PA is no lightweight, weighing 96kg, but it will fit into a typical estate car. Of course, if you're going to spend this much on a PA system, it's definitely worth investing another £139a little more in the accessory pack, including speaker pole, stand, bags and covers.

System setup is easy enough, requiring one standard pole and one tripod stand for each of the tops and a couple of Speakon cables to connect them to the sub. The single Powercon cable runs the whole system, while two XLR leads from the outputs of your mixer to the signal inputs on the sub complete the cabling. When it comes to handling, the tops are OK for one person to manage, but the sub is best moved by two.

I tested the system at Malvern's West Fest on the acoustic stage. It was set up at the end of a 10-metre x 30-metre tent, and though it is called the acoustic stage, some of the acts were rather loud bands complete with drum kits and DI'd bass guitars. At the same time, we used an HK Elements system for crossfill monitoring, a job it performed admirably well and with great clarity. The final result was that the sound on the stage was pretty much the same as the sound in front of it.

By the end of the day, the sound levels had crept up and the tent was packed, but the system coped beautifully, with a tight, confident bass and excellent clarity in the mid-range and high end. It never sounded strained, and everyone was amazed at the clout the single subwoofer delivered. Even at the other end of the field, it sounded very good indeed! The LUCAS Alpha system definitely has the edge on my own HK Pro setup (which in itself is a great performer), and it even gets close to the performance you'd expect from the high‑end HK Actor system on the main stage.

So is there anything I didn't like about the system? Just one niggle, really: on slightly uneven ground, as is commonly found at outdoor events, the speakers can twist around on their poles, as there's no clamping mechanism to secure them. This means you can end up with bits of gaffa tape stuck underneath the tops! Other than that, the system did everything asked of it, and more, incredibly well, so I'll be sad to see it go back.

The closest alternatives I've tried are models by fellow German company Fohhn, such as the Xperience range, which can be configured with single or dual subs in varying power and price combinations. There are many wooden top and sub systems out there, though, including some notable models from Mackie.

The LUCAS Alpha is an excellent PA for larger pub gigs, clubs, and other venues where a 2kW system is suitable. It delivers a surprising amount of low bass from the single sub, while the tops remain clear at all levels, and live and CD EQ modes make it a versatile setup. In short, if you're looking for a relatively high‑end portable PA, the LUCAS Alpha won't disappoint.