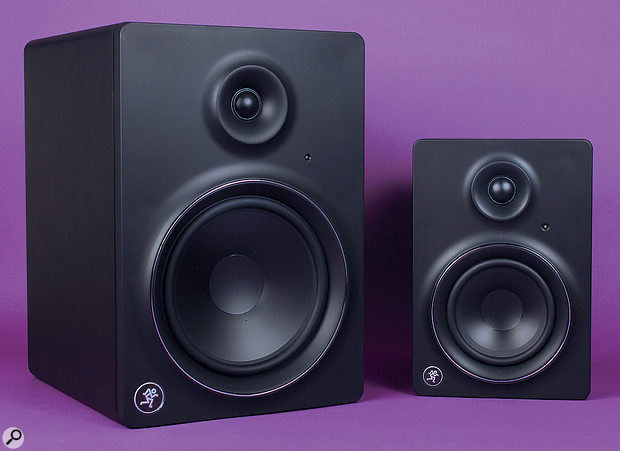 Mackie have updated their MR range of affordable powered speakers, endowing these Mk2 versions with new drivers and re‑voiced amplifiers. We put them to the test...

Mackie's MR Mk2 active two‑way monitors are designed to offer reliable but affordable monitoring for those whose budget won't extend as far as one of Mackie's HR models. Their design brief was to offer a well‑balanced tonality with adequate low‑end punch, and to achieve that aim, Mackie's engineers have used new drivers. A ferro‑fluid‑cooled, silk‑dome, neodymium tweeter is mounted in a shallow waveguide and teamed with a hyperbolic‑curved cone woofer. The woofer has an inverted dust cap and long voice coil designed to provide linear operation over a long excursion range.

Apparently, Mackie and their Massachusetts‑based sister company EAW worked together on this project, although manufacturing is done in China to keep the cost to the end user as low as possible.

Both versions of this speaker offer the same user adjustment facilities. HF and LF controls on the rear panel allow the monitor performance to be tweaked for either model to match room placement and personal listening taste. The HF control can be set to ‑2dB, 0dB or +2dB above 5kHz, while the LF switch can be set to 0dB, +2dB or +4dB below 100Hz. The power switch (and IEC inlet) is also on the rear panel, as is the input‑gain trim knob, which has a centre detent. It is also possible to select a nominal AC operating voltage of 115V or 230V. 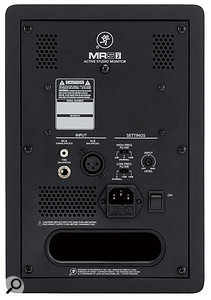 Here you can see the rear panel's slotted port vent.Inputs are present on XLR, balanced jack or RCA phono, and there's magnetic shielding to minimise the interaction of the speaker's magnetic flux with CRT monitor screens and other sensitive equipment. Both models feature a slotted port at the bottom of the rear panel, the opening of which is moulded with rounded edges to reduce port noise. Rear porting further reduces port noise by pointing the port away from the listening position, but this also means that speakers need to be mounted a few inches from walls rather than being pushed right up against them.

The MR5 Mk2 is based around a 5.25‑inch woofer and a one‑inch, silk‑dome tweeter. The integrated amplifiers are analogue 'chip' type devices that include active protection circuitry, and of the 85W available, 55W is sent to the woofer and 30W to the tweeter. A 24dB/octave active crossover operates at 3kHz for both of the speakers under review. While the bass extension of the MR5 Mk2 isn't as great as that of its eight‑inch sibling, the MR8 Mk2, both speakers have been designed to give the same family sound. The quoted frequency response for the MR5 Mk2 is 50Hz to 20kHz, and the specs claim a maximum SPL per pair of 116dB (at one metre).

The MR8 Mk2 uses an eight‑inch woofer, again alongside a one‑inch, silk‑dome tweeter. Up to 100W is available for driving the woofer and up to 50W for the tweeter, and Mackie quote a frequency response of 40Hz to 20kHz for the MR8 Mk2, with a maximum SPL (per pair, measured at one metre) of 119dB.

Putting the MR8 Mk2s up first, it soon became obvious that for the best results they need to be angled correctly and supported on rigid speaker platforms. With this done, the stereo imaging is exceptionally good, with a surprisingly solid phantom centre image and plenty of front‑to‑back perspective. I felt the bass end was a little under‑damped, an issue with many lower‑cost speakers, but turning the tweeter level up to the +2dB settting improved the overall balance and made it sound subjectively closer to that of my own monitors (which are set flat), at least in my room.

My tests were done with the Mackie speakers set up well away from walls and corners. When mounting closer to walls and corners, which can cause the bass end to sound overblown, a little acoustic foam or loose fabric stuffed into the ports may well help tighten the lows. I left the bass switch set to flat, and couldn't help but wonder if the bass switch might have been more useful had it included a cut position rather than two levels of boost.

All this has to be put into perspective with the price, of course, and the reality is that I soon adjusted to the character of these speakers after listening to some commercial tracks played through them. I really liked the three‑dimensional sound of the speakers, the detailed but non‑aggressive highs, and the overall balance. The low-mids sounded a little more congested than on more esoteric speakers but, again, this is nothing you wouldn't adjust to very quickly. I'd place the MR8 Mk2's performance better than midway between entry‑level speakers and Mackie's more professional HR‑series monitors, and their size and bass response would suit larger project-studio rooms, such as garage conversions.

Switching to the MR5 Mk2s revealed a generally similar family sound, other than the more restrained low end — which I have to say I actually preferred! Having less bass allows the mids to come over more clearly, delivering a tighter overall sound, but unlike many other five‑inch monitors, some of which have very small cabinets, these are still physically large enough to provide adequate low‑end response for smaller rooms without any tendency to sound boxy. Again, the stereo imaging is exceptionally solid.

If you're after an affordable monitor but don't want to skimp by buying something too cheap that you might later regret, both of these Mackie models perform well given the price range they inhabit. The larger MR8 Mk2 model is best reserved for larger rooms, while the MR5 Mk2 is ideal for many small and medium‑sized rooms, especially if used up close. While there are inevitable compromises when building a speaker to this price point, the reality is that both models do a good job of letting you know how your mix really sounds, and your hearing system will have no problem tuning out the subtle tonal anomalies. If you like the idea of a Mackie HR‑series monitor but can't justify the price, you might find that these MR Mk2s get you close enough for significantly less outlay.

There are so many alternatives that it is hard to know where to start, but the closest models in terms of both performance and price probably come from Alesis, Fostex, Tannoy, M-Audio and KRK.