NI's take on the Holy Trinity of compressors adds some neat extra features that make them more versatile. 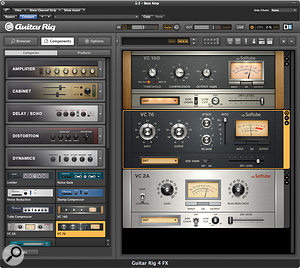 Like most of NI's recent plug‑ins, the Vintage Compressors need to be run within a host such as the free Guitar Rig Player 4.

Vintage Compressors from Native Instruments was created in collaboration with Softube and comprises plug‑in emulations of three classic compressors: the Urei 1176, Teletronix LA2A and Dbx 160. Designated VC76, VC2A and VC160 respectively, the plug‑ins are available separately or as a bundle at a discounted price. Unlike most conventional plug‑ins, however, they have to be hosted by another NI plug‑in that has an effects rack, such as Guitar Rig 4. If you don't own any other NI products, you can download and install the free Guitar Rig 4 Player for this purpose.

Softube have an enviable reputation for high‑quality modelling, but for these compressors they've also included some features that aren't present in the hardware originals. A side‑chain input has been added to all three models for the creation of ducking and similar effects, as has a parallel compression feature that allows the dry sound to be mixed with the compressed sound, an approach that's currently very popular. The usual technique is to set the compressor to produce massive amounts of compression, then mix it back in with the dry sound at around ‑15dB. The low‑level compressed signal adds weight and thickness to the sound, but the original retains its dynamics, so peaks are not crushed. Having a wet/dry mix control built into the compressor means you never have to worry about delay mismatches and the phase problems they create. The extra controls drop down below the main plug‑in window, where there's also the option to place a low‑cut filter in the side‑chain.

The plug‑in windows leave you in no doubt as to which hardware units are being modelled, although their layout differs slightly from the hardware versions. The old 1176 worked on just about anything and always managed to make things sound a bit larger than life, as well as being good as a stereo limiter. As with the original, this model has the four ratio‑select buttons, attack and release controls, a threshold control and make‑up gain. The VC76 recreates the 1176's punchy and clear sound with its fast attack, and the now famous 'all buttons in' nuke mode for extra-heavy compression. There's also a 'no button' 1:1 mode that allows you to capture the character of the 'analogue' signal path, but without compression.

NI's VC2A models the LA2A electro‑optical tube compressor and, as on the original, the attack and release are non‑adjustable but are programme‑dependent to some extent. There are only two variable controls — Gain and Peak Reduction — plus a switch that puts the compressor into Compress or Limit mode. The non‑linear release of the opto circuit gave this compressor a distinct but very musical sound, sometimes described as silky.

The VC160 is obviously based on the Dbx 160, a classic VCA design with a threshold that is continuously adjustable all the way from no compression to hard limiting. Best known for its ability to add punch and attitude to drums and bass instruments, the 160 is still used across a wide range of musical styles.

The general character of these plug‑ins certainly reflects the traits of the originals very closely, but more importantly, they sound extremely musical, regardless of how close or otherwise their performance might be to their hardware inspirations. The VC160 adds both weight and attack to drums and basses, and the parallel compression option allows it to go even further than the original in this respect. The same is true of the VC76, which follows closely in the footsteps of the 1176, right down to the 'all things must die!' all‑buttons‑in setting, which makes a great basis for parallel compression. The VC2A is a little more genteel, adding polish rather than menace, again in much the same way as the original.

Although there are subtle differences in sound between other leading emulations of the same devices and these Softube recreations, I think to get too hung up on absolute accuracy would be to miss the point. (In fact, given that there is plenty of variation between different examples of the same hardware units, it's questionable whether it even makes sense to talk about absolute accuracy.) From an engineering perspective, these NI/Softube plugs deliver exactly the right kind of results, and hold their own against any of the competition in terms of musicality. What's more, the side‑chain and parallel compression additions, while not in any way authentic, add to their usefulness in real‑world mixing situations. I'll certainly be making use of them.

There are lots of other plug‑in emulations of the same vintage compressors, especially the 1176 and LA2A. Universal Audio's UAD system includes officially licensed emulations of all three, while other manufacturers such as Waves and IK Multimedia offer their own takes on the classic designs.

These are great‑sounding emulations that are all the more powerful for their extra side‑chain and mix features.