KMI's K‑Board Pro 4 offers one of the most cost-effective ways into the enticing world of MIDI Polyphonic Expression.

MPE (MIDI Polyphonic Expression) has been rearing its head as a concept ever more frequently in recent years, driven largely by innovative MIDI controllers like ROLI's Seaboards, the Linnstrument, and the Haken Audio Continuum. MPE is an extension, now officially adopted, to the standard MIDI specification that dates all the way back to the early 1980s. In essence it's a scheme that assigns each played note its own MIDI channel, to allow independent finger-driven vibrato and bends, polyphonic pressure/aftertouch, and generation of CC messages from front-to–back finger-slides, using a suitable 'expressive' control surface. For many styles, an MPE controller can be responsive and musically intuitive in a way that a conventional piano-style controller can't match.

The Keith McMillen K‑Board Pro 4 is, at the time of writing, the most recent MPE controller to come to market, but it's not the California-based company's first. The tiny, low-priced QuNexus has been available for some years, but its two octaves of pad-like keys don't necessarily appeal to serious keyboard players. Interestingly, the K‑Board Pro 4 (which I'll refer to as the KBP4 from now on) first came to light as a Kickstarter project back in 2016. Whilst it took a longer time to become a reality than was originally envisaged, it's very much here with us now, and shipping in good numbers.

Compared to the QuNexus, the new controller is a different kettle of fish. First off, it's physically much heftier, at 66 x 21.5 cm, with a four–octave keyboard (though one that unusually spans C to B, rather than C to C). The keys aren't pads any more but more or less full piano–key-size silicone strips, which, despite standing proud of a smart metal casework by a few millimetres, don't actually move. They're supplemented with four backlit 'slider' strips running horizontally above the keys, which let users tweak settings in real time. For many users, the KBP4 will find a natural role tethered to a computer DAW setup, but it also has the potential to flourish in hardware-based rigs as well, in conjunction with a dedicated MIDI Expander (see the 'Hardware Store' box). Either way, it's USB-powered, can store four presets in hardware that recall different modes of operation and controller mappings, and has dedicated sockets for one switch-type pedal (of either polarity) and one expression pedal. The 'cyberman ears' design you may have seen in some prototypes, incidentally, did not make it through to production: something I feel relieved and sorry about in equal measure. A dedicated hard case is available for around £150$149.

Examining the 'keys' in a bit more detail, they both look and feel slender, and are measurably so as well. Where a standard synth's octave spacing (measured from the middle of two adjacent Cs, for example) is 165mm, the KBP4's is a svelte 154mm, and front to rear the naturals measure 128mm. The blue-topped sharps are particularly narrow and sit proud of the naturals by a couple of millimetres. Key surfaces are lightly textured, but allow the fingertips to easily slide back and forth. As I mentioned, the keys don't move in the traditional sense, and there's no 'mechanism' as such. Striking a note or chord feels like tapping or touching an inert surface like a tabletop, but applying pressure reveals a slight give, up to about a millimetre perhaps. Nothing like as much as a ROLI Seaboard's malt–loaf sponginess, but noticeable none the less. As for the horizontal control strips, they're shallower, have even less give, and clearly aren't designed for the same kind of expressive physical interaction.

It's interesting to note, by the way, that the KBP4's keys really are discrete sensor arrays. In that sense the overall design is fundamentally different to the Seaboard, Linnstrument and Continuum, all of which are continuous surfaces (in one way or another) marked up with semitone pitch divisions. This changes some of the things that are possible in musical interactivity terms — I'll come back to this later. 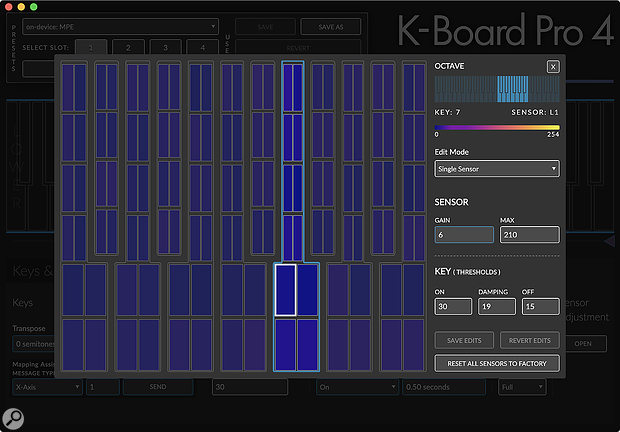 It turns out there's 12 sensors for each KBP4 key that, should you wish to, you can individual tailor to your touch. For experts only, I would hazard.

Attaching the KBP4 to your computer via its micro–USB port immediately illuminates white LEDs under the horizontal slider strips, but there's no indication at this stage as to what they relate to. To find out, and to generally take control of all aspects of setup you need either the downloadable Mac OS or Windows editor application, or a Web MIDI-compatible browser pointed at a particular URL on the KMI website. All three offer exactly the same programming facilities, via a very smart grey/blue/purple themed interface, with sections for configuring presets, touch response, pedals and global settings. A central diagram of the four octave keyboard does more than set up upper and lower keyboard splits: it actually visualises key-presses in real-time, with coloured circular 'flowerheads' appearing exactly where your fingertips lie, and growing or shrinking in size with varying pressure.

It may have had a long gestation, but the K‑Board Pro 4 has come into the world capable, mature and beautifully finished.

Without going into great detail (because KMI's excellent PDF manual does that very nicely) it turns out that the KBP4 is massively configurable. Those mysterious horizontal sliders for example: each can become a preset selector, a global pitch-bend strip, a transmitter of any CC message you like, or a controller of one of five other parameters including octave transposition. Cleverly, the 12 hardware LED backlights in each slider configure themselves appropriately according to mode. For example, CC sliders light more or fewer LEDs left to right, level-meter style, to indicate current value, but the four position preset selector configures its LEDs as four sets of three, non-overlapping, for a kind of virtual 'radio button' effect. Pedals, meanwhile, can be only be set to generate CC messages, but you get to choose which.

Let's talk about the main event here though, the keys. Configuring their overall response is done separately for X axis left-right 'wiggle' (KMI's terminology), Y axis front-back slide, and Z axis pressure. Pitch-bend, CC messages, Channel Pressure and Poly Aftertouch are all up for grabs (though some exclusively for the axes to which they're best suited). Added to that, there are sophisticated options for amplifying, limiting, and generally tailoring gestural response. The terms Relative and Absolute that appear here relate to the scaling between finger position and generated data values. Relative means that an initial value (configurable) is generated regardless of where you place your finger, and then increases or decreases according to any subsequent movement. Absolute just tallies data values directly with finger position. The musical implications of all these kinds of configuration are too numerous and subtle to discuss here, but the important thing is that the KBP4 should allow almost any type and behaviour of touch response to be dialled in, and it's the most flexible implementation I've seen in any MPE controller.

The key response itself is impressively sensitive and reliable. With factory settings, your very lightest touches (we're talking late-stage Jenga...) aren't registered, which can allow fingers to be carefully placed in position prior to playing. But then a force of anything more than just a few grams will trigger a touch, with all position changes, in all axes, faithfully represented. A threshold setting in the editor's Advanced tab lets you adjust that initial touch though, which can help avoid false triggers if you're a little heavier of hand. The only strangeness I saw (which never came up in normal playing I must add) was that initial touches on the very back 8 or 9 mm of the keys are sensed as being on the front edge. Strange, given that slides to the very back of the keys from a starting point further forward are never misinterpreted.

Meanwhile, I found the default pressure response to be beautifully graded and super-controllable. It's a particular treat when compared to typical all-or-nothing mechanical keyboard aftertouch.