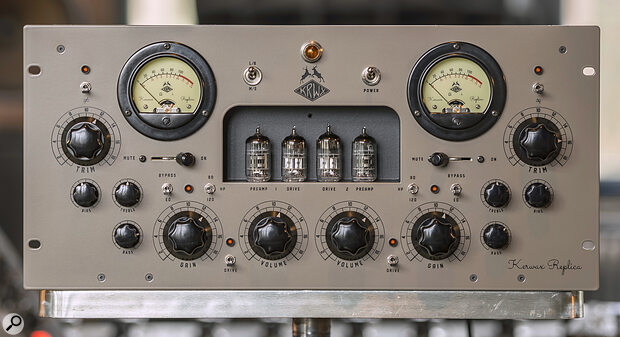 Derived from the custom valve console in Brittany’s famous Kerwax studio, the Replica harks back to a bygone age.

Kerwax is the name of a classy, all‑analogue recording studio located in a former boarding school in Brittany, France. Owned by Christophe Chavanon, the studio pays homage to classic recording equipment of the 1940s to the 1970s, with the centrepiece now being a large, bespoke, wraparound valve mixing desk that was developed by the Kerwax team. (If you’d like to know more about Kerwax, check out our 2015 Studio File article: https://sosm.ag/studio-file-kerwax).

Now, they also make the Kerwax Replica that’s reviewed here, and this device puts a pair of channels from their unique desk into an imposing 5U rackmount chassis. As well as offering two valve preamplifier channels, it features some intriguing creative tools for manipulating your audio signals.

The Kerwax Replica is a line‑level processor, seemingly intended primarily as a device for running stereo mixes or submixes through, to introduce some of the characterful side‑effects of vintage‑style valve amplification. Each channel has completely independent controls, however, so you certainly aren’t limited to stereo applications when recording and mixing. You have the option of running the Replica as a dual mono device or, intriguingly, in M‑S mode, with the left channel becoming your Mid and the right controlling the Sides. 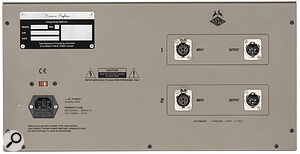 The obligatory rear‑panel pic, with switchable IEC mains inlet and balanced XLR inputs and outputs.The Replica has 18dB of ‘trim’ available at the input stage, as well as a polarity reverse switch for each channel. The output level is displayed on large backlit VU meters, with the valves on display in a recessed ‘shelf’ between them. There’s a high‑pass filter too, offering the options of cutting frequencies below either 80Hz or 100Hz, as well as a simple EQ section that allows for cutting or boosting high and low frequencies with Baxandall‑style filters. Also available is a ‘bias’ control which allows for a little extra manipulation of the valves’ behaviour. Each channel uses two 12AX7 valves with one used at the preamplifier and EQ stages and one for the ‘drive’ section — which can be switched in and out of the circuit. Last but not least, the unit features a substantial bypass/mute switch for each channel.

The Replica arrived at my studio in a large plywood box that set the tone for a product which screams ‘attention to detail’. Occupying 5U of rack space, it is a formidable‑looking, yet also incredibly stylish, piece of hardware. Some might suggest that the valves being visible on the front might look a little gimmicky, but there are practical reasons for having the valves outside of the unit, so why not? As well as ensuring heat from the valves can be easily dissipated, Kerwax encourage users to experiment with the subtly different character offered by different valves in the 12AX7 family.

The large, vintage‑style knobs and all of the switches feel extremely satisfying in use and, despite the minor grumble that I found it hard to read the labelling on the EQ and bias sections in particular, I wasted very little time in getting the Replica patched into a hardware insert on my studio’s patchbay.

I threw the Replica in at the deep end, patching it into my mix bus for the track I was working on at the time, which featured live drums, bass, guitars and piano. I began with the drive and EQ sections bypassed and, once I’d slightly backed off the level of the mix going into the Replica, I was impressed with how the track appeared just that tiny bit more exciting in the 4‑6 kHz range. I could also clearly hear a pleasant ‘tucking in’ of the low‑mids, and it sounded as if there was some inherent high‑pass filtering being applied, with the very low frequencies on the bass guitar feeling a touch more restrained. I lost my nerve slightly when engaging the drive section, as the cymbals, in particular, started to sound a bit too distorted and I found the EQ section didn’t offer anything obviously beneficial on this particular mix. 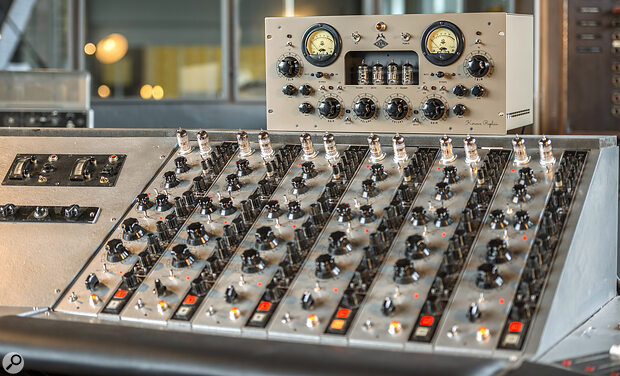 The Replica sitting above the Kerwax desk on which it is based.

It was on a tracking session that I got to use the unit next, and this saw me working with a band over the course of several days. I was keen to have a consistent room sound for this project, to help knit together the diverse selection of instruments I would be recording. To this end, I had a spaced pair of omnidirectional mics positioned in the middle of the live room and I inserted the Kerwax across these mics for the duration of the session. It worked wonderfully, adding a subtle gloss to the room mics that got more characterful — almost compressed‑sounding — on louder sources such as drums and bagpipes (yes, really!). I found myself experimenting with the EQ section a bit more here, as my confidence in the sound of the unit grew and I really appreciated that I was able to back off the top end slightly or add a bit more body via the broad shelving filters.

You have the option of running the Kerwax as a dual mono device or, intriguingly, in M‑S mode...

The Kerwax certainly has something to offer when recording live musicians but I actually found that it had a more substantial impact on proceedings when either mixing or creating programmed electronic or sample‑based material. I loved what it did to a simple programmed drum pattern I was putting together for a track, and the drive section in particular imparted a lovely saturated effect that was well worth the extra effort of patching in a few cables and going outside the box. This became a common theme, in fact, and I found that any soft‑synth part sounded more exciting when I ran it through the Kerwax with the drive section cranked up as far as I dared.

The EQ and bias controls are intended to allow the user more control with shaping the tone of sources as they react with the valve stages. I found the EQ section to be useful in this regard, especially when using the drive section in more of an extreme way. I didn’t personally find them to add any magic when used as more of a traditional, conservative EQ on a mix bus, though, and found it was a similar story when playing with the bias control — it certainly offered some control but was often so subtle that I didn’t really dwell on it.

I also spent quite a while auditioning the Replica in M‑S mode. It’s certainly a useful function, though I often found the results unnervingly dramatic if used on a whole mix. When used for shaping sounds, however, it’s a very creative tool that can change the emphasis of synth parts or drum loops; it’s a feature I could see myself using more of over time.

The Kerwax Replica makes a striking visual impression in a small studio; more than one client asked what ‘that thing’ did. But it’s not merely a talking piece. The characterful drive section and creative tone‑shaping combine to create a tool you could happily use at the writing, performance and production stages, before dialling things back and patching it into your master bus when mixing too, where it can help to knit things together.

The best of the plug‑ins that model analogue saturation tools are seriously convincing these days, and while the differences are real, it’s always a tough call to judge whether the often small gains that beautifully designed hardware such as this can impart are genuinely worth the extra investment. I won’t tackle that question definitively here, but my impressions of working with this lovingly conceived and beautifully engineered unit are nonetheless worth stating. The differences were most obvious to me when I used it to process more electronic and sample‑based music. Indeed, if you’re an electronic producer looking for a flagship piece of hardware to add extra mojo to your productions, the Kerwax could well be precisely what you’re looking for. Don’t get me wrong, I also really liked the subtle valve sheen that it added to acoustic instruments and on a mix bus, but the differences in those scenarios seemed less stark to me, and I’d suggest that it falls more into the ‘pleasant luxury’ than the ‘must have’ camp.

All in all, I couldn’t help but be impressed with the Kerwax Replica and, considering its size and quality, the price isn’t excessive for a professional tool, even if it’s not exactly in home‑studio territory.

The audio files available on this page accompany my review of the Kerwax Replica two-channel valve preamplifier. You can download a ZIP file of the hi-res WAVs or listen to the MP3s below for instant gratification.

For each audio example, I’ve provided a before and after example with the Replica applied as a ‘hardware insert’ in my DAW, using Lynx Aurora converters. In addition, there's a brief description of the settings used for each example.

The same recording run through the Kerwax with the drive section driven hard. No EQ is added.

A stereo polysynth part, taken from a recent project.

The same synth part run through the Kerwax with a high drive setting.

A short instrumental section of a demo I recorded for the band Captain.

The same section through the Kerwax with a small amount of high-frequency boost. The drive section is bypassed.

A brief clip of the track ‘Planetarium’ by Rocco Universal.

The same section processed through the Kerwax Replica with the bass and treble EQ controls at 1 o'clock. The drive section is bypassed.

The Kerwax Replica offers two channels of line‑level amplification ‘lifted’ from the bespoke large‑format mixing desk in the designers’ own studio in Brittany, France. A substantial and impressively well‑built device, the Replica offers a high‑quality valve signal path, along with several useful additional features for imparting character to your tracks.