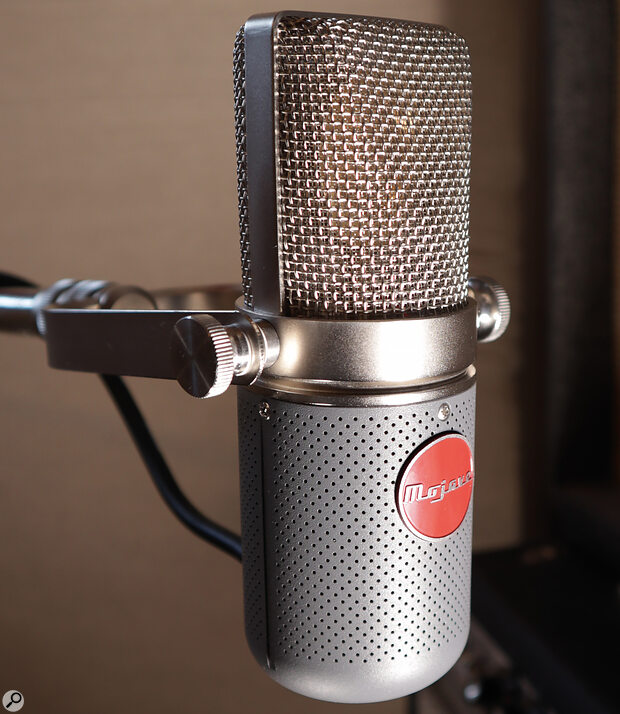 The classic valve mics we all know, love and wish we’d bought before prices went through the roof are mostly European. Mics like the Neumann U47 have become Platonic ideals, eternally out of reach and forcing us mortals to make do with shadowy imitations and inferior copies. Yet even before Neumann discontinued the U47, it was already facing serious competition from a surprising source.

Out Of The East

Like many national broadcasters, the Japanese NHK were heavily involved in developing audio technology after the Second World War. Ribbon mics from this period sometimes surface in the West, and are usually close copies of RCA models, but the first Japanese capacitor mic to enjoy major export sales was a more original design.

Created by NHK engineer Heitaro Nakajima along with Kanane Nakatsuru from Sony, the Sony C‑37A resembled the U47 insofar as it was a large‑diaphragm capacitor mic with a valve‑based impedance converter. However, Sony took a very different approach from European manufacturers. The classic Neumann and AKG large‑diaphragm capsules are all Braunmühl‑Weber designs, in which two tensioned diaphragms and backplates are positioned back to back. These backplates are drilled with complex patterns of holes to create an acoustic labyrinth. Each side of the capsule can provide cardioid pickup, and when both diaphragms are energised, their respective contributions can be combined in the mic’s electronics to synthesize other polar patterns such as omni or figure‑8.

Sony’s design, by contrast, used only a single diaphragm, with a much simpler backplate. Despite this, it still offered a choice of cardioid or omnidirectional polar patterns, thanks to a mechanical shutter which was operated by inserting a screwdriver into the back of the capsule. In omni mode, this blocked off a vent in the rear of the capsule and turned the C‑37A into a pure pressure mic.

There have been small‑diaphragm mics that used mechanical pattern switching, including several Schoeps models and the Shure KSM141. The same principle was also employed in the Philips EL6033/10, an obscure moving‑coil dynamic mic, while Sony’s use of it was possibly inspired by the RCA 77 ribbon mic. As far as I know, however, the C‑37A and its derivatives are the only large‑diaphragm capacitor mics that operate this way.

Sony’s distinctive design approach also extended to the mic’s impedance converter, a 6AU6 pentode valve wired as a triode in a cathode follower circuit. In this configuration, the valve can supply current gain but not voltage gain. This means the output level of a cathode‑follower mic is typically very low, but on the plus side, it allows the output transformer and other electronics to be located at the other end of the mic cable, within the PSU. For this reason, European mic manufacturers tended to employ cathode‑follower circuits mainly where there was a need for the mic to be as small as possible, such as in the AKG C60 and C12A.

This choice on Sony’s part seems, by accident or design, to have helped the C‑37A catch on in the US studio market. At its launch in the late ’50s, most American studios were still using consoles and preamps created to work with passive ribbon mics. With close‑miking coming into vogue, the C‑37A’s low sensitivity and high headroom made it easier to handle than the hotter European mics. Its relative simplicity also made it competitive on price.

Though it never seems to have made inroads in Europe, the C‑37A achieved widespread popularity in the USA, where it was used on countless classic recordings. Other Sony models also enjoyed some vogue through the ’60s and ’70s, but Neumann and AKG eventually reasserted their market dominance. Perhaps as a result, the C‑37A remained something of a ‘sleeper’ while other valve mics such as the U47 and C12 were being rediscovered in the ’90s. This particular sleeper, however, has long since been roused from slumber, and if you can find an original C‑37A for sale, it will now set you back many thousands.

One of the reasons why C‑37A prices are so high is that, until recently, no‑one was making a modern recreation. The Chinese suppliers who churn out K47 and K67 copies have yet to produce a version of Sony’s distinctive single‑diaphragm design, and of the Western high‑end specialists, only David Josephson seems to have tackled this particular capsule.

This situation may be about to change, however, thanks to another David. Most of us associate David Royer...