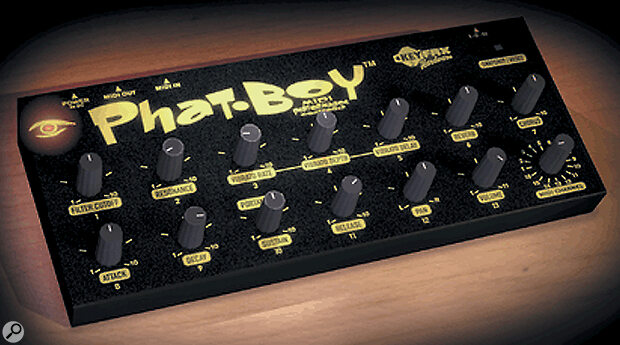 Paul White takes a turn on a hardware controller box which allows knobularly‑challenged GS and XG synths and soundcards to join the rotary club.

For years now, Keyfax have been bringing us the excellent Twiddly.Bits series of bite‑sized MIDI 'samples' that you can cut and paste into your own compositions. Now, they've come up with a piece of hardware that gives you lots of Twiddly.Bits too!

Phat Boy is a box of hardware knobs dedicated to controlling those parts of a GS or XG synth normally only accessible via edit menus or mixer maps. The advantage of a hardware control surface like this is that it's easy to make real‑time changes to parameters like filter cutoff frequency during a performance. What's more, all the controller data can be stored as part of a MIDI sequence, so any real‑time sound manipulation is duplicated on playback.

The Phat Boy is also useful for general editing. Once you've set up a sound, a Snapshot button allows you to squirt the whole set of controller data to your sequencer. Put this in the count‑in section of your song and the appropriate sound will be recreated as your sequence begins to play, even if the patch wasn't actually saved in your synth in the first place.

Despite its name, the physical incarnation of the Phat Boy is a rather slim steel box, powered by an external wall‑wart power supply and fitted with MIDI In and Out sockets on the back panel. Whatever you send to Phat Boy's MIDI In — usually information from your master keyboard — is merged with the Phat Boy's controller information and sent through its MIDI Out.

Also on the back of the box is a three‑position switch that sets the mode of operation for the unit. Mode 1 is for Roland GS or Yamaha XG synths; Mode II is specifically for Creative Labs AWE 32 or 64 soundcards; Mode III turns the Phat Boy's controls into assignable continuous controllers for use with external software such as Rebirth, Steinberg's TB303/TR808 emulator program. Incidentally, the Keyfax web site has a long list of devices with which the Phat Boy is known to work.

Phat Boy is accompanied by a Twiddly.Bits style disk that contains a large library of riffs and loops drawn from the Twiddly archives, along with a number of utilities, such as MIDI messages which switch XG machines into TG300 GS mode, others which switch tracks 9 and 11 into drum mode, and a GS reset message. This collection of software is great for anyone just starting to get into music, as it enables you to experiment with track composition right away. More experienced users may also find the disk useful for checking out the Phat Boy's functions.

After all that preamble, the final section of this review promises to be fairly short, since Phat Boy proves to do just what it says on the tin. I tried it with a Yamaha MU10 GM/XG module, and found it really was a simple case of plug and play. Frequency and resonance can be altered in real time after a note has been struck, and there is no obvious 'zipper noise' to betray the fact that MIDI 'sweeps' in steps. The same is true of volume, pan, reverb and chorus. Modulation depth, however, can only be adjusted prior to striking a note — once a note is sounding, turning the knob makes no difference.

To summarise then, Phat Boy and its accompanying thin floppy put a lot of control directly into your hands. Although the number of parameters you can access is relatively limited, in practice it gives you a lot of scope to push and pull sounds into shape. Hardware control of the filter makes techno clichés a doddle, and the Snapshot button is great for saving patches as part of your MIDI sequences.

Buy one of these and you'll discover that GS/XG synths aren't nearly as boring as you thought they were!

There's one point that needs to be made about Snapshot mode: if you don't twiddle a knob, no controller data will be sent out, and there will be no overall effect. Before starting a snapshot, it's important to move each knob, then turn it to the position where the right effect is produced. Failure to do this will simply store the physical knob settings as your new snapshot, even though some of the knobs may be set at values quite different to the parameters the synth is set for.

A genuinely useful controller that greatly expands the tonal repertoire of any GS/XG synth or soundcard.