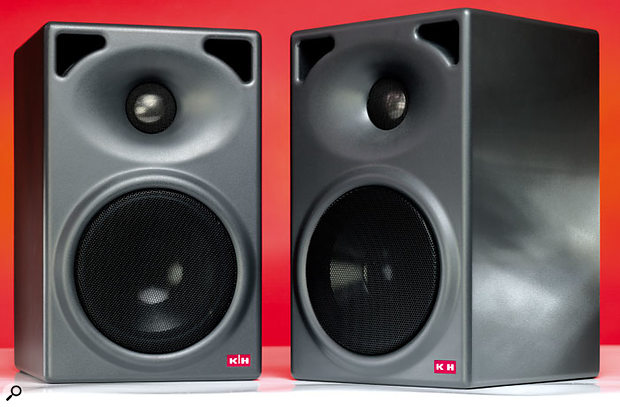 These monitors may be small, but they punch well above their weight.

Horst Klein and Walter Hummel set up their Stuttgart company to make studio monitors and PA loudspeakers back in 1945, but my only experience of K+H monitoring to date has been the O 300D system (reviewed SOS October 2004). That particular model — a compact, three-way active design, with a sealed cabinet and digital inputs — is still available, and still provides seriously impressive reference-quality monitoring, despite its modest dimensions. In fact, I was so impressed that I was reluctant to return them after that review, and have been tempted to buy a pair ever since. So when I was offered the chance to audition the O 300D's junior sibling, I was very eager indeed.

The two-way O 110 model is a reflex-loaded design, with corner ports either side of the tweeter. Each MDF cabinet measures 268 x 170 x 190mm (giving an internal volume of about 6.5 litres) and weighs 5kg so, although compact, these certainly aren't flimsy. The cabinets are finished in a hard-wearing, anthracite enamel paint (white and silver finishes are also available) and metal grilles protect the drivers. The steel amplifier chassis set into the rear carries a modest heatsink, the (fixed voltage) mains and signal connectors, and a pair of threaded inserts to facilitate wall-mounting. A comprehensive array of brackets and other mounting hardware is also available.

The speaker's front baffle is made from a material referred to as 'Low Resonance Integral Moulding' (or LRIM), which has been machined to produce an elliptical waveguide for the tweeter. This ensures mechanical time alignment between tweeter and woofer, while also controlling the dispersion: wide horizontally, for good imaging; narrow vertically, to minimise reflections from the mixing console surface. 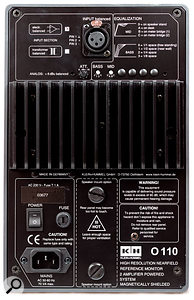 The rear panel of the review model of the O 110.The magnetically shielded 145mm bass driver has a sandwich-membrane diaphragm which, combined with an unusually long voice coil, is claimed virtually to eliminate harmonic distortion. The 25mm composite tweeter is cleverly engineered, too, apparently combining the transparency of titanium with the low distortion characteristics of a fabric dome.

Each driver has its own amplifier and both are conservatively rated at a continuous 50W (for THD below 0.1 percent). Separate protection limiters in each amp are optimised for the characteristics of their respective drivers, and their activity is indicated by the illuminated K+H logo on the front panel blinking on and off.

The active crossover is tuned to 2.5kHz with fourth-order slopes, but the low-frequency (LF) response can be fine-tuned to suit the room. The bass roll-off can be increased below about 500Hz by 0, 2.5, 5 or 7.5dB to compensate for boundary loading, and a gentle, bell-shaped cut can be applied to the lower mid with 0, 1.5, 3 or 5dB settings. The overall free-field response is given as 56Hz to 24kHz ±3dB, which is surprisingly respectable for such a small box, and the published frequency plots are remarkably flat. The waterfall spectral decay also shows a clean, fast decay above 400Hz, and very good damping of the port and LF driver. The rated maximum SPL is 107dB at one metre for three percent THD — which is more than enough for a nearfield!

As with most K+H professional monitors, there are various input options. The review model was the basic version, with an electronically balanced input on an XLR. A rear-panel control allows the sensitivity to be adjusted from +6 to -18dBu. However, an input transformer can be specified as an option, if required, and the 'D' model adds a digital input. Unusually, this shares the same physical input XLR, to accept AES3 or S/PDIF signals. A screwdriver switch on the rear panel is used to determine whether the analogue or digital input is used, and in the case of the latter, it also selects the left, right, or mono sum of the digital channels. The internal D-A converter accepts sample rates from 32 to 96kHz with 24-bit resolution, and a BNC socket provides an unbalanced digital 'through' facility to link with a second monitor.

I assume that the O 110 D's digital input facility is similar to that of the O 300D and, if so, despite the unusual arrangement, it should work perfectly and with excellent sound quality.

Initially, I rigged the O 110s alongside a pair of similarly-sized PMC DB1 monitors (powered by Flying Mole amplifiers), as these are a familiar reference for me. I used them both during a SADiE editing session for a choral CD and was immediately impressed with the scale, depth and accuracy of the stereo images the K+H monitors produced, and the wide 'sweet spot' listening area they allowed. The sound was transparent and neutral, detailed and precise — but without any 'hyping'. In fact, their sound character has a lot in common with the venerable British designs from the likes of ATC, Harbeth and, indeed, PMC.

Later, I played a wider variety of material through the little K+H monitors and was impressed further by their capabilities. Solo voices were portrayed in a very lifelike way, with solid, three-dimensional images and a complete absence of coloration. Bass instruments were also carried surprisingly well (although obviously without the weight of a larger monitor) and serious quantities of air were being moved through those corner ports! Bass guitars were tuneful — not one-note affairs — and kick drums were clearly defined and solid.

However, it is worth noting that the O 110 speaker only really delivers its best when the monitoring level is above a certain threshold. Like most reflex cabinets, lower listening levels appear to reduce the efficiency of the bass driver significantly, resulting in a rather bass-light balance. This was the one area in which the O 110 lost out significantly to PMC's DB1 (it is hardly a fair comparison, since PMC's speakers are virtually unique in being able to maintain an almost constant spectral balance regardless of listening level, thanks to the strange characteristics of the 'Advanced Transmission Line' design they use). For those who require deep, powerful bass, the K+H O 800 subwoofer forms a perfect partner for the O 110s, and includes the appropriate crossover filtering.

The overall tonality of the O 110 seems to be voiced fractionally brighter than the DB1 at the extreme high-end, but this only draws attention to itself when listening at silly volumes, whereupon it can sound a bit strident. Overall, though, these diminutive monitors are extremely clean, accurate, well-balanced, and very impressive: they are certainly well worth auditioning.

Most monitors that match the sonic quality of the K+H O 110s cost significantly more, but on the list would be the ATC SCM20As, Harbeth Monitor 20s, PMC DB1s and Geithain ME25s.

These diminuitive monitors represent extremely good value for money, in that they achieve a sonic performance to rival peers at a much higher price point. Although small, they deliver a surprisingly big sound, and with a very transparent and neutral soundstage.