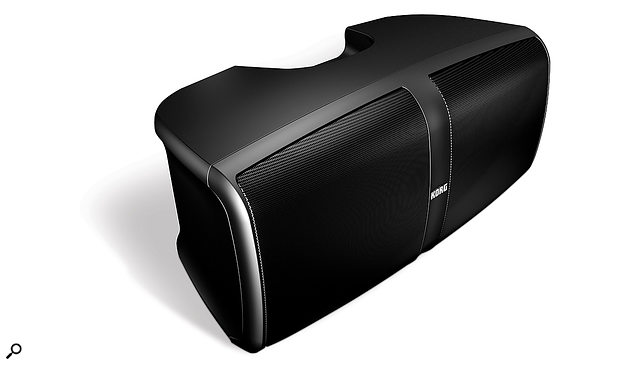 Korg's new mini PA is as versatile as it is compact and portable.

The Korg Konnect is a portable stereo sound system, styled as a large 'ghetto blaster' and rated at 180 Watts peak or 90 Watts continuous power. It manages this by incorporating a central 6.5‑inch woofer in a reflex enclosure, with one-inch tweeters placed on either side. A pole‑mount socket is located in the base of the plastic casework, but the speaker is just as happy sitting on a desk or table.

Designed to meet a number of needs, from small 'coffee‑shop' PA and dance groups to exhibitions and presentations, the Konnect weighs just 5.13kg and is only 452mm wide. Power comes from an external power adaptor that connects using a simple push-in barrel connector, but I feel the designers have missed a trick by not including a place to stow the PSU in the case itself (a carrying bag is available as an optional extra). I'd also expected the option of battery operation, but it seems that isn't catered for.

The Konnect features a built-in mixer with a choice of EQ presets for specific sound sources and a selection of effect types including reverb. All the processing is carried out at 32-bit resolution by a SHARC DSP section. Although it doesn't have the kind of physical EQ controls you'd find on a stand-alone mixer, there is a free control app available which allows for more in‑depth editing, including detailed adjustment of the internal five-band EQ section. The app, which requires at least iOS 8.1 or Android 5.0, also permits wireless control from a smartphone or tablet.

There are five preset voicing types, called Music, Male Vocal, Female Vocal, Electric Guitar and Acoustic Guitar, but the app adds a further 12 options that include Bass Guitar and Keyboard. Using the app also enables the reverb type and settings to be adjusted, and gives you access to compressor, chorus and delay settings. For karaoke sessions, there's a 'centre cancel' function for attenuating vocals, the effectiveness of which depends on how the original track was mixed. An anti-feedback section is also included. User settings can be saved as Scenes for later recall.

The mixer, which has four channels in all, can accept mic‑ or line‑level sources (up to a maximum of two microphones), and also allows for music streaming to channels 3‑4 over Bluetooth or connection via a stereo mini-jack. These two channels may also be used as mono line inputs, accessed via separate quarter‑inch jacks. All the mixer connections and physical controls are on the rear panel, as are the DC input connector and power switch. To the right of these are the Master Volume control and the reverb Type/Level knob. A built-in limiter helps stop you overcooking things, and a red LED comes on when this is doing its thing. A Blutooth LED flashes when the channel 3-4 select button is used to initiate proceedings, then lights steadily once pairing is achieved — which turned out to be a fast and painless process. Feedback suppression is just on or off, and affects only channels 1 and 2, but seems to work pretty well, relying on auto-adjusting narrow notch filters that pick up on feedback squeal.

When the app isn't being used, three channel select buttons determine which channel will be controlled by the Volume and Voicing knobs. Each channel also has a clip LED to show if the input levels are being overdone. The centre cancel feature affects inputs 3-4 only, and is simply on or off. There's no phantom power for capacitor microphones, and no dedicated instrument input option, so a passive guitar would need to feed into the line input via a preamp or suitable pedal. 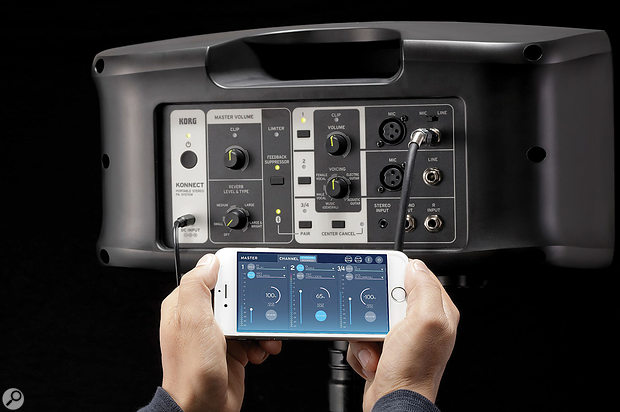 Though the Konnect does have some physical controls around the back, more options are available via the accompanying app.

After you've installed the free Konnect app, control from an iPad or phone is very straightforward, even in the so-called Advanced mode, and there's an in‑built soft manual if you need it. In Advanced mode, there are EQ cut/boost controls for the five fixed frequency ranges. The rotary controls operate in a different way from most audio plug-ins that we're familiar with, though; after you select a control by touching it, a slider bar appears and that's what is used to make the adjustment. Reverb is always available, in one of four flavours covering small to large spaces, and the effects section of each mic/line channel can be set to add additional compression, delay or chorus processing.

I found there was plenty of mic gain for sung vocals, but if somebody is doing a spoken-word presentation with their mic a few inches away from the lips, you might find that maxing out the channel and master gains is not quite enough unless they have a fairly sensitive mic. Tonally, the system sounds pretty clean until you push it too hard, after which the plastic cabinet imparts a somewhat boxy tonality. Music playback is well balanced with a solid enough bass end, but again, if you push the level too much, it starts to sound a bit stressed.

Overall the Korg Konnect does as claimed, producing a clean sound for both voice and music at low‑ish to moderate sound levels. For a gigging band it might come in useful as a mini monitor or as a stand-alone PA for front-room or small coffee-bar gigs, and it might also make a useful extra speaker for those pub gigs in L-shaped bars, where having a small speaker to push some sound around the corner can help. And when it's not doing any of that, you can use it as your home sound playback system or TV soundbar!

The most direct alternative is probably  the Mackie FreePlay.

A practical catch-all mini sound system in a single box.