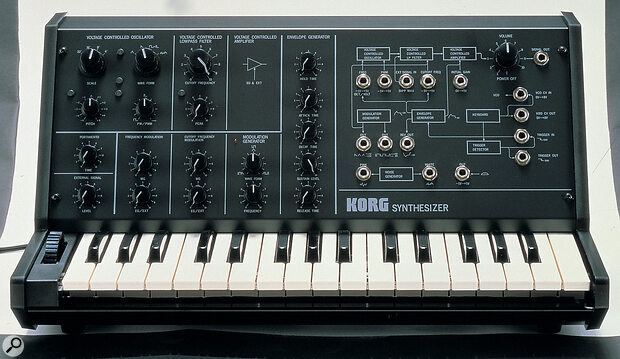 Even the mightiest keyboard players have to start somewhere — and quite a few started with Korg's diminutive MS10 patchable monosynth. Kingsley Sage shares his reminiscences.

Every reader of my generation — not the generation of Roger Daltrey and windmill guitar technique, more the generation of Jarvis Cocker — will remember the first time they actually owned a synth. For many of the 30‑something generation, the names of legend still conjure up a smile: the Roland SH09, Moog Rogue, the box of chocolates that was the EDP Wasp. And for those who admired the early work of OMD when they were still In The Dark, the name Korg stands tall. Ah, those dear memories of the chaps in their tanks tops, with the tune of 'Enola Gay' from their M500SP MicroPreset.

The first synth I owned, at the tender age of 12, was the Korg MS10. More impressive‑looking than the MicroPreset, it had a patchbay which meant you, too, could look as much like a freelance scientist as any member of Kraftwerk. And the MS10 could probably be bought from the same catalogue where Paul Humphries' mum got those tank tops...

The little brother of the MS20 was affordable in an age where parents would suffer heart failure at the price demanded of the early polysynths (£4,350 for a Yamaha CS70M, for instance). The features were typical of the smaller analogue monosynths of the time, but the MS10 is still worth a backwards look because of its sheer flexibility, which largely derived from the patchbay on its right‑hand side — a feature which still makes it a worthy contender for those wanting an analogue synth. So let's take a closer look at the machine, as the baffling 'Dr Korg' character first did in the original manual ...

The MS10 was a curious looker, with its two‑and‑a‑half octave keyboard and high, slanted back panel, containing 20 rotary controls on the left‑hand side and 16 quarter‑inch jack sockets on the right (plus the combined volume and on/off knob). There was also a control wheel on the left‑hand cheek, and later models had a push switch as well. The single oscillator was switchable over four footages (4' through to 32') with an octave range tuning pot giving the instrument a large range without resorting to external CV control. There were triangle, sawtooth, white noise and square/pulse waveforms on offer. The pulse width could be varied from 50/50 (pure square) continuously through to flat (ie. no sound at all). You weren't stuck with having white noise available solely from the oscillator, moreover, as there was a separate patchable noise source (more about that later).

More impressive than the MicroPreset, the MS10 had a patchbay which meant you, too, could look as much like a freelance scientist as any member of Kraftwerk.

The filter was a 12dB/octave affair with an incredible capacity for self‑oscillation. It's a strange‑sounding filter, more effective than those on the rather limp, non‑self‑oscillating Yamaha CS monosynths (they only had a Q of 10 and it showed), but not as warm and fat‑sounding as the fourth‑order 24dB/octave Moog filters. I still think of the MS10 filter as thinner‑sounding, but more suited to imitative synthesis than Moogs were. Moogs always sounded American, whereas Korgs had a more fragile, rather European tone.

Next up was a five‑part HADSR envelope generator (standing for Hold, which is used to provide a minimum key down time for each depression). The rise and fall profiles are entirely linear, so it's not a 'fast'‑sounding envelope like that of the Sequential Circuits Pro One. The Modulation Generator (posh name for an LFO) was impressive, featuring continuously variable waveshapes in either sawtooth to ramp via triangle form, or long‑pulse to short‑space step waveshapes via square waves, although there's no modulation delay, nor could the generator be routed through the pitch wheel. The rest of the front panel controls are taken up with the four modulation depth controllers (VCF cutoff, and VCO frequency each to the LFO, envelope generator or external patchbay source), the portamento and external signal input gain. The pulse width control can usefully be used to silence the VCO, if you just want to use the filter to process an external input.

The patchbay is where the most interesting functionality can be found. Available sources are the LFO (pulse and ramp waveforms) and a negative copy of the envelope control signal, plus a separate noise generator that features both white and pink noise outputs (pink noise has a reduced high‑frequency response, and sounds like heavy thunder). These can be patched to the VCO pulse width and frequency, VCF cutoff and VCA gain (for very 1950s‑sounding tremolo). The wheel provides a 5V source which can be used for pitch bends and similar (although I used it most to power hobbyist circuits on breadboards and to control the start and stop function on a home‑built DIN Sync 24 interface).

There are CV and gate in and outs, although they use the Hz/V and S‑trig standards, making them directly compatible with only a limited range of other synths, including the Yamaha CS range but not Roland synths, which used an Octave/V scheme. This is not much of a problem these days, however, since most 'modern' MIDI‑to‑CV converters feature a Hz/V option. If you don't want to fork out to interface an MS10 to something like an SH101, you can use the VCO patchbay frequency modulation input jack (which is calibrated in Octaves/V to give even‑tempered vibrato) and drive it from the CV out on, for example, a Roland. You can also connect a V‑trig output to an S‑trig one using a single transistor, or you can feed the output of the Korg into the external signal in of the driving synth and use the control wheel to permanently open the VCA gain. All part of the beauty of a patchbay really...

So, all in all, the MS10 is a small machine, but capable of much more subtlety than many of its rivals. Sure, the MS20 is a heap more fun, with two VCOs, a high‑pass filter, ring modulator and dedicated external signal processor — but they change hands for a lot more. The trick with a small machine like the MS10 is to experiment and use a few external effects. Richard Barbieri of the band Japan was once quoted as saying that the key to using analogue machines was to combine the best of their ability with external effects processing. I use my MS10 to generate new sounds for an Akai sampler, and the results can be surprising. You can always overcome the limitations of the single‑oscillator design of the MS10 by layering samples in a decent sampler.

Best of all, the MS10 is cheap. Costing £299 when first released in 1979, an example in good condition will set you back around £150, rather than the £400 typical for the MS20. Korg tell me that around 9000 units were produced, and the second‑hand market is fairly buoyant with good examples. A second‑hand MS10 is certainly a better prospect than a Yamaha CS5 because even though the latter has a multi‑mode filter, they didn't sound strong and were nowhere near as flexible. If you're looking for a heavy sound, however, you'd be better off with an SCI Pro One, Moog Rogue or Roland SH09 or SH101. But then you'd also pay more for those models.

So, if you're after flexibility on a budget, reach for your knitted tank tops and repeat after me "It's eight fifteen, and that's the time that it's always been..."

Let Me Introduce You To The Family

The MS10 was part of a range of similarly styled 'telephone exchange' units:

Favourite patches of mine include using noise to modulate VCO frequency (which sounds like the racket on the beginning of Depeche Mode's 'I Feel You') and using the VCO to produce white noise while feeding the pink noise via the external signal input to make excellent thunder and lightning storms.

Other bizarre effects include driving the VCF or VCO modulation inputs from an audible source for a near‑FM type effect and, incredibly (and I am not joking) connecting the two LFO outputs together to cause a hybrid waveform to appear through the front‑panel modulation control. More weird than that English bloke from Buffy The Vampire Slayer.