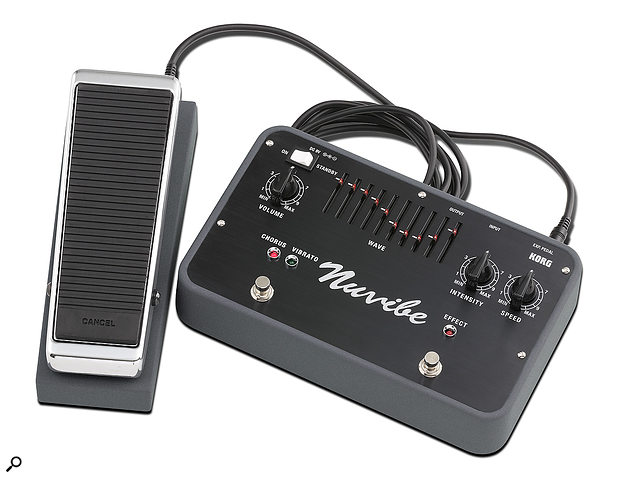 Is this the most faithful imitation yet of the fabled Uni-Vibe effect?

The Univox Uni-Vibe is one of those pedals that’s inextricably linked with Jimi Hendrix. Manufactured in Japan by the Shin-Ei company, it was introduced in the late ‘60s as a portable, transistorised Leslie rotating speaker simulator. Although unsuccessful in this role, Hendrix used his guitar, with liberal helpings of fuzz, wah and screaming Marshall stack, to unlock its psychedelic potential. Its use on tracks like ‘Machine Gun’ and during his Woodstock performance of ‘The Star Spangled Banner’ guaranteed the unit’s immortality.

Original examples are expensive, hard to find and come with several drawbacks: the inherent unreliability and inconsistency of the vintage components, the fact that, as the Uni-Vibe was designed for organ, the input is not optimised for guitar, and that there’s no on/off footswitch. Many manufacturers have taken a stab at recreating the magic of the original effect — a soupy, swirling mixture of chorus, phasing and tremolo. Notable efforts include the Roger Mayer Voodoo Vibe, the Sweet Sound Mojo Vibe and the Fulltone Deja Vibe, but none can claim to be definitive.

With this new pedal, the Nuvibe, Korg have gone right back to the source, hiring Fumio Mieda, the engineer who designed the original pedal, to oversee its creation. This was no small task. The original Uni-Vibe was essentially a four-stage phase shifter, with each delay stage set so as to boost or cut a set frequency notch, thereby creating the pseudo Leslie effect. At the very heart of the pedal, each stage was triggered by one of four light-dependant resistors arranged around a pulsing lamp. With LDRs (or, more specifically, the naughty cadmium sulfide they contain) proscribed by current legislation, Mieda and his team had to take the long way round, designing a new discrete circuit that uses 79 transistors.

Another thing that’s had to change is the name. Although Korg bought Univox’s parent company in the mid-‘80s, the Uni-Vibe brand name is, confusingly, currently owned by Jim Dunlop. While the string of Dunlop pedals bearing the Uni-Vibe name have generally taken a conventional stompbox format (the latest incarnation is a compact MXR pedal), Korg have gone for something much closer to the original in size — this is a big unit, with a big expression pedal to go with it. If your first thought is ‘Why can’t they make something small so I can fit it on my pedalboard?’, then you’re probably not going get what this effect is all about. It’s not just for show — there is a lot of circuitry inside — but part of the intended appeal is in recreating not just the sound of the original but the look and feel too.

That’s not to say that Korg haven’t included some eminently sensible updates. While the original could be temperamental when dealing with different power supplies, this pedal runs off a standard 9V DC mains adaptor or six AA batteries. The Nuvibe features new buffer circuitry, which is intended to ape the character of the original while offering the correct impedance to interface properly with other guitar gear. Footswitches for selecting chorus or vibrato modes and bypassing the effect (via a true bypass) are equally welcome. The expression pedal, which controls the speed of the effect, also turns off the effect when in the heel-down position. Like the original unit, chicken-head knobs are used to set the output level and the speed and intensity of the effect, while the white on/standby switch feels like more of a cosmetic addition than a strictly necessary feature. In all, it’s a good-looking, solidly made package, finished with a suitably retro and, no doubt, hard-wearing grey crackle finish.

The biggest departure, and one of the Nuvibe’s most intriguing features, is the slider array that lets you tinker with the effect’s LFO waveform. Marker points tell you where to position each slider to create the original unit’s waveform (a slightly lopsided sine wave that’s key to the Uni-Vibe’s low-end throb) but you can tinker to your heart’s content. Red LEDs on each slider pulse as the wave cycles, offering a helpful visual cue.

The Nuvibe certainly nails the characteristic sound of the original unit. It’s a primitive effect in many ways, predating the lush chorus and phase of the effects that came later, but that’s one of the pedal’s strengths — its watery wobble and churning throb can more easily be combined with distortion and other effects without turning into mush. With the LFO sliders set as the markers suggest, it’s classic Uni-Vibe all the way: anyone looking to recreate signature Hendrix or Dave Gilmour tones will find what they’re looking for.

Playing with the sliders opens up a range of different sounds, from the gentler modulation of a shallow ‘smile’ curve to choppy square-wave effects. You can introduce two sets of peaks and troughs to create some interesting multi-tap-type sounds or experiment with asymmetrical patterns to generate a rhythmic pulse. It’s all good fun and, though some settings can scoop out rather too much low end, the marvellously tactile slider interface makes it easy to keep tweaking until you get it right. Switching from chorus to vibrato mode offers a cleaner variety of pitch modulation, without the phase-shifting. At gentler settings, the Nuvibe is capable of some pleasing vintage-style vibrato, while more extreme settings offer a way-out seasick wobble.

The only complaint that might fairly be levelled at the Nuvibe relates to the range of the intensity knob. Below the 12 o’clock position on the dial, the effect is not really audible, and this means that the working range of this control is crammed into the last half of its rotation. It’s rarely a hindrance in practice, but a little more room to dial in precise settings would have been ideal. This very minor gripe aside, the Nuvibe is a really attractive package. Admittedly, it’s relatively expensive as single-purpose guitar effects pedals go, and this may limit its appeal to hardcore Uni-Vibe devotees. But that would be a shame, because this is a rare example of a pedal that offers both a reverent recreation of a classic effect and the ability to go beyond it with new and creative sounds of your own.

Designed by the man behind the original Uni-Vibe, this is a classy implementation of the classic effects but offers the user far more creative options than the original.