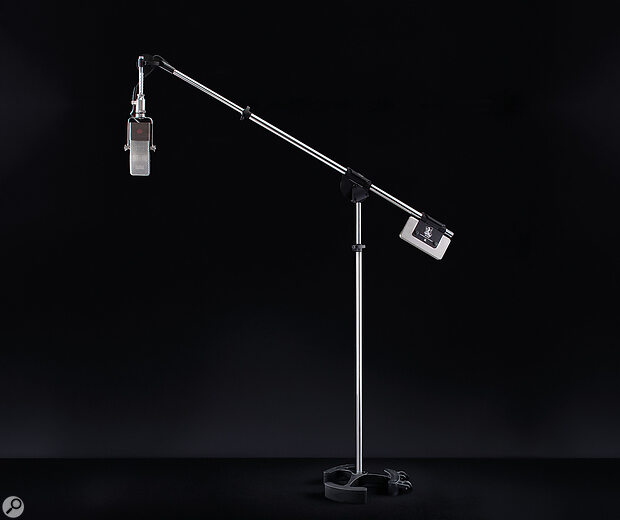 The counterweight and industrial-strength boom clamp make light work of even the heaviest mics and arrays, while the wheels mean that you don't have to support the full weight of the stand when moving it.

Exactly what sets a mic stand apart from the crowd?

Well-designed mic stands are expensive, but will give you decades of service. They're also the only thing that prevents both the embarrassing 'droopy-stand syndrome' and expensive mics from interfacing disastrously with the floor, so they're an essential investment. The ideal stand is very robust, easy to maintain, has sufficient reach to cope with all likely situations, and is able to support the heaviest of mics with ease and safety, without drooping. The last point requires a heavy boom counterweight, which 'standard' boom stands don't include.

One stand that ticks all the boxes is the Latch Lake MicKing. There are currently three models in the MicKing range: the single-extension 2200, the larger, dual-extension 3300 version, and a hybrid that combines the 2200's mast and boom with the 3300's heavier base-plate. This 'Big Foot' version is the most popular, apparently, and all are available with matt-black or chrome finish.

The MicKing design has several unique features, starting with the surprisingly compact but extremely heavy circular base-plate. The 2200's base weighs 12kg (28lbs) and is 14 inches in diameter, while the16-inch 3300 base weighs 13kg (29lbs). In both cases, 90 percent of the base-plate's mass is located at the circumference, to provide superb stability, and the spoked design allows stands to be 'nested' together for storage. Sturdy wheels fixed to the outside of one of the three weights allow the stand to be moved easily just by leaning it backwards. Another neat feature is that the mic cable can be looped under the spokes to lie flat on the floor and avoid becoming a trip hazard.

The one-inch, hollow steel mast is tapered to fit snugly into a chamfered receptacle in the base-plate, and is secured with a large nut. The 2200 has a single mast extension with a height range of 124-211 cm, while the 3300 model has two extensions to span 129-292 cm. The mast extension lock, the weak point of so many designs, is an ingenious 'Lever Lock' with a curved lever on an eccentric cam that tightens and releases a C-shaped collar around the top of the fixed column tube to clamp the inner extendable section. The design is simple but inherently secure, and no stage-hand gorilla can over-tighten or break anything! If necessary, the operating tension is adjustable with a knurled screw.

The clamps on the boom extensions work in the same way, with ranges of 1.22-3.15m for the 3300 and 1.16-2.39m for the 2200. Another thoughtful design feature is the integral v-shaped channel in each clamp mechanism, which grips the mic cable, providing a very effective cable tidy that's far easier to use than plastic clips or tape. 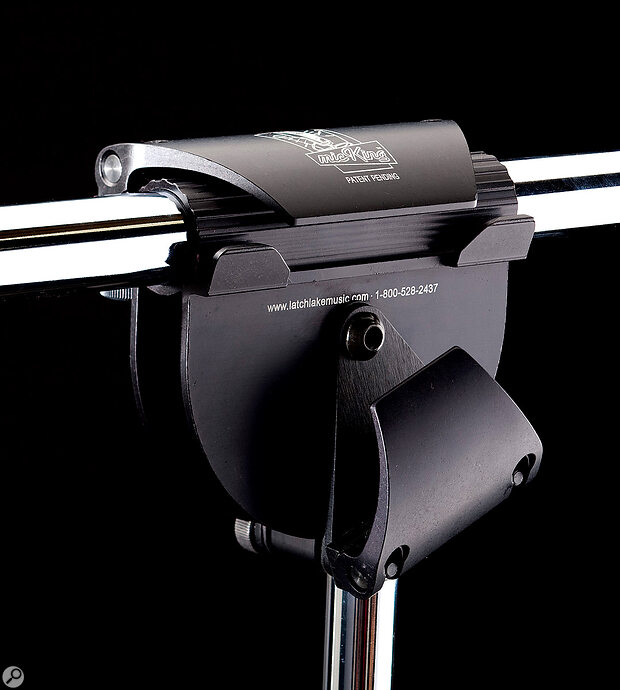 A very chunky 'boom clutch' sits at the top of the mast extension to control the boom arm's rotation through a 'double disc brake' arrangement, while a wide C-clamp across the top secures the boom arm's longitudinal position. The lever arms for these two clamps are wider than the tube clamps and have two adjustment screws to ensure uniform tension across the full width of the clamp. The 'disc brake' works by squeezing together two pairs of metal plates separated by large neoprene discs, and the resulting friction is immense. The range of boom rotation is deliberately asymmetrical, normally spanning -90 to +45 degrees, relative to the horizontal. This allows the boom to be folded down neatly for storage and permits sufficient microphone height for most applications. However, if the boom arm is installed in the opposite orientation, the articulation becomes +90 to -45 degrees which is useful for applications requiring the maximum possible height — such as when recording cathedral organs (the 3300 model can reach over 6m in this configuration).

A movable and removable 3.2kg (7lb) nickel-plated counterweight attached to the 'blunt' end of the boom arm is clamped with another lever lock. The weight is sufficient to counterbalance the largest and heaviest of microphones, minimising the rotational forces on the boom clutch and ensuring that the boom arm's centre of gravity remains directly over the vertical mast to maximise stability.

The business end of the boom is equipped with a 'Spin Grip Mount' — a 15cm (six inch) vertical 'hanger' to which the mic is attached. Another lever lock arrangement clamps a rotatable plate against a fixed plate via a neoprene disc. The plate is attached securely to the end of the boom arm, while the rotating plate supports the 'spin grip mount'. When unlocked, the 'hanger' is free to rotate for easy attachment of a microphone. The standard Spin Grip Mount terminates in the US standard 5/8-inch, 27tpi (threads per inch) thread, although a 5/8-inch to 3/8-inch adapter is included. If preferred, versions with 3/8-inch, European-standard threads can be supplied to special order at no extra cost.

An optional accessory is the 'Xtra Boom' arm which can be supplied in 12-, 18- or 24-inch lengths and has a standard 5/8-inch thread at one end. The arm extension and rotation is controlled with the same disc clamp arrangement used in the Spin Grip, and that clamp can be fixed to any stand or boom-arm tube with an adjustable open-collar clamp. The Spin Grip Mount is also available separately for fitting to the boom arms of existing stands (although it is quite heavy), or to the end of an Xtra Boom for even greater versatility.

The Big Foot review stand was supplied with a couple of Xtra Boom arms (see box) and Spin Grip attachments. Fitting the mast to the base was easy and reassuringly secure and, despite it being extremely heavy, moving the stand was impressively easy, as it has only to be tilted back about 30 degrees to engage the wheels. The Lever Locks worked brilliantly and the boom clutch was fantastically secure. I couldn't induce any 'droop' at all, even when swinging on the arm like a deranged rigger! I'm a big fan of vertical hangers like the Spin Grip, which I think make microphone placement considerably easier, and this particular design works extremely well.

I rigged a Soundfield mic, which is the heaviest I mic I have, and found that I could achieve an impressive horizontal reach with perfect balance, thanks to the heavy counterweight. Even when over-extended (ie. unbalanced towards the mic end) the rotary clutch was able to maintain the position easily, and the stand remained impressively stable, despite its small footprint. I also rigged a pseudo-Decca Tree arrangement with three Neumann KM184s, two on a pair of Xtra Booms attached to the main boom and angled to achieve the required mic spacing. This arrangement proved stable and took up far less floor space than the Manfrotto tripod stand I usually use. In fact, the larger 3300 MicKing model would be ideal for recordings in public venues because of its very compact footprint and considerable reach, both vertical and horizontal.

With a few Xtra Booms added, it would be quite practical to multi-mic a large drum kit using just two MicKing stands. For example, a pair of 2200 Big Foot stands will support the overheads in the normal way, while eight XtraBoom arms, some fitted with Spin Grips, can be attached to the stand masts to support tom, snare, hat and kick mics — Spin Grips being particularly useful for reaching into the kick and under the snare. The whole array takes up far less floor space than a conventional forest of mic stands, and is more stable, more convenient and faster to rig!

The MicKing stands impress in a way that few other stands ever have. They do everything they should, simply, reliably and safely, and if you are looking for a mic stand that can handle anything and will still be working perfectly in 30 years' time, you need look no further. Very highly recommended.

The most obvious and directly comparable alternative is the Starbird studio stand, but Manley Labs, who'd taken over its production, finally discontinued it after 70 years, when it became too expensive to manufacture. The Sontronics Matrix 10 (reviewed in SOS August 2010) is as strong and stable as the MicKing, but is only available with a chrome finish. The larger König & Meyer Overhead Mic Stands (models 20811 and 21411, with the 21231 boom) don't have wheels, but are very stable and have a proper counterweight system and a considerable reach.

A very well designed, easy to use, compact, yet remarkably stable, heavy-duty microphone stand. The mechanical engineering is impressive, and the stand will undoubtedly provide decades of reliable use, which goes a long way towards justifying the cost.