This innovative large-diaphragm mic offers more pad, pattern and filter options than you can shake a stick at — but how does it sound?

Austrian company Lewitt Audio was founded by Roman Perschon, who spent several years working as a project manager for a big European manufacturer before reaching the conclusion that large companies sometimes miss out by not pursuing interesting new ideas. We're told that Roman quit his job and went backpacking around the world, seeking out people able to develop and build his vision of what a high-end mic should be. That's how he met up with Ken Yang, owner of a large Asian mic-manufacturing company, who offered to work with Roman to share his knowledge and manufacturing expertise. 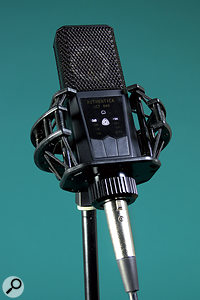 In 2009, their first prototypes were tested and refined, and by the end of that year, Lewitt Audio had products ready to sell. Their current range is impressive, given the short time the company has been in existence, and here we're looking at the LCT640, a large-diaphragm capacitor microphone. Designed in Austria, this mic is intended for recording various instruments, including vocals, drums, piano, wind instruments and classical ensembles.

The Joy Of Specs

At first glance, the reassuringly solid LCT640 looks a little like a ribbon mic — that is, until you peer through the grille and see the dual-diaphragm, one-inch capacitor capsule. The mic offers five polar patterns: omni, figure-of-eight and three widths of cardioid. It has a dynamic range of 145dB, with a creditably low self-noise specification of 10 to 13 dB EIN, depending on the pattern. Sensitivity is quoted as 13mV/Pa in cardioid mode, falling to 9mV/Pa in the figure-of-eight setting.

There are small frequency-response variations across the different polar patterns, specifically subtle changes in the shape of the presence bumps, which are reassuringly wide and gentle, and affect mainly frequencies above 5kHz. Other than that, the response is nominally flat from 20Hz to 20kHz, within around 3dB.

Transformerless circuitry is used, to avoid transformer coloration and to reduce the risk of electromagnetic interference. The output is on a three-pin XLR with gold-plated pins, and standard 48V phantom power is required for operation.

Whereas most mics with pad or filter options have just one of each, the LCT640 has three low-cut filter frequencies and a four-position pad switch. The latter introduces either 0dB, 6dB, 12dB or 18dB of pre-attenuation, while the low-cut filter can impose a 12dB/octave roll-off at 40Hz, or gentler 6dB/octave cuts at 150Hz or 300Hz.

If you're wondering how you can select all these different settings even though the mic is not bristling with switches, you use the backlit user interface on the front of the mic. This comprises three momentary-action buttons that are used to step through the available pad, polar-pattern and low-cut filter options. The currently selected value for each parameter is visible on the panel above the corresponding switches, and all the current settings can be locked by pressing and holding the pattern button for over two seconds. 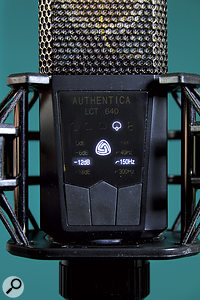 The various pad, filter and polar-pattern settings are accessed via this backlit menu system on the front of the mic.In addition to these features, the mic also offers automatic pad switching, and a clip 'history'. In the unlikely event that you overload the mic to the point where its internal electronics clip the signal, the attenuator automatically switches to the next highest value, and the previous (manually selected) attenuator setting will flash. Holding the high-pass button for two seconds or more clears the clip history, though it is remembered even if the mic is unplugged before being cleared.

The outer basket, which has hexagonal perforations, is made from steel, with a black ruthenium-galvanised finish. A secondary fine mesh is visible inside the basket. The mic comes with a bespoke LCT40 SHX shockmount cradle, an LCT40 WX foam windshield and a DTP 40LB leatherette storage bag, all packed in a rather elegant black aluminium flight case. A screw collar grips the mic in the shockmount, making it both easy and quick to fit and release.

On powering up the mic, the previously set pattern, pad and filter settings are visible on the control panel. As far as I can tell, the panel simply has the appropriate legend reverse-printed on it, so that activating an LED behind the legend causes it to show up on the otherwise black screen — simple, but very elegant. Pressing the buttons below the settings display steps through the options.

My first test was to record a male vocalist who came by to make a demo of one of his songs, and I was immediately impressed by the sound, which, to me, struck the right balance between smoothness and assertiveness; it sounded very polished right out of the box. Minimal EQ was needed to find the required tonality, and the sound remained pristine even after applying a fairly generous helping of compression.

Moving on to acoustic guitar, I was again impressed by the tonal balance, which was solid and warm but with the requisite amount of 'zing' and complexity at the high end. Hand percussion proved to be no problem whatsoever, and the mic even stood up extremely well when miking an electric guitar cab from around 750mm, slightly off axis, where it delivered plenty of bite and depth, but without fizz or grit. The tonal balance remains reasonably consistent across the various patterns, providing you don't get close enough to let the varying proximity effect cloud your judgement. I tried to activate the automatic attenuation but was unable to produce a sound loud enough, as the LCT640 can handle up to 145dB before you even start switching in the attenuators. You'd probably have to shoot it to activate this function!

My main comparison when reviewing this mic was an Audio Technica AT4050. Overall, the sensitivity of the two mics was comparable, with the LCT640 having a slightly brighter sound. Bright mics often sound gritty or harsh, but there was no impression of that here — the LCT640 has a great tonal balance and seems to deliver no matter what you point it at. Although it's not a budget mic, I was very impressed with both the sound and build quality of the LCT640, and it costs rather less than I thought it might.

The Audio Technica AT4050 and AKG C414 are two obvious alternatives, but there are so many multi-pattern mics in this price range that it would be impossible to list them all.

A very capable and versatile microphone with features not found on other models. It gives good results on vocals and pretty much any instrument likely to be found in a project studio.