You can forgive a funk band just about anything if they've got a shit-hot bass player, and in that respect Chris Pedley, bassist and co-founder of the Baker Brothers, is easily the biggest reason for spending money on this new downloadable loop library. Sporting a consistently warm and scuzzy funk-rock tone, his muscular musical inventiveness draws you into the groove and keeps you there, driving everything else before it. The guitars are pretty high-bar too, delivering some excellent rhythm licks with a selection of nice chunky tones. There's the odd technical issue (some uneven bass-note levels, for instance, and frequent phase-cancellation between the hard-panned guitar mics if you try to adjust their spread), but that's a paltry price to pay for the privilege of using performances like these. 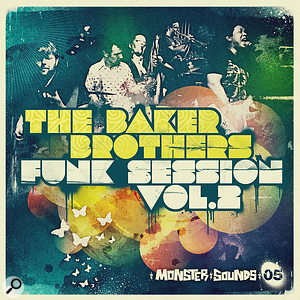 The horn parts are crisp and effective, with stylish rhythm-section arrangements broken down into separate loop layers, plus a reasonable rag bag of solos. While the tones are unblighted by the thin brashness of so many other 'bundled' funk horn loops I've heard, they nonetheless cut through a mix beautifully, which is no mean feat of engineering. The assertively breathy flute loops also come across well sonically but, given that you won't need all your fingers and toes to count them on, they do rather smack of 'just for the demos' window dressing. The same goes for the slightly more numerous (but rather pedestrian) Rhodes loops, which mainly seem to justify their existence via engagingly swirly modulation effects.

As for the drums, I'm in two minds. On the one hand, there's plenty of musical choice, with a good balance of straight and off-the-wall variations, and the tone has an appealing retro/lo-fi feel with tastefully earthy room ambience and lots of personality in the instrument sustains. But the playing seems a bit stuck in the mud from a musical perspective, despite unimpeachable rhythmic credentials. The kick tone may have something to answer for here, because its power base feels too low in the spectrum for me (it woofs more than punches) and, therefore, never really seems to propel the production along. I also felt puzzled by the balance of the kit on occasion, particularly where the ride and hat began overpowering the snare. The percussion's some consolation, though, featuring a few fantastically rusty-sounding tambourines and shakers.

Combining the loops was a bit of a lucky dip, as same-tempo loops aren't as tightly locked together rhythmically as you'd expect of, say, a traditional construction-kit library. Best to use these loops for adding funk flavour into existing sample-based arrangements, rather than for building complete funk backing tracks. The library's organisation isn't bad, with tempos, keys, and some sensible descriptions included in the loop filenames. There's a reasonable (if slightly patchy) assembly of one-shots too. All in all, I'd say 40 quid is reasonably good value, on the condition that you feel the demo's bass, guitar and horn parts are really grabbing you by the throat. Mike Senior