Mic stands are an essential bit of gear that few people spend enough time thinking about. Really well–engineered stands are frustratingly rare, though — we’ve all experienced the slowly drooping boom arm, or the wobbly topple, and often at the most inconvenient moment!

Back in August 2012 I got a bit over–excited about American mic–stand manufacturers Latch Lake, whose MicKing range of stands is superbly designed. The smallest was the single mast-extension 2200, and the largest a dual–extension 3300, but the most popular model was a hybrid combining the 2200’s mast and boom with the 3300’s heavier base–plate.

These are all, without a doubt, ‘properly engineered’ studio microphone stands with enormous reach (correctly counterbalanced) and height. The inevitable downside of this is that this level of engineering is expensive, as is the shipping of such heavy items. For the more modest requirements of many domestic project studios, for which the height and weight of those larger models isn’t really needed, Latch Lake have finally produced a smaller, more affordable version, the MicKing 1100.

Instead of the ingenious circular cast–iron wheeled base of the larger models, the 1100 has a folding tripod arrangement called a ‘Symmetric Torque Tripod’ (patent pending). It’s secured to the mast base by Latch Lake’s highly effective Lever Lock system, allowing the hub to be raised when the legs are folded down, minimising the packed–away length. In this condition, the stand is just under a metre long. The leg hinges are very robust and the legs are solid, not hollow, to add to the mass and keep the centre of gravity as low as possible. 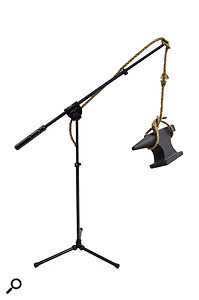 The dual–section telescopic mast allows a height range of 864 to 1613 mm, controlled with another Lever Lock mechanism. A two–section hollow boom-arm, with a range of 800 to 1486 mm, is supported at the top of the mast by Latch Lake’s superb clutch system, which will never droop! It’s also possible to install the boom arm into the tripod base, to use it as a simple vertical stand.

On unpacking the box, I was slightly disappointed to find that the useful Spin Grip Mic Mount supplied with the larger stands wasn’t included but, in fairness, this is intended as a lower-cost stand, and its height doesn’t warrant the use of a drop–arm attachment (although it can be purchased separately if required).

One big advantage of the larger stands is the inclusion of a movable and very substantial weight with which to counterbalance even the heaviest mics with the boom at full extension. I was initially a bit concerned to see a rather modest–looking counterbalance weight on the 1100’s boom arm, but closer inspection revealed that this is actually a 0.9kg weight, which is considerably heavier than most studio stands of a similar size. I then discovered a thread at the back which is for use with optional add–on weights. Latch Lake offer two more stacking weights at 0.45kg and 1.8kg, which can be screwed into the end of the arm — with 3.15kg of counterbalance available there’s no mic that can’t be mounted and balanced safely on this stand. The manufacturer’s full range of optional mini–boom arms and other mounts and accessories can also be used with the MicKing 1100.

So, all of the MicKing’s famed engineering prowess, lifelong reliability and robustness is here, but in a more compact format at a more project–studio–friendly size and price. Furthermore, the company offer a five–year warranty on the 1100, and if anything ever goes wrong it can usually be fixed very easily and often free of charge! What’s not to like? Hugh Robjohns