Though billed as a guitar–amp extension cabinet, this crafty speaker could come in handy in a huge range of situations.

Laney have become somewhat typecast as purveyors of heavy-metal guitar artillery, but in reality their products cover pretty much all the genres, and few cross more boundaries than the IRT–X, despite it being a part of the company’s Iron Heart range. Apparently the product’s main focus is as an active guitar–amp extension cabinet, but rather than simply take a line-level input from the amp’s preamp out or DI jack, it offers the option to sit between the speaker output and the speaker itself, so that it captures the complex interaction between the loudspeaker and the output stage without actually affecting it. Laney call this Electro/Mechanical Reactive Linking.

Unusually for a guitar speaker, the IRT–X houses a flat–response eight–inch woofer and a one–inch HF compression driver, both fed from a passive crossover and powered by a 200W RMS Class–D power amp. This makes the unit small (425 x 280 x 265 mm), light (11.5Kg) and easy to set up, while its MDF casework and tough textured paint finish mean it should be able to stand the knocks of live gigging. A pole-mount in one end allows for vertical use. When set for flat operation, the frequency response extends from 40Hz to 35kHz (–3dB), with a 40Hz 18dB/octave high–pass filter attenuating anything below that range.

An important part of the electric guitar’s character is attributable to the restricted bandwidth of a typical guitar–amp speaker, so to recreate that, the IRT–X includes switchable 1x12 or 4x12 speaker emulation. It also has an insert loop so that you can add your own effects to turn your existing guitar amp into a stereo rig — or use two spaced IRT–Xs to give you stereo effects, with the dry sound coming from your own amp in the centre.

The manual starts out by saying “It’s not a PA speaker! It’s a guitar 200W Xpansion cabinet,” but that isn’t really doing the product justice, as the IRT–X also has a conventional combi XLR/jack line input as well as basic treble and bass EQ, so with the voicing set to flat it actually makes a perfectly viable small PA speaker (or, thanks to its trapezoid cabinet shape, a floor monitor). In fact it turns out to be a really useful problem–solving speaker. What do I mean by that? Well, if you’re using one of those acoustic guitar combos that also doubles as a mini PA system, just add one or two IRT–Xs and you have enough coverage for larger venues. If you use a modelling guitar processor such as a POD, then the IRT–X is the perfect partner for that too. It is also very effective for creating guitar setups with stereo effects or for coaxing stage volumes out of small, low–powered valve combos.

All the connectors and controls, including the IEC mains inlet, power switch and voltage selector, are on a recessed panel, and one of the very few criticisms of the design is that the panel isn’t sufficiently recessed to fully protect the control knobs in transit. A hole cut above the control panel doubles as both carry handle and bass port, and for horizontal floor use, the cabinet is fitted with four chunky plastic feet. 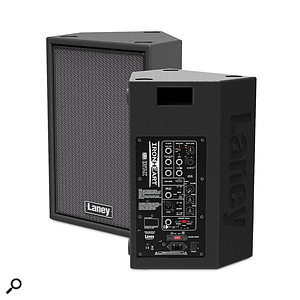 If using the line input, the combi connector has its own level control with adjacent clip LED, and runs alongside a mini–jack input allowing MP3 players and suchlike to be connected. If fed from the speaker output of a guitar amp, there’s a slide ‘sensitivity’ switch to select between amplifiers smaller or greater than 10 Watts in power. A speaker input is provided, as is a thru jack for onward connection to the speaker. The effects loop, also on jacks, has a mono send and a stereo pair of returns, because mode switching allows the speaker to be used on its own in mono or as one of a stereo pair. There’s a line output on a jack (switchable to send the mono signal or just the right channel for stereo use), a balanced DI output on XLR (switchable with or without cabinet emulation), a ground–lift switch, and even the option to turn off the internal speaker and to route the amplifier to an external speaker if required. This last feature could be handy if your main PA amp breaks down and you need to patch in the IRT–X’s power amp to get you out of trouble.

Master volume, bass/treble controls and a polarity invert button complete the layout. Having a polarity switch is a nice touch as it allows you to ensure the IRT–X isn’t out of phase with any amp you might be using it with.

Though not marketed as a PA speaker, I first tested a pair of the IRT–Xs in this role, just to see if they had what it takes to deliver enough clean level to get the vocals heard above a full band playing a typical pub gig. Despite their small size they actually did a great job, though in this scenario it would probably be safest not to entrust them with much more than vocals. Turn them to face you and they also make fine little monitors.

Used with a guitar amp, the speaker emulation needs to be turned on and you may also need a male-to-female jack extension cable, as many combos have a very short built–in cable connecting the speaker to the amp chassis. The fact that the IRT–X follows the actual signal feeding the speaker gives a much more natural sound than relying on a preamp feed, but the tone may be different from what you’re used to as there are only two generic cabinet emulations to choose from, and these may be different from the way your own combo or stack actually sounds. Having treble and bass EQ helps get you closer, and the sound is certainly very impressive when used to carry stereo effects, but it pays to be aware of this factor.

As an extension to a small acoustic guitar combo the result is more predictable, as the flat response means you hear something very close to how the original combo sounds. Having such a wide frequency response means that both vocals and acoustic guitar come across very cleanly. The same is true when using a modelling guitar preamp, as long as you use the cabinet emulation in the preamp itself and leave the IRT–X set to flat. You could of course choose to use the cabinet emulation in the IRT–X rather than in the preamp if you prefer the sound, but in most cases the emulations you get in a dedicated modelling preamp are more sophisticated. In this role a pair used to deliver a stereo sound is definitely the most impressive–sounding option.

With a typical street price under £300 each, the IRT–Xs are a very attractive proposition indeed, both as a dedicated guitar extension speaker and as a general–purpose, do–it–all powered extension PA/monitor speaker. The versatility of the design means that the same speaker can fill a number of different roles at different types of gig, depending on what’s needed. I think the designers really have to be complimented here for including such a full feature set, to the extent that most live performers could come up with a good reason to buy at least one!

The closest alternative probably comes from the Line 6 Stagesource range, though these don’t have the ability to accept a speaker-level input. They do however include speaker modelling, mixing and other DSP functions, albeit at a higher price.

A true all–rounder, whether for expanding your guitar rig, powering up a modelling preamp, setting up a small PA or monitoring system, or for simply adding an extension to your existing acoustic guitar amp.