Small mains/battery amps of the type that are popular with buskers and gigging musicians have become far more serious affairs over the past few years, and the Laney Audiohub AH4X4 takes things to a new level. Weighing a manageable 6.5kg and with its Class-D amplifier rated at 35 Watts (70 Watts peak), it looks like a mini line-array speaker (540 x 175 x 175 mm) and does indeed host a quartet of four-inch drivers, though the top end is handled by a more conventional soft-dome tweeter, giving an overall frequency response of 70Hz to 20kHz. There’s also an optional tough carry bag that’s well worth getting.

For use away from mains power it can run from three rechargeable NCR 18650 lithium-ion cells, eight AA alkaline batteries, or eight high-capacity AA rechargeable batteries (lithium-ion batteries deliver the longest play time). Interchangeable battery trays are provided for the two battery types; the lithium option is necessary for sustained high-power use and the manual suggests suitable makes of lithium battery that are known to be reliable. Note that neither type of battery is included and the supplied external PSU will not charge batteries, so if you need the rechargeable battery operation, you’ll need to buy suitable batteries plus a compatible charger. The mode selection LEDs on the rear panel double as a battery charge indicator.

Mechanically, the speaker seems very robust, combining plastic end caps with aluminium extrusions and a perforated metal speaker grille. A standard pole mount is built into the base. The rear-panel mixer controls are recessed out of harm’s way and the only design niggle I spotted was that the thumbscrews holding on the battery compartment cover aren’t captive so you have to be careful not to lose them.

The circuitry includes what Laney call Intelligent Power Management. In normal mode this power management system can extend battery life up to around 24 hours if using lithium-ion batteries. Where you don’t need lots of power, switching to the Eco mode will make sure you have maximum play time — and the level is still pretty generous. And for playing back music from your phone or backing tracks from your tablet, there’s Bluetooth streaming as well as a built-in audio mixer with jack, XLR and 3.5mm mini-jack inputs, up to a total of six inputs. A link connector is able to feed a second AH4X4 so as to double the number of mixer inputs and to widen the sound. There are also four preset EQ curves categorised as Flat, Bass, Loud and Vocal, and you even get digital effects in the form of delay and reverb. 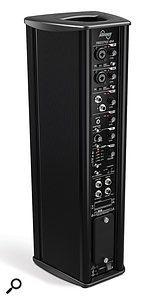 The integral mixer can accommodate up to six inputs, including two mic/line channels, and a stereo Bluetooth stream.The mixer section comprises two switchable mic/line channels with XLR/jack ‘combi’ inputs and gain controls plus individual buttons to add the effects. Channels 3/4 are jack, line-level inputs arranged as a stereo pair, while channels 5/6 can be fed via Bluetooth or via the 3.5mm mini-jack. All inputs have level controls and red Peak LEDs.

For the effects, one knob sweeps through the delay options to the left of centre with reverb to the right, while a separate control determines the level of effect added to whichever mic/line channels have their effect buttons pushed in. Below is the DSP EQ section where a button steps around the four voicing modes and a row of LEDs shows which mode is selected. There’s also a master volume control, an anti-feedback in/out button and a switch to select between the normal and Eco power modes. There’s no user-adjustable EQ other than selecting the presets, which set the global EQ for the speaker. That leaves the connector panel at the bottom where there’s a Link In connector, a Link Out, effects bypass footswitch jack (footswitch optional) and a low-pass-filtered sub output. The battery compartment occupies the lowest section of the rear panel and is opened via two thumb screws. A push-in connector for the external PSU is located directly beneath the battery compartment.

Sonically this little speaker turned out to be a real surprise, capable of SPLs of up to 117dB. Its vocal clarity is nothing short of superb — open and airy — and despite its modest power rating, you’re more likely to run into limits set by feedback than by available power, even with the anti-feedback system engaged. I preferred the flat setting for vocals over the designated vocal EQ preset but that may well vary depending on what microphones you use. Moreover, the delay and reverb effects are also really well chosen. You can’t use both at the same time but the range of each effect is exactly what is needed. The delay goes from a short slap-back with no feedback to a longish delay with feedback, while the reverb goes from short to long and has a nicely flattering character.

Another surprise came with the anti-feedback system. I was expecting some kind of perfunctory notch filter, but what you get is a proper ‘seek and destroy’ multiband, narrow-notch filter system than locks onto and then filters out the most annoying feedback frequencies as they occur, without significantly changing the sound. While such systems can’t perform miracles, they can get rid of that annoying near-feedback ringing and also claw back a few dB of level when you’re really up against it. Switching the anti-feedback off and back on again resets the filters.

Testing with an acoustic guitar revealed a potential problem that besets many devices that run from external PSUs and that don’t carry a ground conductor: my acoustic guitar, when plugged in, was accompanied by a fairly obtrusive hum, which went away as soon as I touched a grounded conductor to one of the metal jack surrounds on the AH4X4. Hum didn’t seem to be a problem when using a microphone though. If you’re away from hum sources and running from batteries, then guitar hum will probably not be an issue, but for mains-powered operation the unit may need to be earthed if you plan to use an acoustic guitar with a pickup. Fortunately you can go online and buy special grounding mains plugs that have a metal ground prong but where the other two pins are plastic. This can be hooked up via a length of flexible single-core cable to a suitable metal part on the speaker, or to the sleeve connection of a jack plug that can then be plugged into an unused socket on the speaker. Of course, using the AH4X4 as an extender to an amp or mixer that is already grounded also avoids the problem.

Turning to practicalities, the optional protective bag that was supplied along with the review speaker has storage compartments for the spare battery box and the PSU, while Velcro flaps front and rear allow for the speaker to be used while still in the bag.

On balance, the AH4X4 is a very impressive piece of kit, though I would have felt happier if the PSU had been able to charge lithium batteries as having to remove them to charge them is a bit of a drag, as is buying a separate charger. That niggle aside though, the Laney Audiohub AH4X4 is a great example of just how much performance can be squeezed out of a compact battery/mains speaker system — it may be all that’s needed to handle pub-level vocals/acoustic guitars for a solo artist or duo.

The obvious alternative would be one of the Roland Cube amps, but Mackie and Marshall also make similar portable systems.

It’s portable, powerful, sounds great, and can run on batteries — what more could a busker want?