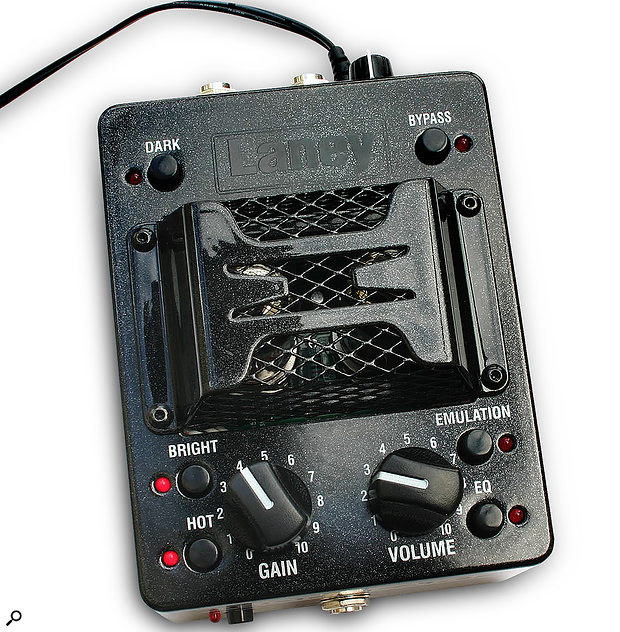 Laney’s versatile Ironheart amps are impressive, but can you really get the same sound from a stomp box?

Laney’s aim with the IRT Pulse is to capture the sound of their Ironheart-series amplifiers in a pedal-sized box. It has potential applications on stage, at home and in the studio, courtesy of its built-in USB audio interface and analogue speaker emulator. The Ironheart amps are best known for their raucous high-gain tones, but they also work well when backed off, for classic rock, blues or even ‘country clean’ sounds, so the promise of this all-valve preamp, built around a pair of ECC83/12AX7 valves, is intriguing. Despite the unit running from an included switched-mode power adaptor, the valves actually run at a ‘grown up’ HT voltage of around 300V, so we’re not looking at a low-voltage compromise. But is this small box capable of reproducing the same range of big-amp sounds?

Despite the stomp-box format, the unit is imposing, with its deep and chunky solid metal chassis, black finish and raised ventilation grille. Two knobs on the top adjust volume and gain, and interact with the Dark, Bright and EQ buttons to provide preset tone options. There’s also a bypass, which doesn’t affect the headphone output. The EQ button scoops the mids while boosting the lows and highs, for classic high-gain rock sounds, while Dark and Bright do much as their titles suggest. Hot brings in a significant boost that’s useful for solos, or for creating heavier rock sounds.

Located on the rear is a headphones mini-jack with level control, a TRS balanced output, a remote jack, a mini-jack stereo aux input, the power socket and the USB socket. The guitar input and Re-amp button are positioned on the front end of the case. Re-amp routes audio signals from the DAW back through the preamp via USB, so that any guitar parts that you previously recorded dry can be reprocessed as needed. I’m told that the cabinet emulation circuit is the one used in the original Ironheart amp, and is based on the sound of a 4x12 cabinet. This can be switched on or off as needed, via another top-panel button, though it’s worth noting that this is always active on the phones amp for the direct signal (but not for signals coming back from the computer).

To properly explore the possibilities of the IRT Pulse, it makes sense to look at its different applications. At its most basic, you can plug in a pair of headphones and use it as a practice amp, in which scenario the speaker emulation delivers something very close to a miked-up amp sound. If making noise isn’t such an issue, you can connect it to a powered speaker using the output jack. The Aux mini-jack allows you to play backing tracks from CDs or MP3 players — these sources are passed through cleanly and mixed with the processed guitar sound.

When connected to a computer using a USB cable, the IRT Pulse works with Windows or Mac OS as a two-channel interface. It shows up as a standard audio codec (my system info identifies it as a Burr Brown device — very reputable!) in your DAW. The first channel carries the clean guitar signal and the second the output of the preamp. If you have software speaker emulation that you prefer to use, the internal emulation can be switched off, and of course you can add effects such as reverb or delay in your DAW using plug-ins. 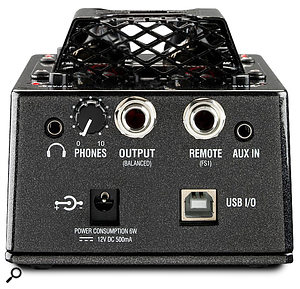 The USB connection allows you to record directly from the IRT Pulse, or to use it for re-amping.For re-amping, a clean guitar track from your DAW is sent via USB to the IRT Pulse, then the output returned via USB. So, depending on your DAW, it could be patched in as an ‘external insert’ or simply recorded to a new track. How you set up the monitoring depends on what other hardware you have connected and on your operating system, but while actually re-amping you obviously have to take care not to create a feedback loop. My preferred way of working was to turn the monitor level of the new track being recorded right down to zero and use headphones plugged into the IRT Pulse to monitor the proceedings. Users with a recent Mac OS can set up aggregate drivers that make the inputs and outputs of two or more devices available at the same time, but it’s simpler to use headphones plugged into the IRT Pulse when recording or re-amping, then switch back to your usual audio interface once you’re done.

For playing live, you could simply DI the IRT Pulse into a PA system or plug it into a guitar amp combo’s return jack to use instead of the amp’s own preamp. Alternatively, it can be used in front of an existing amp or you can patch it into the amp’s effects loop. An optional footswitch can be connected to the Remote jack for manually activating the bypass, so you can also use the IRT Pulse as a stomp-box overdrive. Even if you don’t feel that this is an application you’re likely to need, it is still worth keeping your IRT Pulse in your gig bag (a carry pouch is included) just in case one of the band’s amplifiers breaks down!

Powering up the IRT Pulse reveals two glowing valves, which are augmented by some red LED backlighting. All the button switches have red status LEDs. The three voicing switches are nicely judged and can be used in any combination, providing a wider-than-expected range of tonal options for both single-coil and humbucker pickups. With the Hot boost off, the tonality runs from classic clean to a moderate bluesy break-up as you advance the Gain control. The sound is extremely amp-like and suitably touch-responsive, and the speaker emulator does a very good job of recreating the sound of a stack as you might hear it miked up in the studio. The background noise level is surprisingly low and doesn’t become noticeable until you hit Hot and dial in some of the higher gain settings. 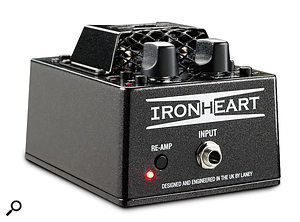 The Re-amp button selects your computer as the input source.When working with a DAW, a convolution-based cab emulator may give you more tonal options, and if you have anything suitable it’s worth trying. I tried using the IRT Pulse in conjunction with some of the cab and mic setups in Logic Pro X with the ‘Transparent Preamp’ selected in the amp column and found that I could get close to just about any guitar sound I needed. There’s no reverb or ambience, so the sound is a bit dry until you add some ‘fairy dust’ in your DAW, but that’s to be expected from any DI approach to recording electric guitar. To add that live sense of energy, you can also throw in a bit of compression, and of course you can use any of your other pedals in front of the IRT Pulse, just as you can with any amp.

The Hot switch brightens the sound slightly and adds a lot more overdrive, at which point the Gain pot takes us from gentle break-up at one extreme to pretty hard, metal-style rock at the other — though shredders may find they want to use a distortion pedal as well. There’s more to the sound then pure filth, though: you get a valve-amp responsiveness that so many emulations lack. Most classic rock tones inhabit the first half of the Gain control’s travel, but even at higher settings there’s good note definition. The USB side of things works fine: both recording and reamping work exactly as described, and the hardware Volume control makes it easy to fine-tune the recording level.

The IRT Pulse does a great job in all its intended areas, for less money than you might pay for a typical boutique overdrive pedal. You might be tempted to think of the Ironheart sound as Black Country heavy metal, but there’s more than that single string to Laney’s bow, and the same goes here: this little box can turn its hand to just about any style, and it makes a great safety net if you suffer an amp breakdown.

While there are numerous modelling and solid-state alternatives, including those offered by Line 6 and Kemper, this is the only high-voltage valve preamp I’ve tried to date that offers all these features.

This pedal offers Laney’s Ironheart valve sound in a compact and flexible format that’s well-suited to use on stage and in the studio. Given the size and cost of the IRT Pulse, it’s hard to find any real points of criticism.