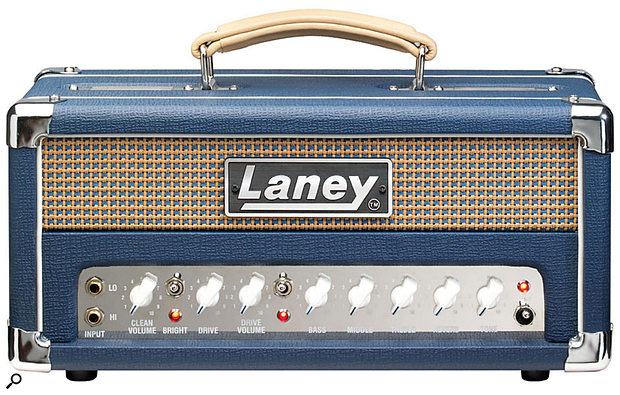 Designed primarily for studio home practise or even small gigs, the Laney L5 Studio Head is an extremely elegant amp — and if the head alone doesn’t meet your needs, a 1x12 combo is also available. The L5 has separate speaker jacks for 5 and 0.5 W power levels, a built-in USB audio interface and a dual-channel topography, in which the clean and drive channels share the same three-band (Bass, Middle and Treble ) EQ and reverb, plus overall tone control, which is used to tweak the amp to suit the room in which it’s being used. The clean channel includes a bright switch in addition to a volume control, while the drive channel has the expected drive and volume controls. An authentic-sounding modelled ‘spring’ reverb is also fitted.

The amp is a Class-A design, employing a single EL84 and three 12AX7/ECC83 preamp valves, the latter in screening cans. Built in the Far East, the standard of engineering and finish is nonetheless of a high standard, with gold-plated PCBs and jack sockets, plus sealed gold-contact relays for internal switching. A beautifully finished marine-ply cabinet with a leather strap and blue basket-weave vinyl covering completes the picture.

The rear panel includes a balanced XLR DI output that can be set to mic or line level, and has a ground-lift option set using DIP switches. Speaker emulation can be switched on or off, and there’s an effects loop (switchable 0 or -10 dB sensitivity) and a TRS footswitch jack that accepts the included dual footswitch for channel switching and turning the reverb on or off. 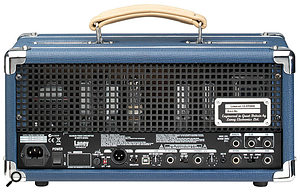 For the USB output, which can be used to record the dry guitar and amp sound at the same time onto two separate DAW tracks, there’s a level-adjustment control for the dry sound as well as a jack used as a re-amp send, enabling a dry sound to be recorded and later reprocessed via the amp. A ‘phones jack with a separate level control can be sourced from the USB return or from the amp, and there’s an auxiliary mini-jack input so you can play along to MP3s and suchlike.

The USB recording feature, which works with OS X or Windows and needs no separate drivers, allows both clean and amped sounds to be recorded simultaneously to give the option of re-amping the clean sound while monitoring using the ‘phones. While the emulation works perfectly well for DI’ing the amp sound, you can’t beat miking up a speaker, so it’s important when buying a head like this to try a few different speakers and see what works best for you.

By way of character, this amp doesn’t lean too far in any particular direction, though I’d say it sounds more British than American, with a gutsy mid-range when pushed. It has a classy reverb and circuit noise is kept to a minimum. Nuanced clean tones with just the right amount of jangle are available, but this amp also loves to rock, with plenty of touch-sensitive blues tones on offer. Indeed, I’ve seen boutique amps costing more than twice this price that don’t look or sound any better, so if you want a really sweet-sounding low-power valve head for the studio that won’t drain your wallet, look no further. Paul White