You’ve got to love a company like Poland’s Looptrotter. Their debut product, the aptly-named Monster (reviewed in SOS February 2012), introduced the company’s signature yellow and black livery, and combined compression with a tube–saturation processor. With the release of the Emperor two-channel analogue dynamics processor, the dynamic and harmonic processing that has become their trademark arrives with a much more wallet-friendly price tag.

The unit’s 1U front panel carries only three knobs and four illuminating switches per channel, plus a common Link switch, but the apparent simplicity cloaks a well thought-out user interface. Although the audio signal paths are purely analogue, the Emperor’s controls run in the digital domain and this digitally-controlled analogue paradigm gives you extremely accurate and thus recallable control over the Emperor’s processing.

There’s a distinct shortage of the usual accoutrements of a dynamics processor — there’s no input/output/gain reduction meter, and nothing marked threshold/attack/release. In fact, each channel has just one control knob marked ‘Drive’, one labelled ‘Dry’ and the other ‘Wet’. Two of the four push-switches take care of the Emperor’s separate side-chain bass-cut and treble-boost shelving filters, another switches between the Fast, Med(ium) and Slow attack speeds, and the fourth brings the entire channel out of hard bypass. Inputs and outputs are on rear-mounted balanced XLR and TRS connectors.

Although designer Andrzej Starzyk started out to build a limiter, his desire to deliver a creative tool led to the Emperor being developed so that, depending on both source and settings, it could act as a saturator, a compressor or as a limiter. As with other Looptrotter products, such as the Monster, Satur-8 and Sa2rate, its primary function is to add colour to a source, group or mix. The benefit of the control simplicity and lack of flashing meters is that you have to listen to what’s happening and not make judgements based on what you see, which inevitably influences what you hear. At the heart of each of the Emperor’s channels is a FET, which acts as a voltage-controlled attenuator that not only compresses or limits the signal, but also introduces a small amount of even-order harmonic distortion. 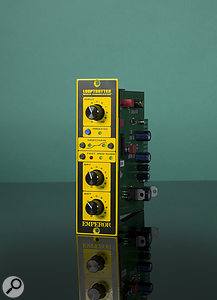 As well as the dual-channel rackmount version of the Emperor reviewed here, a single-channel 500-series module is available.The side-chain filters allow independent bass cut and treble boost without introducing phase shifts. Cutting the bass in the side-chain control signal enables the Emperor to process bass instruments without distorting or over-pumping, resulting in a more transparent and natural sound. Boosting the treble means that the Emperor responds like a de-esser or as a fast compressor for overly bright signals.

The unit’s fixed attack/release presets act slightly differently than their titles might suggest. The Fast setting transforms the Emperor into a limiter, in which configuration it’s more likely to add a healthy dose of saturation to the input signal. The Medium setting gives you a fast-acting compressor that catches transients with ease, and the Slow setting allows transients to pass unaffected.

Drive acts as the primary control for the saturation level and also, depending on other settings, of the amount of gain reduction: the higher the drive, the more compression takes place, the more that the signal is saturated and the more the perceived loudness of the signal increases. The overall balance between the level of Drive and the relative levels of the Wet and Dry controls is where you’ll find the sound you’re looking for. The only way to get there is by experimenting.

The line inputs and outputs are all presented on both TRS jacks and XLRs.The Emperor’s combination of compression and saturation can make a source sound subjectively much louder and more forward without any real increase in the actual signal level, and I found that it required little more than a few seconds of balancing Drive, Dry and Wet to come up with great results on drums, keyboards, electric and acoustic guitars, and vocals. What I found really intriguing is that, at high levels of saturation, it’s almost as though sounds seem to be being brought forward in the soundfield, on a ‘halo’ of what sounds almost like reverberation.

The Emperor is capable of producing stunning results. It isn’t going to be to everyone’s taste, but if you work in rock, pop, EDM — or if you just enjoy making huge sounds — then you’re going to love what it can bring to your music. Adding to its attraction, you can also get a single Emperor channel as a 500-series module for rather less money. Don’t just take my word for it, get down to your dealer and audition an Emperor as soon as you can — I have a feeling you’ll be glad that you did!

The closest comparison is possibly Looptrotter’s own flagship Monster compressor and distortion processor. Other than that you could look to the Empirical Labs Distressor, Overstayer Saturator and Evol Audio Fucifier for somewhat similar — but not the same — results.

The Looptrotter Emperor is a combination of compressor, limiter and harmonic generator that can raise the perceived loudness of a signal without increasing its level — and it’s brilliant!