This valve mic offers bags of character, and a quality of result comparable with mics that cost much more. 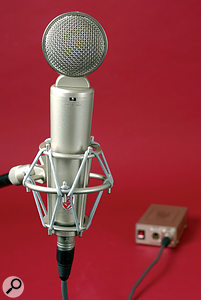 Lauten Audio are American 'boutique' manufacturers of high‑quality microphones that are not ultra‑neutral and 'forensic', but claim to be musically involving and creative, with an 'original' sound character.

The Horizon model we're looking at here is a tube (valve) microphone with its own power‑supply module and a fixed cardioid polar pattern. A miniature three‑position toggle switch at the top of the mic body provides pre‑attenuation of 0, ‑10 or ‑20 dB, enabling it to accommodate maximum sound pressure levels (for 0.5 percent distortion) of 120, 130, or 140 dB respectively. Although large‑diaphragm capsules are theoretically the quietest of mics, the valve impedance converter in the Horizon will inherently influence the self‑noise figure. In this case, the specs claim 20dBA, which isn't bad for a valve mic, but is still well above the noise floor of the best solid‑state equivalents (the Neumann TLM103, for example, has a figure of just 7dBA).

However, the Horizon's ace in the sleeve is its sensitivity, which is a remarkably robust 32mV/Pa (a good 6dB higher than most similar mics), so you won't need as much gain in your mic preamps, which might mitigate the self‑noise to some extent. The capsule itself is claimed to be 'hand tuned' and is supported in an internal shockmounting arrangement to minimise vibrational noise.

The mic has a very distinctive shape, with a large 'lollipop' capsule at the top, protected by a double‑layered metal grille, and a slim and slightly conical solid brass body extending below (with a unique serial number etched on the case). The overall length is 223mm, with a maximum width of 63mm, and it weighs a chunky 600 grams. The Horizon is a silver‑grey colour, with a slightly specular surface finish: its looks certainly live up to the price tag. It's shipped in a well-made aluminium flight-case, with a shaped foam interior which houses the power supply, shockmount and hard mount, power and mic cables, and the mic itself. The power‑supply brick is smaller than many, measuring roughly 88 x 45 x 146mm, and features a fused IEC mains inlet at one end, along with a protected voltage-selector switch. At the other end are the mains on‑off switch and two XLRs: a seven‑pin female that connects to the mic via the supplied seven‑metre Gotham cable, and a three‑pin male for onward connection to a preamp.

The supplied external cat's-cradle shockmount is effective and well designed, and it's a definite step up from the low‑cost norm. A 3/8‑inch thread adaptor is included, to convert the American 5/8‑inch mic-stand fitting for European stands — although it took me a while to find it, because it was pre‑installed in the additional 'hard mount' stand adaptor, which I'd ignored initially in favour of the cradle! The inclusion of the hard mount is useful, though, for those situations where the cradle is just too bulky.

Access to replace the Chinese Yaqin 6J1 sub-miniature pentode valve can be gained very easily by unscrewing a ring at the base of the mic and sliding the body off. The valve is claimed to be NOS (New Old Stock) military grade, and appears to be date‑stamped December 1982. A replacement currently costs about £25, so that wouldn't be particularly onerous to replace when the time came. The internal circuit board is well constructed, and the valve hangs upside down from its socket, with an anti‑microphony silicon O‑ring slipped onto its body. Selected high‑quality capacitors are evident in the output circuit feeding the custom‑wound transformer.

The supplied frequency‑response plot shows a remarkably well-controlled spectrum, apparently flat within half a decibel between 40Hz and 4kHz. There's a modest 1dB peak at 35Hz, before the bass end drops away gracefully, and a broad 2dB peaking plateau around 5-15kHz, adding airiness to the top end. The polar‑pattern plot is hilariously lacking any useful information at all, but in practice this mic performs as most other large‑diaphragm mics, with a progressive narrowing towards the HF end, and an opening out towards omni (more a soft figure of eight, really) at the bottom end.

Lauten recommend the Horizon for a wide variety of applications, including male and female vocals, voice‑overs, acoustic guitar, electric and bass guitar amps, drums (including overheads, snare, toms and kick), percussion, piano, brass and strings. A true all‑rounder, then!

The Horizon looks great and feels very solid, and consequently it can easily hold its head up alongside proven studio workhorses like the venerable Neumann U87. On first powering up, it takes a fair old time to reach its optimum working temperature and sound quality (I'd say between 15 and 30 minutes, in fact), but don't be tempted to rush it, because the character changes noticeably and for the better as it warms up. This is a loud mic (much louder than most valve mics), so relatively little gain is required when close miking. In fact, you may well find yourself using the ‑10 or even the ‑20dB pad settings frequently, simply to avoid overloading your preamp. On the whole, this is a good thing, and it certainly benefits the lower-quality preamps that are often included in budget computer interfaces, simply by minimising their noise contribution.

My initial impression of the Horizon was of a slightly bright but nicely crisp sound, with a well-extended bottom end and a very smooth, detailed mid-range. The proximity effect was not excessive, but could still be used for effect when required.

The Horizon definitely sounds far more expensive than it really is, with that typically rich, but still very musical character that most would associate with traditional quality valve mics like the AKG C12 or Telefunken 251 — and the fact that I'm even comparing the Horizon to mics of that calibre says a lot. In comparisons with familiar large‑diaphragm mics from Neumann, Audio-Technica and Microtech Gefell, the Horizon's airy top end was obvious, but I wouldn't say it ever detracted. It didn't seem to exaggerate sibilance in a bad way, for example, and I didn't find myself working to remove sibilance any more than usual. But it did endow vocals (both male and female) with an airy edge that seemed to help in busy mixes. Spoken voice was very nice indeed, with plenty of weight partnered with both clarity and detail.

However, when used to capture my daughter's cello practising (grade V exam coming up!), I found that it tended to exaggerate the mechanical bowing noises a little more than I'd have liked, and for that reason I'd be wary of using this on violins and violas too — at least as a close spot-mic — but then I've long been a fan of mellow ribbons in these applications (it's the BBC's brainwashing, I'm afraid!). When I placed the mic at a greater distance, as you would with a stereo pair, the airy balance proved far more appropriate and enjoyable.

It's also worth mentioning that, on the few occasions where the mic did seem overly bright, I found that simply tilting it back or forward a little, or even rotating it slightly off‑axis, was often enough to tame the excess without losing the character that's such an essential part of this mic's sound.

As a single overhead on a jazz-style drum kit, I found that it worked well again, providing a lovely clarity and sheen on the cymbals without letting them become aggressive. A quick test in front of the kick drum (something I never feel comfortable using an expensive condenser mic for) also delivered a great sound, with plenty of weight, but also a nice percussive edge — although it definitely needed the ‑20dB pad. On steel‑strung acoustic guitar it provided a full‑bodied sound, with plenty of strumming and picking clarity, and on an electric guitar amp it gave a nice, detailed sound that worked well in a mix. Better still, it mixed very comfortably when placed about three feet in front of the amp and blended with a Shure SM57 close to the speaker cone.

Overall, this is an impressive and versatile microphone, and one that I think truly represents good value for money — provided you're looking for a microphone with a definite sound character, rather than something that's fundamentally neutral. The generous output levels make life easy for budget computer interfaces, the two‑stage pads enable close miking of loud sources, the smooth, if airy, response seems to work well with most sources and certainly helps them to cut through a mix with minimal EQ, and the overall tonality is of a warm, harmonically rich (but not overdone) classic valve mic. The build quality is excellent too. Finally, the price has dropped even further since I wrote most of these words — and I already thought the Horizon was good value for money!

There isn't much in the way of lower-priced alternatives, other than the Rode NTK or the Avantone CV12, the latter being perhaps closest to the Horizon in terms of sound character. Most of the alternatives are significantly more expensive, including the likes of the Peluso P12, 2247 and 251. Solid‑state alternatives of similar quality would include the Neumann TLM103, the AKG C414 X‑ULS, and the Blue Baby Bottle.

A boutique valve mic from America with a fixed cardioid pattern and a very strong output level. A full-bodied, slightly rich but airy sound character is evident, but it works well on a wide variety of sources. Well built and good value.