Built-in DSP extends the flexibility and usefulness of these capable speakers. 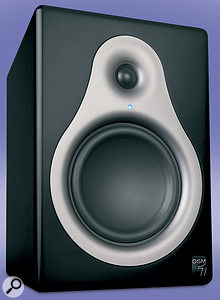 M‑Audio may be no newcomers to monitor manufacturing, but their DSM1 is slightly more upmarket than their earlier designs. There are some conceptual and physical similarities between the DSM1s and the EX66s that I reviewed a few years ago, so I suspect the design teams shared some members; M‑Audio's Avid stablemates Digidesign were also involved during the design stage.

Although they look like conventional two‑way active nearfield monitors, the DSM1s actually feature selectable analogue or digital inputs, and use on‑board digital signal processing rather than analogue circuitry to provide crossover, EQ and level trim functions, just like the EX66s.

Using DSP allows more switchable options to be included without having to increase the number of components (especially when it comes to EQ and filtering) and it also makes it possible to build in subtle EQ curves to counter anomalies in the driver and cabinet responses. Some speaker designers, though, are philosophically opposed to trying to 'EQ away' problems, as they feel it introduces other equally unwelcome side-effects, often relating to phase.

As you'd expect, the HF and LF drivers are independently driven by two separate power amplifiers (LF 100W, HF 80W) but they're based on the Class-D technology that's more often associated with high‑efficiency, large‑scale PA amplifiers. The woofer's 6.5‑inch black anodised aluminium cone is a seamless, concave dome, suspended in a roll‑surround fixed to a steel frame. The tweeter comprises a one‑inch, soft‑dome, soft fabric Teteron driver with a Neodymium magnet and built‑in heat sink, and operates up to 27kHz.

The analogue inputs are presented as balanced XLR or quarter‑inch TRS jack connectors, and these are summed, so that both can be connected, and even fed, at the same time. Because the crossover is based on a DSP, the analogue signal is internally converted to digital data for processing. The digital inputs (AES-EBU and S/PDIF connectors, with a further S/PDIF Thru for linking) automatically slave to the sample rate of the input and can operate at up to 192kHz/24‑bit. Unlike the analogue inputs, only one digital input can be fed at a time.

The enclosure is a simple black‑painted, rear‑ported box, but its reinforced MDF structure makes it very rigid, and the corners are nicely rounded to reduce diffraction and to improve the cosmetics. Waveguides are moulded into the driver surrounds to control dispersion, and there's a blue LED to let you know the speakers are powered up. Other than that, the front panel is very streamlined and simple — which is more than can be said of the busy rear panel, where all the connectors and switch options reside. The cabinet size is a compact 12.8 x 9 x 10.3 inches (325.5 x 228.7 x 261.5mm), and the weight per speaker is 16.5lbs (7.5 kg).

Internally, the signal path uses a 36‑bit digital signal processor, which, in addition to hosting the fourth-order crossover, includes six 'Placement Setting' filters to compensate for the speaker's position, either within the room or relative to the surface of a desk or console. A volume trim control adjusts the level of the input signal in the digital domain over the range ‑22dB to +10dB, and the analogue input can be set to a sensitivity of +4dBu or ‑10dBV. Where the digital input is used, one speaker links to the next using a coaxial cable, and a switch on the back of each speaker determines whether it receives the left or right channel signal.

All this adds up to a compact monitor that's capable of covering the frequency range 42Hz-27kHz, with a maximum SPL of 110dB at one metre. The crossover operates at 2.7kHz with a steep 24dB/octave filter slope, and the overall response of the speakers can be adjusted in the digital domain using 12 DIP slide-switches on the rear panel, the settings for which are clearly silk‑screened to save you hunting for the manual. The HF shelf can be set to +1.5, ‑1.5 or ‑3.0 dB, the mid EQ to +1.5, ‑1.5 or ‑3.0dB, and the high‑pass filter to 40, 60, 80 or 100Hz, with a 12dB/octave slope. There are two further 'Desktop' EQ settings, intended to compensate for reflections from the console surface, offering a cut of 1 or 2dB at 220 or 175Hz.

This is the first time that I've tried a monitor with built‑in equalisation dedicated to tackling desk reflections, but it's well known that early reflections from a mixer or other flat surface can introduce humps into the lower mid-range, so having the opportunity to smooth them out to some extent is very welcome. The correct setting has to be chosen by ear because there's no reliable way to predict at what frequency the problem will occur, or how much cut will be needed to neutralise it. In any event, the nature of desk reflections is that comb filtering results from the combined direct and reflected sound, so there may be dips as well as bumps to iron out. Compensating for the worst of the bumps is about the best you can hope to achieve with a system like this one, but it can bring about a worthwhile improvement in lower‑mid clarity.

The published spec quotes a signal‑to‑noise ratio for the electronics of 102dB A‑weighted, for a sample rate of 96kHz with the analogue input in use. 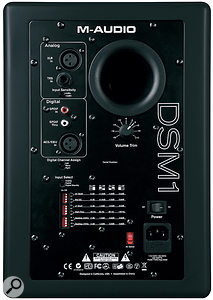 The rear of the DSM1s hosts several different input options, as well as a level control and DIP switches to control placement‑correction EQ.

Although each speaker comes with four resilient isolation feet, I chose to test them on top of the Primacoustic Recoil Stabiliser mounts that I normally use under my own monitors. With all the settings left flat, the sound turned out to be generally smooth and sensibly neutral, without the hyped bass or fizzy top end some monitors serve up in a bid to impress.

The more different material I tried, the more impressed I was with the performance of these little speakers. They can handle electronic dance music, delivering a robust and credible low end with plenty of punch for their size, but they can also interpret the subtle nuances of acoustic music without relying on excessive presence to create the impression of detail.

Being critical, the DSM1s do have a very slightly 'reedy' quality to the upper register that pushes the sound forward a little, but it is quite subtle and many users will appreciate the hint of 'presence' that results.

While not serious, I also noticed an audible, low‑level hiss when listening close‑up to the tweeters, and it didn't change with the input‑gain trim setting. It also seemed to be independent of the choice of analogue or digital inputs, and I recall the M‑Audio EX66 speakers having similar traits. My guess is that this is related to the digital circuitry and processing.

The stereo imaging was good, and in a world where over‑tuned low end and aggressive treble is often passed off as 'professional' performance, M‑Audio have come up with something laudably neutral‑sounding that lets you hear more of the music and less of the speakers.

If the design team is the same one as created the M‑Audio EX66s, then the sonic result they've achieved is really quite different, especially at the high end, where the use of a soft‑dome tweeter rather than a metal diaphragm produces a significantly smoother sound. I liked the EX66s for their almost forensic ability to look into the fine detail of a mix, but the trade‑off there was that they had a 'more of everything' character about them. By contrast, the DSM1s sound much more 'European' in terms of neutrality, and they may suit the type of person who aspires to something like Klein + Hummel or PMC monitors, but who needs something more affordable. As ever, more money will buy you more quality, but these monitors are well up to the job. Other than the low‑level hiss I mentioned earlier, the DSM1s handle the job of nearfield monitoring in an elegant fashion without being confined to working only with a narrow spectrum of musical genres.

Based on price alone, the DSM1 competes with the likes of Mackie's HRM824 MkII model, Adam's A7, the Genelec 2030 and Dynaudio BM12A. However, all these have their own tonal characteristics so careful listening is advised.

A very competent nearfield monitor that strives to deliver and honest impression of the music being played.