The Floor Q Optical Compressor is a traditional JoeMeek compressor in pedal format, for use with guitars, basses and other instruments. The company came up with the idea after looking at how their studio products were being used. To match guitars and basses fitted with passive pickups, the Floor Q includes a high‑impedance JFET instrument preamplifier input stage, with its own input level control. Up to 20dB of gain is available, allowing the pedal to be used to overdrive amplifiers. 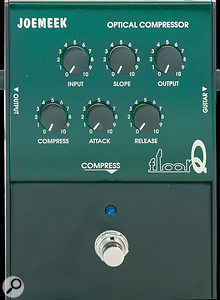 Power comes in on a coaxial connector from the 12V AC power supply, but the internal circuitry of the Floor Q has been designed to work with most pedalboard power supplies, of either polarity, from 9‑18V, AC or DC. A bright‑blue LED shows that the effect is active.

Six rotary knobs are used to adjust the compressor parameters, and everything is housed in a tough, steel box, with the usual unbalanced input and output jacks. The chunky on/bypass switch is situated well away from the knobs.

The optical gain‑control circuit has a soft‑knee characteristic and its response curve is far less linear than that of a theoretically perfect compressor, which is why the design has such a distinctive tonal character. However, the very 'relaxed' way in which this design works means that some control adjustments are less obvious in their effect than on a typical studio compressor. The compressor knob sets the threshold, but as the compressor has a soft knee, this really equates to more or less compression at the ratio you set using the Slope control. This isn't called 'ratio', because in a soft‑knee design like this one, the ratio gets higher the harder you drive the compressor, so it depends both on level and the Slope setting. In general, the higher the Slope setting, the more assertive the compression, and at very high settings the response is similar to that of a limiter when the input level is high.

The attack and release controls work pretty much as you'd expect. The release time is variable from 100ms to three seconds, but setting the knobs halfway usually gives a pretty musical result. There's no metering to show how much gain reduction is taking place, so you have to set everything by ear. The input gain control (up to 20dB) sets the gain regardless of whether the compressor is in or out of the circuit, and the output control (which also offers up to 20dB of gain and is only active when the compressor is on) can be used to adjust the level of the effect when you hit the pedal. It's also used to compensate for any level reduction caused by the compression process itself. If you don't want the amp sound to be modified when the compressor's bypassed, set the input knob for unity gain, but if the ideal of pushing the amp front‑end a bit harder appeals, you have plenty of gain in hand to do just that.

On guitar, the pedal can add lots of clean sustain, which makes it possible to play blues solos or ringy country chords using a much cleaner amp setting, and anyone after the Mark Knopfler/Dire Straits guitar sound will also find this pedal very useful. I have to admit that the effect of the attack and release controls is more subtle than I'd anticipated, but when you're using a clean amp setting it's easy to hear when you've got it right. Attack settings of between two and five seem about right in most instances. With Slope set near to maximum, the sound gets a bit 'squashy' (as you'd expect), but at more moderate settings it really lets the guitar ring without choking the life out of it.

Switching to bass guitar reveals a lot of possibilities, ranging from gently thickening the sound to assertive, limiting 'slap and pull' excesses. Moderate levels of compression, with both attack and release set to around four, add a sense of loudness and power to the sound while evening out the playing dynamics. I was pleasantly surprised by the low noise of this pedal, which bears out its specified ‑94dBu noise spec, and the circuitry also has 19.5dB of headroom before clipping — so you can really drive your amp without compromising the signal quality.

Overall, then, the JoeMeek Floor Q does a great job at a surprisingly affordable price (£199.99$199). It can be powered from most PSUs, and it's easily tough enough to survive life on the road. And while there are compressors out there with more impressive technical specifications, you'd be hard pushed to find one that sounds more musical, which is what really matters. Paul White

A practical and affordable pedal adaptation of the JoeMeek optical compressor for the guitar and bass player.