JoeMeek's GBQ pedal combines distortion with their three-band sweep Meequalizer EQ, and runs from an included external power supply — though any PSU that fits the socket, and can deliver between 9 and 18V DC or AC at 270mA or greater, will work. The device has a 6MΩ guitar input, and outputs are on jack and balanced XLR. There's also a ground-lift switch, a quarter-inch headphone outlet, and a pair of send/return jacks for connecting additional processors. 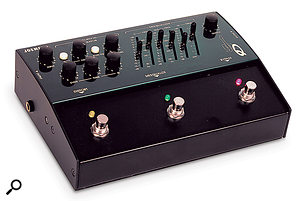 Three footswitches are used to activate distortion, EQ and the master hard-bypass. With the unit not bypassed but the Distortion and EQ circuits switched off, the input and output level controls still work, and can provide up to 20dB of clean gain. Unusually, the distortion section provides separate control over odd- and even-harmonic distortion generation. The Odd section produces a familiar sustaining overdrive, and the Even more of an enhancer-type effect, for which the tune and bandwidth controls determine what frequencies are enhanced. A novel feature of the Odd overdrive section is the rotary Structure switch, which uses the principle of phase cancellation to create a whole range of overdrive colours, from warm and fat, through scooped, to edge and bite. There's also a switch for soft or hard clipping, and an overdrive pre- or post- EQ switch. The Even harmonic section has Tune and Q controls, and six sliders control the EQ section, which is set up as three sweep 'bell' filters, with preset bandwidths. The filter range is 40Hz to 350Hz, 150Hz to 2.5kHz and 500Hz to 7kHz. Up to 15dB of cut or boost is available per band.

When I tried the pedal out, the odd-harmonic drive section offered a range of tonalities that worked well on chords, retaining a sense of the individual notes while adding sustain and colour. Adjusting the Structure control changed the tonality dramatically, adding some seriously scooped timbres, although to my ears the sound lay somewhere between traditional overdrive and fuzz. The results on overdriven solo lines are more subjective: this box rewarded digging in and delivered a punchy, confident sound, but didn't feel as fluid as something like a Tube Screamer, or as natural as the FullTone OCD. The clean-boost option pushed a decent tube amp into overdrive easily, and the three-band EQ offered a lot of flexibility to both overdrive or clean tones: it sounds quite different when used before the overdrive section rather than after it. The choice of all bell curves (as opposed to high- and low-shelving) meant that I didn't get excessive boost at the very low end or the very high end, unless I deliberately sought to do so. The even-harmonic section worked best when used sparingly on acoustic guitar or bass, but sounded somewhat 'fizzy' if used as part of a distorted guitar sound, but treat it as a harmonic exciter and you won't go wrong.

The JoeMeek GBQ offers a variety of useful sounds that sit well in a mix, though you might need to patch it through a guitar amp or amp simulator to get the right tonality when using the distortion section. I wouldn't advocate ditching your favourite overdrive box, but the GBQ can create a usefully wide range of distortion tones, as well as providing EQ and clean boost when required — more like a good 'Swiss Army Knife' type of gain/distortion/enhancer/EQ, for use with acoustic, electric and bass instruments, than the 'ultimate guitar overdrive'.Paul White