The Joemeek product range has recently been completely overhauled, and one of the updated units is this new half-rack recording channel. Have the designers kept what made the original products successful?

The Joemeek Three Q is the first product to bear the Joemeek name since the company was acquired by the American PMI Group, and the circuitry has undergone a complete redesign. Although the new owners are American, this redevelopment has been overseen in the UK by Malcolm Toft, who was instrumental in the design of the original Trident consoles.

Built into a half-rack 1U metal case and powered from an included adaptor, the Joemeek Three Q combines a mic/line preamp with an optical compressor and a simple but musical equaliser. Everything about the Three Q is different from the old Joemeek range, other than the fact that the front panel is green, and even that is now a stylish extruded metal component with a curved front, embellished with small, tasteful knobs and pale-yellow legending. A new preamplifier based around the same low-noise chip used in many high-end preamps now feeds the optical compressor section, and this too has been revised to provide a greater dynamic range and to avoid saturation in the side-chain. Directly following the compressor is a three-band equaliser with a swept mid-frequency control, and the EQ circuitry is now based on the classic Wien Bridge topography (a variation on which was used in the old Trident consoles) to provide more of a vintage British sound.

On the rear panel is a switch to activate the 48V phantom-power source (though there's no front-panel status LED) and, as expected, the mic input is on a balanced XLR connector. A quarter-inch balanced jack takes care of the line input, and a front-panel button with status LEDs selects which is active. An insert point (unbalanced on a TRS jack) comes between the mic preamp and the compressor, and there's also a balanced mix input that allows an external line-level signal to be added into the Three Q's output stage prior to the Output Gain control. That leaves dual outputs on balanced quarter-inch jacks with a +4dBu/-10dBV level selector switch. The reason there are two outputs is that one is available to be used as a direct monitoring source in computer recording systems that exhibit excessive latency. Here the circuitry is designed to give the same level into balanced and unbalanced loads provided that unbalanced loads are connected using a single-pole (unbalanced) jack.

Controlled by a single knob with a gain range of 10-60dB, the mic preamp has no pad or low-cut filter, though it can stand up to +19.5dBu without clipping, so a pad is very unlikely to be needed. On a number of preamps I've reviewed recently, a lot of gain has been crammed into the last few degrees of the control, but here a specially designed pot has been used to make the control of gain much more even. As line signals are generally much greater in level than mic signals, the gain range is from +35dB to -15dB when the line input is selected. In terms of noise, the official spec for the EIN is -128dB, which compares well with other high-quality mic preamps. A warning LED comes on 6dB below clipping. As with most good mic preamps, the frequency response extends well beyond the range of human hearing (10Hz-70kHz, -3dB), but not so far as to run into unnecessary radio-frequency interference problems. Signals below the compressor threshold have a distortion figure better than 0.001 percent, but above that some intentional compressor distortion is part of the character of the unit.

There are just three compressor controls: Compress, Attack, and Release. The ratio is fixed at a nominal 5:1 and, in common with other optical compressors, the threshold tends to be progressive, giving it a soft-knee characteristic. In essence, the ratio automatically rises from very low to its full 5:1 value as the signal level approaches the threshold. When higher levels are presented, the ratio eventually falls again, which is another characteristic of optical compressors that contributes to their 'dynamic' sound. Compress essentially sets the level of signal relative to the threshold, where clockwise equals more compression. No calibrations are provided for the Attack and Release controls as, in this design, the actual attack and release values vary depending on the nature of the incoming programme material. A simple four-LED meter monitors the amount of gain reduction being applied, up to a maximum of 16dB, and a button bypasses the compressor when not needed. Both the compressor and EQ bypass buttons have status LEDs.

That leaves the EQ section, which comprises three 'bell curve' equalisers rather than using peaking filters for only the mid-range. The mid-band covers 300Hz-5kHz, while the low and high sections are centred at 80Hz and 12kHz. All have a ±15dB gain range. I prefer my mid-band to go lower by around an octave where possible, but this range seems to be a good compromise for a three-band EQ. Like the compressor, the EQ can be bypassed, after which the overall output level can be controlled from 'off' to +14dB of gain, the actual level being monitored by a nine-section LED meter reading up to +12dB. With a low 75Ω output impedance, the unit can drive almost any load, even over long cables. 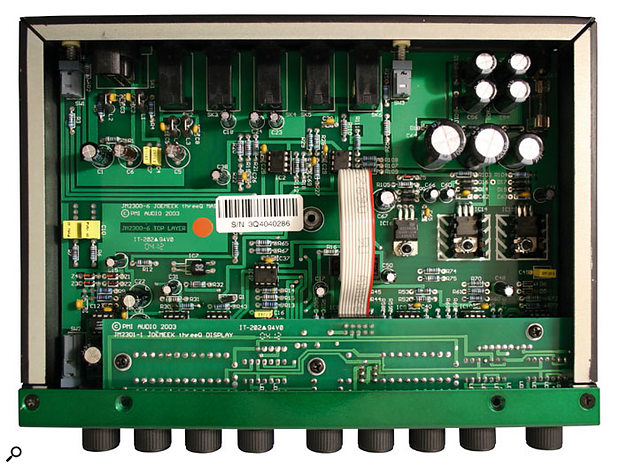 My first impression when trying the Three Q was that the mic preamp was very clean and uncoloured for a product in its price range, but what I really wanted to find out was whether the compressor redesign had lost the character of the original. I needn't have worried, though, because although the compressor behaviour now seems a little better controlled it is still possible to go from mild gain-control compression to quite aggressive compression that's meant to be heard. The heavier compression works well on things like rock vocals and bass guitar, but it can be made to work on most sources, including acoustic guitar and drums.

One of the interesting things about 'lamp and photocell' compressors is that their gain-reduction characteristics are quite nonlinear, and once the signal has risen to a certain level the compression ratio falls back, increasing again once the level gets even higher. This kink in the compression curve helps the compressor impose a character without killing the transients in the signal.

I found the equaliser more musically useful than Joemeek's previous fixed-frequency four-band design, and I prefer the sound of 'bell curve' high and low equalisers in most situations, as they let you boost more of the frequencies that need boosting, while affecting everything else to a lesser degree. The only frustration for me was the lower limit of the mid-range equaliser, as I find the ability to apply EQ cut down as low as 150Hz to be quite useful. Overall, though, I liked the sound of the EQ.

The compromises inherent in this design are of course the availability of a single swept mid-range EQ band, the fixed compression ratio, and less comprehensive metering than you might expect from a top-shelf processor. Nevertheless, given the low UK price of the Three Q, it performs extremely well, combining the essential character of the original Joemeek compressor with a more transparent mic preamp and a more useful equaliser. It also looks a lot smarter.

Optical compressors are designed to be heard unless used very sparingly, so they may not be the best choice if you need heavy compression with minimal side effects. Clearly the Three Q is a 'character' compressor, where the sound being processed is audibly thickened, and you can coax it, if you choose, into gain pumping to give an aggressive rock or hip-hop sound. In other words it is as much a creative tool as a means of regulating level. There's also a lot more to this unit than a colourful compressor, as it includes a very respectable mic preamp and a nice sounding EQ that has more than a hint of vintage feel to it. If the Three Q points the way for how the rest of the range will be presented, the Joemeek name can look forward to an interesting future.

This re-launched Joemeek processor has been updated and improved in many areas without compromising the original opto-compressor sound.