The Joemeek range of outboard equipment, manufactured by Ted Fletcher in Devon, has developed a large user base thanks to characteristic easy‑to‑use interfaces, good performance, and attractive pricing. The latest module to be added to the range is the TwinQ — a dual‑channel voice processor with comprehensive facilities and the trademark Joemeek sound.

The TwinQ provides a useful set of tools for the money. Each channel is equipped with a versatile input amplifier, stereo‑linkable opto‑compressor, and three‑band 'Meequaliser'. The whole caboodle is housed in a slimline (120mm front‑to‑back) 2U rackmounting box sporting the familiar green front panel and clear black labelling. Almost all the buttons have associated LEDs to indicate current settings, and two large VU meters waggle enthusiastically to show either signal level or gain reduction.

The opto‑compressor offers a vintage sound with full parameter control, though the main Compression knob has rather an unusual control law.

The rear panel is well equipped, each channel boasting an XLR for the microphone input and quarter‑inch TRS socket for a balanced line input. Two more sockets offer balanced line outputs, and a third provides an unbalanced insert point, operating at a nominal ‑10dBu. The balanced line inputs and output can be used unbalanced without any problems. The IEC mains inlet incorporates a fuse holder and an adjacent rocker switch to power the box (shame this is on the back...). A small removable blank panel allows an optional VC1QD dual‑channel A‑D converter to be installed — see the 'Optional VC1QD' box for more detail.

The front panel is straightforward enough and all the controls are protected by handles at each side. The two largest knobs are the Input Gain and Output Gain controls, with four smaller knobs for the opto‑compressor, three more for the Meequaliser, and seven red buttons. A pair of high‑impedance (1MΩ) Instrument inputs are also provided.

The input amplifier is a current‑sensing design, as opposed to the more usual configuration which provides pure voltage amplification. This unusual approach is claimed to provide better fidelity by making the mic amp insensitive to long cables or those with high capacitance. I tried it briefly with two entire cable drums of mic cable (about 180 metres) and could detect no audible difference from a single 5m length, so it seems to work!

The Input Gain control is marked from 10 to 65, although the actual gain range changes for each of the three inputs. With a line input selected, the control spans ‑10 to +15dB, but covers +15 to a massive +80dB with the mic input, catering for just about any mic, including ribbons. The situation is more complex with the front‑panel Instrument input (which overrides the mic and line inputs when plugged in) as the gain changes depending on whether mic or line mode is selected. The nominal range is +10 to +45dB, however. With all three inputs, the overload margins are phenomenal (more than 30dB in normal operation), and both noise and distortion specifications are very good too.

Input conditioning is provided by a series of buttons. The first selects the rear‑panel balanced and floating line input instead of the mic input. Further buttons select 48V phantom power, phase reverse (affecting all inputs), and high‑pass filtering. The last facility is very useful, since the TwinQ has a bandwidth extending well below 10Hz — this reflects Fletcher's policy of minimising phase shifts in the audio path to maintain a 'big' and full‑bodied sound. The filter may be needed to remove subsonic rubbish in some circumstances, but the TwinQ sounds best with the filters switched out. The filter turns over at 50Hz and falls off at 12dB/octave. While I'm talking about frequency responses, the upper frequency extreme for the line inputs remains flat to over 20kHz within 0.5dB, whereas the microphone input falls very gently from about 15kHz. 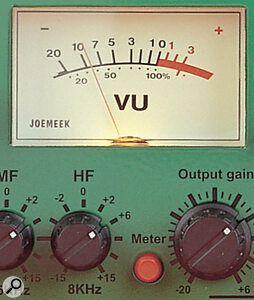 You can meter output level or gain reduction, but the lack of a status LED by the selector switch makes it difficult to tell which you're seeing.

The compressor is a more sophisticated version of that first seen in the VC1Q, and is activated by a button with associated blue LED. This opto‑compressor employs a simple photo‑resistive element and its gain reduction is adjusted through three continuously variable controls and one rotary switch. The Compression control effectively sets the threshold and Slope determines one of five ratio settings. These controls are interactive to a degree, and the whole process is also related to the nature and level of programme. The Slope control is simply marked one to five, but provides ratios from 1.5:1 up to 15:1, all with soft‑knee curves departing relatively gradually from linearity to compression. It is this aspect which allows the TwinQ to provide smooth dynamic control without anything sounding overly compressed, even at fairly high settings.

Both attack and release times are fully adjustable with the Attack control variable between 0.5 and 10mS, and the Release control spanning a nominal range of 0.25 to 2.5S — although the timing is also programme dependent. In general, Attack and Release settings around the middle of their ranges provide the most subtle results, but the compressor can be persuaded to overshoot, especially with percussive tracks, so that it overreacts to transients and provides a useful punchy effect. This is achieved by setting the attack time to minimum.

The controls all work pretty much as would be expected, although I found the Compression control had a strange law, where everything seemed to happen over the first three‑quarters of rotation and nothing much thereafter. As with most compressors, for a given threshold/ratio setting the compressed signal can be made to sound louder by increasing the Attack time or reducing the Release time. At the opposite extremes — with the fastest attack and slowest release times — the TwinQ provided an obviously dull sound, which is quite typical despite the handbook's claims that the "compressor adds punch and bite without the dull muddiness of all others".

Of course, it's all a matter of degree... I would agree, though, that this optical compressor design does exhibit a clarity in normal use which is matched by few budget VCA designs. There is more than a hint of a vintage sound here too, which is wonderfully complementary to pretty much all musical instruments, and makes finding the most appropriate settings highly intuitive.

The illuminated VU meter can be switched to show either the internal signal level prior to the output level control, or the amount of gain reduction. However, one of the few negative aspects of the TwinQ is that there is no LED associated with this button. Unlike a bar‑graph meter where the direction of the bar (left‑right or right‑left) indicates its function, the VU meter thrashes about so wildly all the time that you really have to engage the brain to interpret its display. I often found I had to deselect the input and watch which way the needle recovered to see whether it was showing output level or gain reduction!

Pressing the Link button between the two control sections links the action of the TwinQ's two channels in order to maintain a stable stereo image. This causes a yellow LED to illuminate next to the button, while the blue LED associated with the second channel's compressor is extinguished — I can see the logic, but found it rather disconcerting! In fact, the second channel's compressor doesn't even have to be switched on, because selecting the stereo link activates it anyway. In link mode, only the first channel's controls affect the dynamics action, although the setting of the second channel's Slope switch affects its gain reduction display, and should therefore be matched to the setting of the first channel if the two meters are to track accurately. The Link switch does not gang the operation of any other controls, so input and output gains and equaliser controls all need to be set individually.

Immediately following the compressor section, the Meequaliser is a fixed, three‑band EQ similar to that in the original VC5. It provides shelf responses for the top and bottom bands (nominally operating at 100Hz and 8kHz) with a mid‑frequency control centred on 1.5kHz, having a broad Q factor of 1.1. All three bands are provided with ±15dB cut/boost ranges, and an EQ bypass button allows the effectiveness of your EQ settings to be assessed easily.

This equaliser is intended for broad creative tonal shaping and sounds smooth and musical. The mid‑range is ideally placed for little cuts and to emphasise detail in the all‑important presence region, while the high‑frequency shelf is useful for adding a little air or sparkle. I found the LF control had to be used with more care, as even small boosts could quickly create a muddy sound.

The final circuit element is the output amplifier, which doubles as the make‑up gain for the compressor. The TwinQ has a substantial output drive capability of +24dBu from a 150Ω source, the actual level being set by an Output control. Fully anticlockwise, the output is turned off completely, while at the opposite extreme there is about 6dB of additional gain above unity (marked at the two o'clock position). The VU meter does not reflect the actual output level, but rather the internal level prior to this control. If installed, the optional A‑D converter takes its feed from the normal output, after the level control. However, there is no way to monitor the digital conversion level on the TwinQ — that will have to be assessed externally.

I found the TwinQ a lovely box to use on the whole. Sure, the metering caused some confusion and the Compression knob could have been scaled better, but these minor complaints did not affect my ability to use it effectively — and it is a very effective box. The quality of the mic amp is good, if not class leading, and certainly versatile, with plenty of gain and the ability to handle 'difficult' mics and long cables with ease.

The Meequaliser is fine as far as it goes, but the opto‑compressor is what this box is all about. It sounds great with pretty much everything in much the same way as the classic vintage opto‑compressors, but at a fraction of the price. This isn't technically perfect, but rather musically creative and complementary — both virtues worth owning. Like most of the Joemeek products, the TwinQ does a great job at an affordable UK price and must be short‑listed if you are looking for a flexible recording channel. 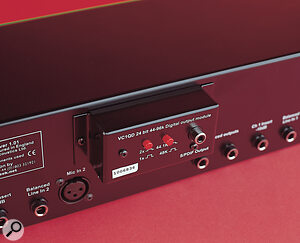 This optional module provides the TwinQ (and other Joemeek products) with a single stereo S/PDIF digital output. The module is easily installed in the rear of the unit by removing a blanking plate and connecting a supplied ribbon cable between the main board and the digital module. Two buttons on the module select the sampling rate (44.1 or 48kHz), and doubled sample rates (88.2 and 96kHz). Quantising is performed to 24‑bit resolution and the A‑D converter is apparently calibrated so that 0dB on the VU meter corresponds to ‑12dBFS with the Output Gain control at its unity setting. The output is provided via a single phono socket only — no optical or AES‑EBU output.

A versatile dual recording channel with a flexible input stage handling mic, line and instrument sources with equal aplomb. A simple but musical three‑band equaliser stage is accompanied by an opto‑compressor which provides creative dynamic control without drawing attention to itself, even when worked fairly hard. An optional A‑D converter module completes the impressive facilities.