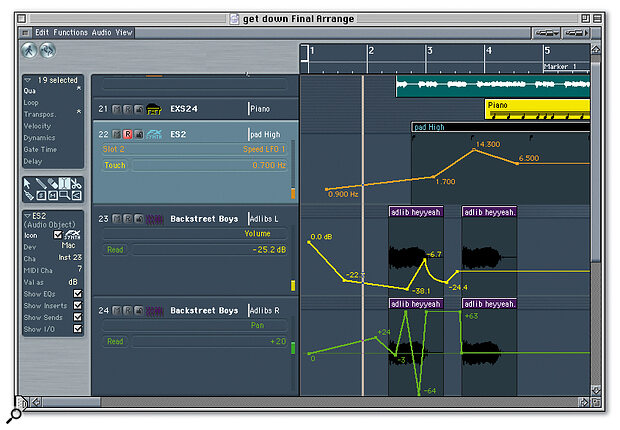 An exclusive first look at Emagic's new Logic Control hardware control surface, and the eagerly awaited Version 5 of Logic — a powerful combination that takes the system to a new level of functionality.

The question most manufacturers must be asking themselves is "What can we possibly offer users when software already offers so much?". In the case of Emagic, the answer is hardware control and, if all goes to plan, the first Logic Control units will be available on 7th January 2002. However, to explain Logic Control first requires an overview of Logic Audio version 5, as the program includes a major overhaul to the automation system that makes operation with Logic Control possible. Fortunately, Emagic invited me to visit their Hamburg development facility for a couple of days, where I was able to go through the new features of Logic Audio v5 and Logic Control in detail, with the designers on hand to answer my questions. 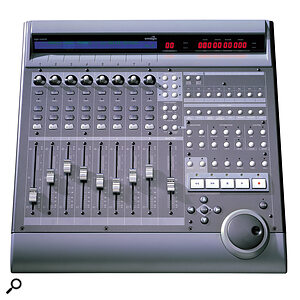 In version 5, the fader automation and Hyper Draw functions have been integrated into a new track‑based automation system that works in a very similar way to a hardware moving‑fader mixing console. Automation data is no longer tied to individual regions, and where regions are copied you can decide whether or not the automation data should be copied too. Automation data is now stored in dedicated folders and new view options enable graphical automation data to be seen superimposed, so that several functions may be observed at once (level, pan, sends and so on) — alternatively, these may be displayed one beneath the other. Graphical automation now includes curves as well as straight lines, and there are numerical values for each point. Each track has modes for Read, Write, Latch and Touch with Trim/Update to be introduced as soon as possible after the initial release of version 5. Touch puts the automation into Write mode whenever a fader is selected (or a physical Logic Control fader is touched) and drops out of Write mode when the fader is released. Latch does much the same, except that the automation values don't jump directly to the previously stored value at the end of recording, but instead follow a smooth curve, the duration of which can be set by the user. Because the automation is now truly track based, you no longer need to set up the Channel Splitter objects in the Environment to record automation data. A further benefit of this redesign is that plug‑in controllers are no longer remapped to avoid conflict with the Logic automation system, which simplifies the external control of VST plug‑ins.

Logic Audio v5 will be a chargeable update, with many other features in addition to the automation that make it very desirable, not least the inclusion of 11 new processing plug‑ins and three virtual instruments (for bass, pad and polysynth sounds). The plug‑ins include several novel distortion devices, a de‑esser, an exciter and an adaptive limiter, plus the multi‑band compressor and the denoiser from Waveburner Pro.

Audio professionals will be pleased to note that Logic Audio 5 will include OMF support for audio file transfer between OMF‑compatible applications, such as Pro Tools. EXS24 users will find that they can now import REX files directly, as well as make use of virtual memory to increase the available sample capacity. A number of scoring improvements have also been implemented, including the ability to colour notes by pitch or velocity. Logic Audio 5 also includes the POWR dithering system which has received acclaim from many high‑profile audio professionals. This enables audio files of up to 32‑bit resolution to be reduced to 16‑bit while preserving as much as possible of the original dynamic range and without adding a significant degree of noise. 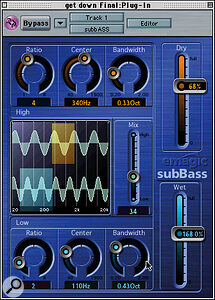 Logic Control has been developed in conjunction with Mackie, with Mackie manufacturing the hardware and Emagic handling the unit's software. Although it looks like a digital mixer, Logic Control is purely a control surface so it's independent of your audio hardware and has no effect upon sound quality. Connection is via a single in/out pair of MIDI ports, and eight‑channel expander units are available that also require one pair of MIDI ports each to function. The way Logic Control works is quite similar to a keyboard in Local Off mode: control data generated by the physical controls is sent to Logic, which in turn generates data to update the displays. Any changes made within Logic are reflected in Logic Control and vice versa.

Although Logic Control provides just eight sets of channel controls plus a master fader (all with P&G motorised 100mm faders), bank switching allows these controls to access up to 128 audio and/or MIDI tracks, and there's the option to have the controls address all the available tracks or only used tracks (which corresponds to the adaptive Track Mixer layout). The fader resolution is 1024 steps and conductive fader caps let the system know when a fader is being touched. A full‑width display at the top of the unit tracks the status of the controls, automatically importing track names and numbers from Logic, and there's also a two‑digit numerical readout for displaying channel assignments, as well as a large SMPTE or bars/beats read‑out.

In addition to the fader, each channel has an assignable rotary encoder, plus dedicated switches for Solo, Mute, Select and Record. Assignment buttons select the functions of the encoders, and these can include parameters such as Pan, Sends, Surround, plug‑in Edit and EQ, while bank and channel shift buttons enable the channel functions to be moved in banks of eight or by one channel at a time. There's also a mode that enables the encoders to function as a virtual channel strip for a single sequencer track. A further 16 assignable buttons can be set up by the user to call up screen sets or any other function that can be accessed via key commands, and above the full‑size transport controls are buttons relating directly to the automation modes, plus buttons that duplicate the modifier keys on the computer keyboard.

A set of display Zoom buttons is located to the left of the weighted jog/scrub wheel, and to make sure everyone can use this facility, the audio scrubbing within Logic is now independent of the audio hardware with which it is used. Using the wheel, it's possible to mark or trim any part of a track as well as using it for finding precise edit locations.

Logic Control is recognised by Logic Audio when it is connected, though if one or more expander units are used, a Sound Diver‑style window enables the user to configure how these should relate to each other. For example, an expander unit can form an extension to the main unit, either on the left or right, or it may be configured to work independently, enabling, for example, the main unit to be used for mixing and the expansion unit to be used for plug‑in control. What impressed me during my short time with the unit was how unambiguous these controls were and how straightforward Logic Control was to use. The whole feel of the program is transformed, giving more the impression of working on a hardware‑based DAW than on a software sequencer. Best of all is that when something is actually easier to do using a mouse/keyboard combination, you can still do that, because Logic Control is immediately 'aware' of what you've done. 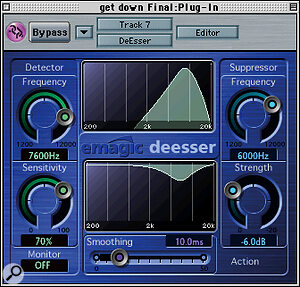 Logic Audio v5 is more than just another update, and together with Logic Control it takes the program to a new level of professionalism. Though I shall have to reserve detailed judgement until we get the release system for review, my limited experience with Logic Control suggests that it is extremely well thought out and it feels like a professional piece of kit. I was also extremely impressed at how receptive the designers were to feedback from end users.

There really are no grounds for complaint about the cost of the upgrade when you consider that some companies are charging more just for a bundle of plug‑ins that offer significantly less than Logic's new suite of plug‑ins. I for one can't wait to get my hands on Logic Audio v5 and Logic Control. 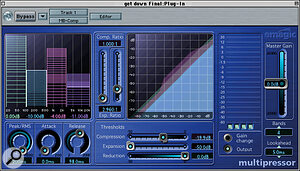 In tandem with the launch of Logic Audio v5, Emagic are also introducing two new separate virtual instrument plug‑ins, the first of which is EVOC20. This is actually a suite of three devices, each based around a 20‑band filter bank. The first is essentially a vocoder, where a monophonic oscillator tracks the pitch of the input signal and is fed to one of the vocoder inputs to produce an electronic singing or robotic voice effect. The filter banks may be spread or shifted in frequency to maximise on weirdness!

The second instrument includes a MIDI polysynth section, enabling it to act more like a conventional vocoder, and it includes voiced/unvoiced detection along with a few neat tricks to increase intelligibility. Again the filter bank can be spread or shifted, and both units allow the user to select just a part of the input spectrum for analysis. The third function is more of an effect than an instrument, and is based around a user‑adjustable filter bank with the ability to morph between two filter settings as well as to adjust the resonance of each filter band.

The other major new plug‑in is the ES2 polysynth, which follows a three‑oscillator, two‑filter topography and has the ability to combine elements of analogue, FM and wavetable synthesis to produce a huge array of sounds. The oscillators include all the standard analogue waveforms (plus noise) as well as a large selection of 'digiwaves'. Analogue‑style phase sync has been modelled very convincingly and there's a control to 'sneak' a sine wave past the filter section, specifically to create deep bass sounds when lots of resonance is being used. The ES2 includes dynamic vector control and various tempo‑related functions for rhythmic effects, while the two filters may be used in series or parallel.

A comprehensive but easily accessed modulation system gives the instrument much of the power of a large modular system and there are also on‑board effects. Innovative features include constant‑beat oscillator detune and a variable‑percentage randomise function for modifying existing patches within controlled limits. More than 400 presets ship with the ES2 and checking them out convinced me that it was my kind of instrument. It is quite intuitive to use, but can produce some wonderful evolving textural sounds as well as some really fat analogue emulations. 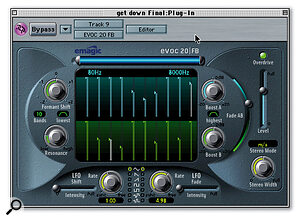