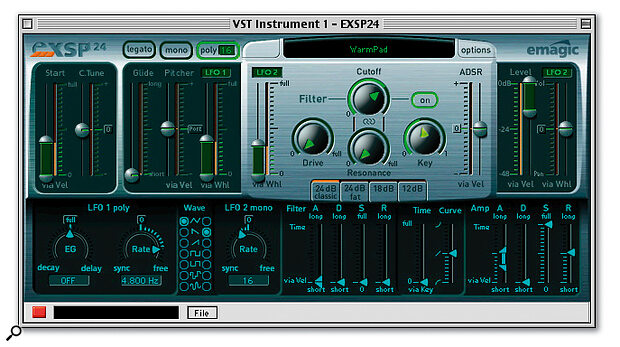 EXS24 and EVP88, two of Emagic's dedicated plug‑ins for Logic, are now available in scaled‑down form for VST‑compatible sequencers. But what has been lost in order to make the instruments work as VST plug‑ins?

Emagic have recently released two VST‑compatible plug‑ins based on scaled‑down versions of the existing EXS24 and EVP88 Logic‑only plug‑ins. As you might expect, the CD‑ROM‑based VST versions can be used within any Mac or PC VST 2.0‑compatible music program. 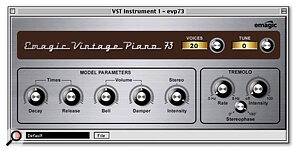 EXSP24 is a playback‑only version of the EXS24 sampler reviewed back in SOS September 2000 (read the review on‑line at https://web.archive.org/web/2015..." target="_blank). Unlike its 'big brother' EXSP24 can't be used to record samples or to create programs using audio files recorded in the host program, although it can import 16‑or 24‑bit Akai and SoundFont 2 library sample programs, as well as Emagic's own sample format. A useful library of around 500Mb of assorted samples comes with the package.

Despite the lack of sampling facilities, imported samples can be reshaped quite extensively using EXSP24's resonant filter, envelopes and modulation facilities, which are accessed via the control panel. Modified programs can then be saved for later use. Furthermore, because the sampler is VST 2.0‑compatible, any real‑time control changes can be recorded. When importing Akai samples, the Akai Import option needs to be selected from the Options menu before you insert an Akai CD‑ROM into your computer, otherwise it will be rejected as a disc in an unrecognised format. SoundFont 2 samples, on the other hand, simply need to be dragged into the Sampler Instruments folder, whereupon they will be converted automatically when you first load them. Sadly, however, the facility for auditioning individual samples prior to importing has been omitted from this version — you can see the titles, but you can't actually listen to a sample until it has been imported.

The supplied samples come neatly organised into folders, sorted by type, and any sample programs that are subsequently imported can be dragged into whichever of these folders is most appropriate, or you can create a new folder.

Like EXS24, EXSP24 is very easy to use, and the samples load like lightning compared with a hardware sampler — most programs load within a second or two. The sound quality is limited only by your audio I/O and the latency entirely depends on your computer/driver/audio interface combination; on most modern machines, it's so low as to be unnoticeable. I tested it on a Mac G4 running Cubase VST v5, and it felt just like a hardware instrument as far as response was concerned.

EVP73 is based on the Fender Rhodes Suitcase model that came with the Logic‑only EVP88 plug‑in reviewed in last July's SOS (see https://web.archive.org/web/2015..." target="_blank), and because the Rhodes sound is modelled rather than sampled, it responds extremely well to playing dynamics. As on EVP88, the decay and release of the modelled tines can be adjusted, as can the volume of the bell and damper components of the sound, but the nice distortion, phaser and chorus of the original have been left out. The tremolo effect remains, however, and because EVP73 is a VST plug‑in, it's easy enough to add a phaser plug‑in or some other form of processor later in the signal chain.

EVP73, perhaps unsurprisingly, can manage a maximum polyphony of 73 notes, but you may want to select a lower number to conserve computing horsepower. A fine‑tuning control is provided and, even though there are relatively few user adjustments that can be made to the sound, customised settings can be stored in the same way as with other VST plug‑ins. Similarly, the controls can be automated, and if the Stereo control is turned up, the notes are spread across the soundstage, with bass notes at the left and higher notes at the right.

Both these plug‑ins work beautifully, and even copy protection is straightforward (it's simply a matter of reinserting the master CD‑ROM at random intervals when prompted to do so). However, I'm surprised at some of the omissions compared with their Logic‑only counterparts. For example, not leaving the sampling facility in EXSP24 seems crazy, even though importing samples is very straightforward. Considering how many people now use their samplers only to play library sounds (audio loops can often be used directly in the host software without a sampler), an affordable play‑only VST sampler that can access the most popular library formats makes a lot of sense, but if you want to create your own samples in a VST environment and you're not a Logic user, Steinberg's Halion looks like a much more serious prospect.

EVP73, meanwhile, sounds wonderfully lifelike, but leaving out that overdrive and phaser seems a little mean, especially as they're such an integral part of the sound of a real Rhodes. I imagine that Emagic feel there has to be some differentiation between EVP88 and EVP73, but I'd have thought leaving out the other piano models would be enough. If you can live with these omissions, I have no hesitation recommending either of these plug‑ins based on usability and sound quality — I'm just glad I'm a Logic user, and can make use of the 'full‑fat' versions.

These instruments are welcome additions to the VST plug‑in market, but may have been pared down too much for the tastes of some users, especially in the case of the missing piano effects in EVP73.

Field Music: Building A Track In The Studio
3 weeks 2 days ago.