JoeMeek's 500-series modules comprise variants on circuitry used in their range of 19-inch rackmount gear. They're designed to work in any standard (ie. VPR Alliance specification) 500-series chassis — such a chassis providing the power needed to run them and the means of getting audio into and out of the modules, of course. If you were hoping for a classic stereo JoeMeek compressor to make the transition to the 500-series format, well, all I can say for now is that there are rumours! For now, we have the PreQ preamp, the MeC optical compressor and the MeQ equaliser. All have balanced inputs and outputs and each requires a supply current from the rack in the 9-130mA range. They're presented in the familiar dark-green livery of the latest range of JoeMeek units, and all of the buttons are backlit, making it easy to see at a glance what facilities you've engaged.

Based around a Cinemag audio transformer and Burr Brown amplifier ICs, the PreQ is a mic/instrument preamp that also incorporates an easy-to-use de-esser and a variable second-order high-pass filter, either or both of which can be bypassed. If used in a chassis that incorporates a mix bus (such as the Radial Workhorse), then a jumper on the PCB enables several PreQ modules to feed that chassis's mix bus. In fact, all three modules support this feature.

Up to 65dB of gain is available for mic-level signals, and the preamp is equipped with a 25dB pad and polarity invert switches, as well as switchable 48V phantom power. An eight-segment meter (PPM, referenced to +4dBu) tracks the levels from +12dB down to -24dB. The preamp's equivalent input noise (EIN) is -127.5dB unweighted (150Ω source) and the total harmonic distortion is 0.001 percent for a +4dB output at 1kHz. The frequency response extends from 20Hz right up to 70kHz, as measured between the -3dB points, and the circuitry can output up to +28dBu before clipping. The instrument jack, which presents the high input impedance expected by instruments such as electric guitar and bass, is located on the front panel, allowing easy access even when the module is in a racked chassis.

In use, the mic preamp behaved cleanly and predictably, with a reasonably graceful lapse into distortion when pushed hard — if you push hard enough, it will, of course, sound unpleasantly distorted, but as the limits are approached it is capable of adding a more subtle warmth before the 'grit' sets in. That's something which is aided, no doubt, by the use of a transformer in the audio path. 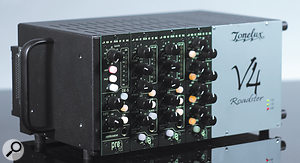 I particularly liked the sweepable low-cut filter, whose turnover frequency can be swept from 25Hz all the way up to 200Hz, as the fixed 80Hz one-size-fits-all solution that's offered by so many preamps isn't always ideal.

In addition to the expected 'amount' control, the de-esser offers a 'Hi' switch, which is intended to cater for situations where the sibilance occurs at a higher frequency than is typical, and a single red LED lights to indicate when the de-esser is being triggered. This processor was effective, insofar as simple de-essers go, and during my review tests it worked pretty well in taming more modest amounts of sibilance without introducing lispiness. I have a great means of testing de-essers, as my dentist replaced a capped tooth and left me with a 4.8kHz sibilant peak that I can really exaggerate if I try! Faced with that challenge, the PreQ's de-esser certainly helped — and while it couldn't provide a complete cure, that didn't surprise me, as even something pretty sophisticated like the SPL de-esser finds it a challenge.

The original JoeMeek product line made its name by improving on the crude lamp/photocell compressor circuit used in legendary producer Joe Meek's own studio (it was designed by the man himself), to make it more stable and predictable in operation. Since then, variations on that reworked compressor design have appeared in a number of JoeMeek products, and it makes another appearance here. With optical compressors, both the ratio and the shape of the compression curve tend to wander from the theoretical values that we might expect from, say, a VCA compressor — and it's this that gives them a unique musical character.

In this 500-series incarnation, there are controls for Comp (threshold), Slope (ratio), Attack time, Release time and Make-up Gain. A Fast button works in conjunction with the attack time control to give extra emphasis to transients, and an eight-segment LED meter follows the gain reduction. Link and Slave switches allow pairs of MeCs to be used for stereo operation, by feeding both compressors with the same side-chain signal to avoid image shifts. To set things up for stereo use, you need a TRS link cable, which plugs into the two mono modules at the bottom of their front panels. The Link buttons must be depressed on both units and the Slave button must be in on one of them. However, if you have a Radial Workhorse rack, you can link the channels using that rather than a separate cable. A bypass button completes the picture.

As with the preamp, the technical spec is not unimpressive, with an EIN of -91dB and distortion again at 0.001 percent when the signal is below the compressor threshold (any distortion that kicks in when the compressor is working is a necessary part of the opto character). Ratios of up to 10:1 can be dialled in. The actual setting must be done by ear, though, as these opto-compressors have a soft-knee character, which means that ratio increases gradually as the signal approaches the threshold level. The attack time can set be anywhere from one to 100 milliseconds, and the release is variable from 0.1 seconds up to three seconds. A +28dB output level can be sustained before clipping. 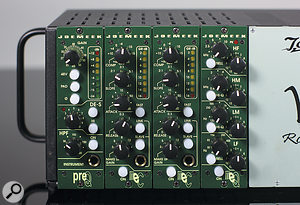 From left to right: the PreQ mic preamp also features an instrument input, a de-esser and a variable high-pass filter; the pair of mono MeC optical compressors can be linked for stereo operation; and the MeQ is a four-band EQ, with the top and bottom bands being switchable between shelving and bell types, and the middle two featuring a switchable Q setting.In operation, aside from the improved technical specs, the character of the MeC's compression was just the way I remembered it from the first-generation JoeMeek units: it's lost none of its charm. In other words, it's possible to pile on quite a lot of gain reduction, and even though you can tell something is happening, it's always something musically supportive. There isn't that unpleasant 'squashy' quality that so many compressors deliver when they're invited to work outside their comfort zone. There's also little, if anything, in the way of transient detail loss, especially with that fast switch engaged, thus making the MeC suitable for sources like acoustic guitars and drums, as well as vocals. In fact, even deploying it on complete mixes, I found it hard to coax any obvious gain-pumping out of the MeC, even when using very fast attack and release times in conjunction with the highest ratio, with around 15dB of gain reduction on the peaks. Ultimately, then, this is a great choice of compressor for keeping levels under control and adding a little musical density, but it's probably not the one to go for if you want to create a pumping house mix! The ability to link two for stereo operation means that treating stereo mixes or submixes is both straightforward and effective, with no image shifting when the level of one channel is significantly higher than the other.

The last unit in this review trio is the MeQ, which is a fairly conventional four-band equaliser, with two band-pass mid controls plus high and low bands that can be set either to shelving or bell characteristics. Once again, the circuitry uses high-quality Burr Brown ICs. The frequency ranges are as follows, and each of the four bands has a ±15dB gain range:

The mid bands don't have fully variable Q, so they're not true parametric filters, but the Q can at least be switched between 'normal' and 'high'. The only form of metering is a clip LED, and an overall EQ bypass button is located at the bottom of the panel. This time the EIN is 97dB (with the EQ off), the distortion is the same, low 0.001 percent, and the maximum output level is, again, 28dB. To my ears, there was nothing particularly unusual about this equaliser, but it's worth noting that it maintained tight control of the low end, even when I needed to add a fair amount of boost. I like the option to switch the highs and lows between shelving and bell types too, as there's often a need to add a little boost to the bass end, but without that boost continuing all the way down to the bottom of the spectrum. I tend to apply the term 'workmanlike' to devices such as this, but that's in no way disparaging — it just means that it is the right tool to get the job done in an efficient manner.

As with JoeMeek's rackmount and desktop products, these 500-series incarnations carry out their allotted tasks effectively and with the minimum of user effort. The compressor deserves a particular mention here as it is almost impossible to get a bad sound out of it, but all three modules perform well while remaining affordable, so if you think that plug-ins still don't quite cut it, this may be the way to go without taking up too much real estate.

Taken together, these three modules would create a pretty versatile channel strip, with the emphasis on clarity and natural-sounding compression. Should you wish things to sound more assertive then you could do worse than pair the JoeMeek preamp/de-esser and EQ with a different compressor.

There's now a huge range of 500-series modules from a variety of manufacturers. At a similar price to the JoeMeek modules come offerings from the likes of Warm Audio, Golden Age Project, Sunset Sound, Valley People, Studio Projects, Lindell Audio and SM Pro. If you have more cash available, this list of manufacturers grows very fast indeed!

The fundamental JoeMeek character, which will be familiar to many who have used the company's 19-inch rackmount and half-rack-width boxes, has been successfully retained in this much more compact form.

£229 per module including VAT.