Small mics and tubes aren't always the best of friends, but this little newcomer proves that they can be. 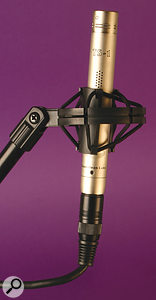 Chameleon Labs are a US-based company who aim to produce affordable but high‑quality audio hardware for both the professional and project studio markets. The TS1, the first of their products we've looked at, has been designed in the USA but built in China, keeping the cost down while maintaining a good standard of finish that's much as we've come to expect from the better Chinese mic builders.

I normally associate tube mics with chunky, large-diaphragm models, but TS1 looks much like any other pencil condenser mic, with only the seven‑pin XLR and additional power supply really giving the game away. This mic comes with interchangeable cardioid and omni capsules, featuring a diaphragm fabricated from gold-sputtered Mylar, and there's also an optional hypercardioid capsule and an adaptor for AKG CK‑series capsules available. The aluminium case houses a compact shockmount and has space for three capsules, as well as the mic with a capsule fitted. The PSU is switchable between 115 and 220V, and has switches for power and standby, as well as charmingly retro lamps. There are no pads or filters on the mic or the PSU.

A standard dual‑triode tube such as an ECC83/12AX7 won't fit in a body that's only 0.75 inches in diameter, so the design is based on an original circuit that uses a miniature 5840 single‑triode tube. A series of small holes drilled in the mic body, over where the tube sits, aids cooling.

A basic technical spec is provided, but there's no frequency plot to show whether there's any presence lift and, if so, what characteristics it might have. Sensitivity is quoted as ‑35dB at 1kHz, where 0dB=1V/Pa, and the noise figure is ‑19dB A‑weighted, which is adequate but not especially low. Maximum SPL handling is 130dB, and with the cardioid capsule fitted the frequency response is specified as 70Hz to 20kHz ±4dB (rather than the usual ±3dB). With the omni capsule, it's 30Hz to 20kHz, again ±4dB.

Small‑diaphragm mics are usually good at capturing transient response, so I started by testing the TS1 on hand percussion, including djembe and darbuka. The tube of the TS1 lent weight to the sound, but there was also a nicely extended, yet smooth high end, which gave plenty of brightness, but without graininess or harshness. This should make the TS1 attractive as a drum overhead, where a full sound is needed, but with plenty of transient detail in the cymbals.

As an acoustic guitar mic, the TS1 ticks all the boxes, and finding a sweet spot isn't difficult. The tube enhances the guitar body depth, while the high end really nails the complexity of string‑pick attacks, sounding airy rather than harsh.

For vocals, although you might instinctively reach for a large‑diaphragm mic, don't discount the TS1. It may well suit some voices better than your usual choice, with the tube circuitry's flattering warmth balancing the extremely articulate high end. Tests (with a pop shield) on spoken word also confirmed its potential as an excellent vocal mic.

I conducted all my tests with both the cardioid and omni capsules, and the tonal consistency was pretty good, but the omni had the more open characteristic of a pure pressure capsule, and would be my preferred choice where possible.

The Chameleon Labs TS1 is not what you'd call costly — especially when you consider that it's a tube model — but it puts in an impressive performance, combining versatility with a subjectively pleasing sound quality that should appeal to the more serious hobbyist and the professional alike. Its applications parallel those of Neumann's KM184 and similar small‑diaphragm mics, though it has its own tonality, the tube adding a touch of warmth and somehow smoothing the highs without sacrificing brightness or detail. This is the first mic I've tried from this company, but I have to say I'm very impressed.

There are very few small‑diaphragm tube mics on the market, and none that I know of at this price. A healthier budget would bring mics from Telefunken and Microtech Gefell into the equation.

The TS1 puts in a strong performance as a studio all‑rounder and didn't fail to impress on any of the sources I tried it on, even vocals.