The idea of mounting two capsules in one mic body isn't new, but Lewitt Audio have added their own twist... 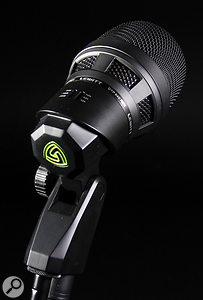 Lewitt Audio are one of the most recent companies to join the microphone manufacturing industry, with their first products appearing at the NAMM and Pro Light & Sound exhibitions as recently as 2010. The driving force behind this Austrian-based company is Roman Perschon, who heads up the design team, while microphone production is masterminded by Ken Yang at one of the largest and most modern Asian microphone-manufacturing plants. Between them, they have managed to bring over 25 different microphones to market in just a few years, although we've only managed to get our hands on one so far: Paul White reviewed the Lewitt LCT640 multi-pattern capacitor microphone in the August 2012 edition of Sound On Sound (/sos/aug12/articles/lewitt-lct640.htm).

On review here is the DTP640 REX, the flagship model in the company's DTP Percussion Series. This series is, as the name implies, optimised for drum-miking applications — both recording and live sound — and the DTP640 REX is a dual-element microphone intended for kick drums, although it can also be used on other bass instruments.

The underlying concept of this kind of microphone is to combine a large-diaphragm (32mm) dynamic cardioid capsule (which is intended primarily to capture the character of the kick beater), with a small-diaphragm (22mm) cardioid electret capacitor capsule to focus on the shell resonances and decay. The two elements are mounted one above the other within the same physical microphone body to ensure precise time-alignment, so that their outputs can be mixed together to achieve any required tonal blend.

Other dual-element kick drum microphones are available, of course, such as the Audio-Technica AE2500 and its lower-cost sibling, the ATM250DE, both of which have been reviewed in Sound On Sound (the December 2003 and April 2012 issues, respectively), and the DTP640 REX has a very similar form and overall design. This chunky new microphone measures 158mm in length by 71mm in diameter, and it weighs 755g. The 5/8-inch threaded stand adaptor (supplied with a 3/8-inch converter) is an integral part of the microphone body, and also incorporates the five-pin output XLR connector.

As you would expect, the electret capsule requires standard phantom power on its own output XLR to work (with a very modest 2mA current drain). The dynamic element works without power, obviously, but is quite happy if phantom is present on the cable. However, there is no sharing of power, so the electret capsule won't work if phantom is only on the dynamic connector. The nominal sensitivity is 0.4mV/Pa for the dynamic capsule and 2mV/Pa for the electret (which equates to roughly 14dB gain difference). The electret's self-noise rating is given as 28dB(A) SPL, and its maximum SPL (for 0.5 percent distortion) is 150dB (rising to 160 or 170 dB SPL with the pad options).

A 1.5m Y-cable is supplied with the mic (along with a leather storage bag and a miniature screwdriver), to convert the five-pin connection into two standard three-pin XLR connectors, each with labelled cable sleeves to identify which provides the dynamic element signal, and which the capacitor element. If you're wondering why the DTP640 REX would be supplied with a miniature screwdriver, the answer is to adjust the two deeply recessed slide switches on the top of the microphone body. The left switch introduces a 10 or 20 dB pre-attenuation pad for the electret capsule's impedance converter, while the right switch controls the two 'enhanced frequency response' (EFR) modes (see below). 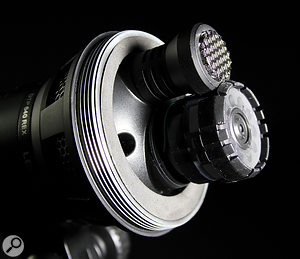 Removing the outer basket reveals the two capsules (capacitor at the top, dynamic underneath), aligned such that their outputs always remain in phase.

In standard operation, with the EFR switch in the top (flat-response) position, the two capsule outputs can be connected to adjacent channels on a mixing console and blended to achieve the desired tonal character, with the dynamic element tending to provide the 'thud' and 'click', while the electret brings out more of the body resonance and decay. Both capsules have broadly flat frequency responses, although there are very modest hints of 'smile' curves to lift the very low end and add a tiny bit of HF presence.

Switching to the middle, 'Dynamic' EFR position emphasises that 'smile' response for the dynamic microphone quite considerably, adding roughly 10dB of low bell EQ boost centred at about 50Hz, and a broad HF lift of a similar amount above about 2kHz. In other words, it boosts the boom and click dramatically, to match the typical tonality of many conventional kick-drum mics. The nominal sensitivity of both capsules remains the same as in the standard mode, and the electret microphone's response is completely unchanged.

The third switch position is called the 'Dual EFR' mode, and this applies some extreme and complementary equalisation to both the capsules, as well as changing their sensitivities. The dynamic capsule's output has a hefty bass cut below about 2kHz, leaving just the clicky elements of the drum sound between about 3kHz and 5kHz. The electret capsule has the opposite high-cut filtering, to leave a broad peak response centred at 70Hz that captures only the drum boom, up to about 150Hz. The sensitivity of both capsules are also matched to 1mV/Pa, to make tonal blending easier.

As it happens, I own and use regularly the Audio-Technica AE2500 dual-element kick-drum mic, and although that model costs almost twice as much as the Lewitt design, it still makes sense to compare the two in a practical situation. So, I installed both microphones in an open-fronted kick drum, placing them in similar positions symmetrically on either side. At the console, I set a typical amount of gain on each of the four channels and then faded each up in turn, as my tame drummer started to flex his leg muscles.

The immediately obvious difference between the two microphones was the relatively low sensitivity of the Lewitt's dynamic capsule and the large imbalance between its two elements. The Audio-Technica mic's dynamic capsule was only about 3dB less sensitive than its electret (which was a few decibels more sensitive than the Lewitt mic's electret), while the DTP640 REX dynamic output was way down in comparison. In practice, there was no problem getting enough level from the mic, and actually the electret output needed to be padded down, but the disparity between channel gain settings was a little unsettling. The obvious and pragmatic solution, though, is simply to always run the Lewitt mic with the 10 or 20 dB pad switched in, which makes balancing channel gains a lot easier. In direct comparisons, I also noticed that the DTP640 REX's electret capsule was slightly noisier than the A-T offering — but I think we can forgive that, given the price differential!

I found that the flat EFR mode most closely matched the tonality of the A-T mic, and once the gain structure had been optimised, the two performed quite similarly. Switching to the Dynamic EFR mode gave a more typical kick-drum mic sound, and provided a great solution when there is one kick drum channel available, presenting plenty of LF weight and HF click, plus a nice mid-range scooping for clarity.

As far as I am aware, the Dual EFR mode is a unique feature, and I quite liked the flexibility of having the 'thump' and 'click' available on separate faders. Of course, much the same thing could be achieved by dialling in fistfuls of console EQ with the mic operating in its normal mode, but it's nice to have it available at the click of a switch.

I have become a big fan of the dual-capsule kick-drum mic approach, and found the Lewitt mic compared quite favourably with my own A-T AE2500 in many ways. I would recommend keeping the 10dB pad switched in for the electret, to balance the two capsule outputs more effectively, but with that small proviso, the DTP640 REX is a good-sounding and very versatile dedicated kick-drum mic.

Two other dual-element kick-drum mics worth considering are the Audio-Technica AE2500, which costs roughly twice as much, and the same company's more affordable ATM250, at about 40 percent less than the DTP640 REX.