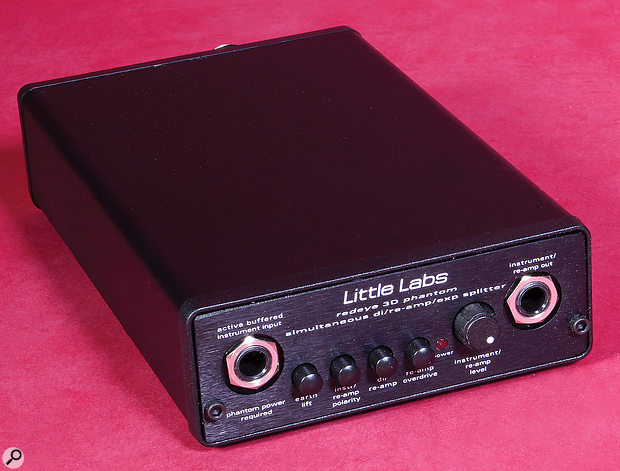 Little Labs seem consistently to release useful little boxes that perform well and solve all the irritating little problems in everyday recording. Their original Redeye was no exception: a simple but high-quality and great-sounding combination of DI box and re-amp box, all in a single package. Little Labs claim — and the amount of chattering about the subject in various production forums would seem to lend credence to the claim — that more and more people are re-amping these days, in an attempt to fine-tune the sound of a guitar or bass after tracking. To meet the demand for re-amping tools, they've decided to update the Redeye, and the fruit of their endeavours is the Redeye 3D Phantom.

Having had the opportunity to play with one of these natty little devices, I can confirm that the sonic quality is, again, excellent, presumably due in part to the custom-wound transformers: the Redeye 3D phantom just gets on with its job without being in the least bit intrusive. This new version includes some thoughtful features, too. For example, when it comes to DI'ing, the user now has the choice of using a phantom-powered, high-impedance (10MΩ) buffered input — the idea being that you can capture signals from sensitive passive or piezo pickups without the load adversely affecting the tone — or a passive instrument input. For re-amping, the basics are simple. You just feed a line-level signal from your DAW or mixer into the box, which converts the signal to a high-impedance, guitar-level one that can be passed to your amp via a standard guitar jack cable. You don't have to choose between DI'ing and re-amping, though, as you're able to do both simultaneously if you wish to. You can also chain multiple devices together, in order to feed several amps simultaneously from a single input (although you'd have to really love re-amping to go to those lengths!)

Good DI boxes — with very few exceptions — feature high-quality audio transformers, and therefore end up costing more than you might think from looking at the small metal box in which they come. In fact, it's not at all rare for one to cost as much as the Redeye 3D Phantom. Judged on this basis, then, the price looks rather competitive, given the quality on offer and that you have both active and passive DI and re-amping all in the same box. There really is little else to say. It's easy to use and works well.

Everything You Wanted To Know About Studio Headphones.
3 weeks 1 hour ago.