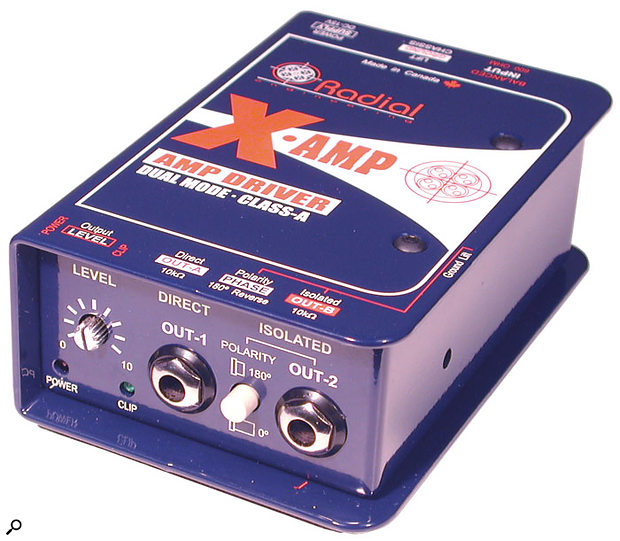 With the massive strides software has made in recent years, there are now more ways to record the electric guitar than there are for just about any other instrument — but sticking a microphone in front of an amplifier remains the method that most recording professionals prefer. The problem with this approach is that it usually means the amp sound can't be modified after it has been recorded, other than by applying EQ and other familiar processes. It may also lead to unacceptable spill problems.

Early on in the evolution of pop recording, engineers discovered that if they could, alongside the mic signal, record the clean (direct) guitar sound on to a spare track, they would be able to play the signal back through a guitar amplifier (set up in a different room) later on, while mixing. This approach offered much more flexibility and control over the mix, because it allowed different microphones to be used, and mic positioning and amp settings to be changed, according to the needs of the song. The new guitar/amp/microphone setup would then be recorded in the usual way, and added back into the mix along with the recorded tracks.

Getting A Clean Feed

Getting the clean feed is easy. The guitarist plays through an amp as normal, but with an active DI box inserted between the guitar and amp. The hard-wired input-link socket feeds to the amp, so there's no tonal change caused by the DI box, while the active buffered output is recorded. You can also record the miked amp to a separate track (a sensible idea, as you just might get the perfect sound first time!) but, in any event, the amplifier is usually necessary to give the player the right feel while performing — after all, there'd be no point going to all this trouble if the performance you captured was compromised as a result. 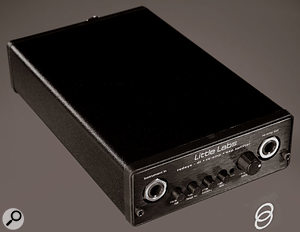 Some companies such as Little Labs (whose Redeye, pictured, we reviewed in SOS May 2007) and Radial (we'll be reviewing their X-Amp, also pictured, soon), produce dedicated devices for re-amping. These accept a line-level signal and present the guitar amp with the correct level and impedance.

You should give thought as to whether to place the DI before or after any effects pedals, but this is really common sense: if the pedal is critical to the performance (for example, a wah-wah), then place the DI after the pedal. However, you get greater flexibility by placing the DI before any effects — you can always place these before the amp when re-amping, if you need to.

Feeding the recorded sound back into the guitar amplifier is best done using a dedicated re-amping kit, as this will match the level and impedance of the signal to what a guitar amp expects a guitar pickup to 'look like'. However, satisfactory results can be obtained simply by feeding an output channel from your DAW into the guitar amp, and then adjusting the DAW output level so that what you hear when playing the recorded DAW sound into the amp's clean channel is roughly the same as when playing the guitar directly into that channel. You can then tweak the amp, microphones and so on to get the sound that best suits the song.

Where the cable length between the amplifier and DAW is longer than a typical guitar cable, you can use a guitar pedal as an active signal booster, keeping the pedal close to the DAW end of the chain. Many pedals still function as active buffers when bypassed, but an alternative is simply to use an EQ or compressor pedal with the controls set to give no effect. Should ground-loop hum become an issue, a transformer-coupled DI box with the output wired for unbalanced operation should solve the problem.

There seems to be a bit of mystery surrounding re-amping, but that is really all there is to it. Even where a performance has been recorded using feedback to sustain notes, the resulting signal will have been captured on the original take — so long as this is real feedback, with energy going back in to the strings rather than 'squeal' pickup feedback, which is not likely to be a desirable effect in any case. Though I've not had cause to try it yet, there may be potential here to get some interesting (or at least different!) sounds by taking a performance that was DI'd with a heavily overdriven setup at high volume, in order to create feedback/sustain, and then reamping this through a quieter, clean amp, such as a Fender Twin Reverb, which should give you the extra sustain but without the distortion.