Q. Can you help me solve my audio playback problems? Skip to main content

Q. Can you help me solve my audio playback problems?

I run an Intel Pentium 4 PC with a Creative SoundBlaster Live soundcard as my default playout device, alongside an M-Audio Audiophile 2496 soundcard, which I use for recording and playback purposes. But I'm unable to get sound out of Cubase, Adobe Audition or the Windows XP Sound Recorder application; only from Real Player. Also, sometimes things do not record when they should, so somewhere I'm getting my configurations wrong. Can you suggest anything that might help? 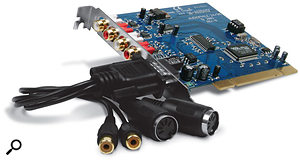 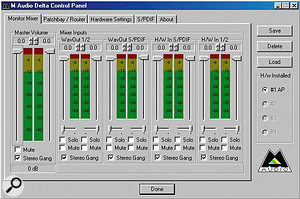 M-Audio's Audiophile 2496, above, is a popular choice in the basic PCI soundcard market. It comes with a Control Panel applet that enables you to set the levels of your computer's audio signals and route them to various outputs, and this is often the place to begin troubleshooting. SOS contributor Martin Walker replies: The first thing to do in any situation where audio is missing is to narrow down possible causes of the problem, and it's generally easier to start simple (checking cables and the like) before progressing to more complex things, such as the configurations in audio applications. Assuming you've ensured that all items of external equipment (ie. the amplifier, speakers and connections) are in order, you can turn your attention to the computer side of things.

Start with a simple process, such as playing back a WAV file through Windows XP's Sound Recorder. This will check that the MME-WDM drivers are installed and working correctly. To play back the file, make sure that your audio interface is allocated to sound playback in the audio page of the Sound and Audio Devices applet of the Control Panel. (Windows Media Player also used to be a useful application for such tests, but nowadays it has many potentially confusing options.)

Once you've established that these drivers are in order, and you're getting sound out, it would then be wise to move on to checking out your low-latency ASIO drivers inside more serious audio applications (both Cubase SE3 and Adobe Audition 2.0 require ASIO drivers for low-latency recording and playback).

In the case of your Audiophile 2496, make sure you've chosen the M-Audio Delta ASIO audio driver option in Cubase. For the simplest signal path you should open up the M-Audio Delta H/W applet from the Control Panel, navigate to its Patchbay/Router page, and select Wav Out 1/2 to be routed to the H/W Out 1/2 output sockets. Doing this will bypass the various options of M-Audio's Monitor Mixer, but at least you will have confirmed that basic playback works.

Unfortunately, your setup is complicated by having a second soundcard installed, and particularly since it's the SoundBlaster Live model, whose mixer utility can be particularly confusing, with a dozen input channels for playback duties alone. If, as you say, the SoundBlaster Live has been chosen as the default Windows Audio device and you can't hear playback, you've probably got one or more virtual faders pulled down in the soundcard's mixer utility.

Your intermittent recording issues also suggest routing problems or fader issues, so try pulling the faders up until you discover which one is the culprit.

While the SoundBlaster Live does have a number of attractive features, such as DSP effects and a built-in Soundfont playback engine, unless it provides something that you can't live without, I would suggest that you abandon it and rely on the M-Audio Audiophile 2496 interface for all applications, for several reasons. Most important is that the Audiophile 2496 offers low-latency ASIO drivers that will let you hear your recording and playback within a few milliseconds, rather than the half-second or more of your SoundBlaster's MME-WDM drivers. The M-Audio interface also offers significantly better audio quality than the SoundBlaster Live card, with lower background noise levels. What's more, switching cards will also avoid other issues, such as the SoundBlaster's fixed 48kHz engine (about which you can read more here: www.soundonsound.com/forum/showflat.php?Cat=&Number=271).

Overall, by concentrating on one audio interface, rather than juggling between two, I suspect you'll also be able to get on with making music, rather than wondering where your audio has disappeared to!