With the ability to blend between valve and solid-state circuitry, Lewitt's LCT940 is a genuinely innovative and versatile microphone. 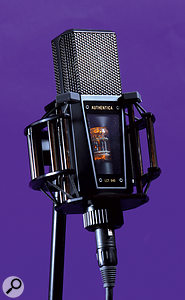 Lewitt are relative newcomers to the microphone market, having only been founded three years ago. However, their designs — originated in Austria but built in China — are both technically mature and interesting. So far we've seen only two models in the flesh: Paul White reviewed the LCT640 multi-pattern capacitor microphone from Lewitt's "reference class” Authentica series in the August 2012 edition of Sound On Sound, and I reviewed the DTP 640REX dual-element kick-drum mic from the DTP Percussion Series in January.

The subject of this review is another Authentica-series model: the flagship LCT940, a multi-pattern, large-diaphragm FET/valve microphone, which was launched last year. Lewitt makes the bold claim that this microphone "will revolutionise modern studio recording procedures and help engineers and artists to react more quickly to a desired change of style and sound”. I'm not so certain about the revolution, but the LCT940 does certainly offer the unusual feature of dual impedance-conversion circuitry (FET and valve), with the ability to blend the outputs of both to shape the final sound character. The overall design of the LCT940 is similar to the LCT840 valve mic, while the FET circuitry is identical to that of the LCT640 — although the tonal character is slightly different because of the larger enclosed space within the head grille around the capsule.

Unpacking the review model's shipping box revealed a large black metal suitcase with a foam-lined interior. Nestled safely within was the microphone itself, a substantial power supply and control unit, an impressively large cat's-cradle shockmount, a foam-ball windshield and an eight-metre connecting cable, fitted with unique gold-plated 11-pin XLR connectors. I've never seen more than seven pins in an XLR shell before, so this is a new one on me! There was no handbook supplied with the microphone, and none available to download from the company's web site, but I did discover that the 'tech-graph' web page for the LCT940 includes an interactive graphic of the control unit, with annotations explaining what each control does — which is just as well, because there are some 'hidden functions'.

The microphone itself is rectangular and rather industrial-looking, and certainly on the large size, measuring 192 x 60 x 46mm. Its die-cast metal body is also quite heavy, at 662g, and the substantial shockmount isn't exactly feather-light either — but it does come with a 5/8 to 3/8-inch thread adaptor! The microphone is secured in the suspension mount with a simple clutch-style screw clamp at the base, which grips the 'stalk' at the base of the mic body and allows quick installation and removal. Two plastic clips at the top of the inner cradle can be rotated to support the back of the mic, pressing it tightly against the front of the inner cradle to prevent rattles.

The hefty black mic body is dominated by a large multi-layer hexagonal grille with a fine wire mesh inside. This head basket extends for about 65mm at the top to protect the DC-biased, one-inch, centre-terminated, dual-diaphragm capsule. A large plastic window covers most of the rest of the body to reveal the selected (for gain and noise) Chinese 12AX7 double-triode valve within. This window is coated internally with a conductive film to minimise electromagnetic interference, and yellow LED back-lighting is employed to create a visual sense of 'warmth'. Replacing the valve is not a simple chore, and the mic will need to be returned to a dealer should that need arise. However, the internal construction is to high standards, with surface-mount components used for most of the circuitry.

The power supply houses buttons for choosing the microphone's filter and pad settings, as well as rotary controls for selecting the polar pattern, and blending between the valve and FET impedance-conversion circuitry.

A brushed, anodised, black-aluminium case features 'hidden-until-lit' indicators behind a glossy black front-panel section to show the current status, with rotary controls to adjust the FET/valve blending and polar-pattern selection, and push buttons for the pre-attenuator and high-pass filter. Four pad options are present on the left, running from 0 to -18dB in 6dB steps, with four high-pass filter settings available on the right-hand side: bypass, 12dB/octave at 40Hz, and 6dB/octave at either 150 or 300 Hz. The last two filters are intended to compensate for proximity effect, hence the gentle slope, while the 40Hz option has a steeper slope to reduce unwanted subsonic noise. The electronic switching used to control the filter and attenuator modes is claimed to be noiseless but, on the review microphone, changing the filter and pre-attenuator settings resulted in quite substantial thumps.

The left rotary control blends the signals from the FET and valve impedance-conversion circuitry. An illuminated red dot indicates the current setting, although intermediate points result in an annoying flickering of adjacent lights. The polar pattern is determined by the right-hand control, which is a spring-loaded encoder. Five 'standard' patterns (omni, sub-cardioid, cardioid, hypercardioid, and figure-of-eight) are indicated with white pattern symbols, while four intermediate patterns are shown with white dots between the relevant patterns, which are then illuminated in red.

Pressing and holding the encoder knob for more than two seconds activates the 'key lock' mode (borrowed from the LCT640 model), which turns off the white illuminated rings around both rotary knobs, and disables the pattern, filter and attenuator controls to prevent accidental operation. Strangely, though, the FET/valve blend control remains active, despite the illuminated ring around the knob being extinguished.

Also borrowed from the LCT640 is an auto-attenuation function, toggled by pressing and holding the pre-attenuator button for more than two seconds. When the auto-attenuation system is active, the rings around the control knobs turn red. The system cleverly engages the next available pad setting if the internal electronics detect clipping — although you have to try really hard to activate the system, since the maximum SPL (for 0.5 percent distortion) is 143dB for the FET circuitry and 140dB for the valve electronics, rising to a massive 161dB/158dB with the -18dB pad engaged!

A similar press-and-hold function on the filter button toggles the 'clipping history' mode, with the instant result that the rings around the control knobs flash alternatively red and white. If clipping has occurred in the current session the pad indicator will also flash. The memory is reset by exiting the mode, selecting the auto-attenuation mode, or by disconnecting the microphone.

Allow me to lay my cards on the table straight away: for me, the backlit valve window, along with the key-lock, clipping history and auto-attenuate functions are all entirely pointless and cynical gimmicks. Despite my very best efforts, I completely failed to trigger the automatic attenuation mode — I just couldn't find a way of generating a sound loud enough! But in any case, years of training and experience have enabled me to recognise when a mic is clipping (it's something to do with the sound it makes), and I am quite capable of adjusting the pre-attenuator myself if necessary. I can also control any demonic urges to change the mic's settings mid-session, and I know small signal valves don't glow... So let's ignore all this marketing silliness and move on to the important matters.

The idea of combining both valve and solid-state electronics in the same microphone is a very interesting one, and I actually found the ability to blend the outputs of both signal paths to create a hybrid sound character surprisingly useful. This aspect of the LCT940 is no gimmick, which is a good thing as it goes a long way to justifying the relatively high price of this model. If it helps, think of the LCT940 as two mics in one — a high quality solid-state mic and a nice valve mic — which it really is!

Lewitt recommend the LCT940 for vocals and a wide range of acoustic instruments, including drums, piano, guitar, strings, woodwind and brass, and I wouldn't query those recommendations at all. The mic easily has the headroom capability to cope with close drums and brass instruments, while its smooth frequency response and low noise suit the subtle timbres and characters of pretty everything else.

Working first with the FET signal path, I found the LCT940 sounded very detailed, but in a refined and polished way, with a naturally neutral sense of body and scale. The high-end lift gives clarity and air but without sounding harsh or exaggerating sibilance, while the low-end bloom adds a slightly larger-than life character without becoming muddy. As a vocal mic the LCT940 worked very well on most voices I tried it with, and I would be quite happy to use this as a main vocal mic instead of the Audio-Technica AT4040, Neumann TLM103 or AKG C414B-ULS mics that I would normally reach for. Its imposing size also helps to flatter some vocalist's egos, and the pretty yellow glow from the valve distracts others!

On acoustic guitar, clarinet and cello it turned in fine performances again, with an overall neutral tonality that was solid at the bottom end and with a nicely judged airiness at the top, all in well-balanced proportions. The proximity effect is well controlled once the mic is more than about a foot away from the source, and the gentle 150Hz and 300Hz filter settings can be used to tame any LF excess if you do need to work very close to a source. Changing the polar pattern of a mic always reveals any response variations with pattern very clearly, but I was impressed with the consistency of the LCT940 across all of its directional patterns (cardioid to fig-8). Moving from sub-cardioid to omni did result in a more noticeable tonal character change, but this is largely lost behind the inevitable change in room acoustic sound anyway.

Moving the Blend control around to the valve side shifted the mic's tonality smoothly from the very open and detailed, but not exaggerated, clarity of the FET signal path, to a noticeably richer, more rounded valve character. It doesn't lose any clarity in this mode, but it does gain some nice harmonic complexity, particularly when driven by a close, loud source. Setting the control part-way allows the degree of richness to be balanced to suit the nature of the source and the desired tonal character in a way that I really liked. Sure, you can achieve something similar with processing in a mix, but the way the mic responds naturally to the dynamics of the source is very attractive, and the ability to dial in the required effect instantly affects the performance and the whole feel of the recording session in a positive and creative way.

While the Lewitt LCT940 is an expensive mic by the standards of many, this really is two mics in one — and two good and very usable mics at that. The styling of the mic and its control unit won't be to everyone's taste (they are a little garish for me), but it all works well and sounds very good. Well worth checking out if you are looking for the kind of flexibility and quality on offer here.

I'm not aware of any other dual-mode FET/valve mics with the blend feature of the LCT940, so there are no directly comparable models. However, in terms of comparable quality, the Audio-Technica AT4040 and AT4050, the AKG C414B-ULS and XLS, Telefunken AR51, the Neumann U87 and TLM67, Blue Bottle, Soundelux E251 and the Brauner Valvet all come to mind.

An unusual multi-pattern large diaphragm capacitor microphone with entirely separate FET and valve-based impedance-converter electronics, the outputs of which can be blended to produce a hybrid tonal character.