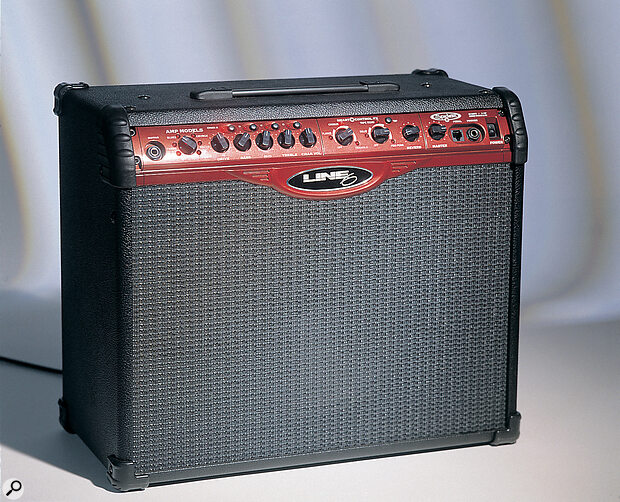 Paul White tries out a modelling guitar amp with a wide range of tones and a stereo DI output.

Following their success with the POD digital modelling guitar preamp, Line 6 have further simplified the concept and built it into their new Spider range of guitar combos. Available in two versions, with 1x12‑inch and 2x10‑inch speakers respectively, the Spider is an open‑backed combo with stereo recording DI via the headphone socket. Existing Line 6 products give the user a choice of several emulations of well‑known amplifiers, but the Spider takes a different approach by combining the best elements of different models to provide what the designers feel are the most useful clean, bluesy and overdriven tones. These models have a wider tonal range than the amp‑specific models of other Line 6 products, which tend to adhere faithfully to both the strengths and limitations of the originals.

The 1x12, 50 Watt Spider reviewed here is surprisingly light — the power amp section is a single‑chip, high‑power solid‑state device similar to those used in in‑car sound systems, while the sound of the amplifier is entirely created by digital modelling. Working across the control panel, the first knob selects between six different amp tone types: Clean, Twang, Blues, Crunch, Recto and Insane! The usual Drive, Bass, Middle and Treble knobs are provided along with a channel Volume knob, but there's no presence control — you simply turn presence on or off by holding down the Tap button and turning the Treble knob past midway. Extra overdrive, extra volume boost and a noise gate can be switched in by similar processes involving the Drive, Volume and Reverb knobs. Four buttons above the amp controls allow four patches to be stored (just press and hold a button to store the current patch), and if the optional Floorboard controller is used, eight more memory locations become available along with a guitar tuner and a wah‑wah.

The effects section comprises three knobs for modulation effects, delay effects and reverb. Three types of modulation are addressed by a single knob: Flange, Chorus and Tremolo. Essentially, one‑third of the control travel is allocated to each effect, with off being the fully anticlockwise position. The delay knob works in a similar way for Delay, Ping Pong and Tape Echo, which dulls the repeats to emulate a vintage tape unit. A Tap Tempo button is used to set the delay rate (feedback adjusts itself automatically to the delay time) while reverb is fixed in character and variable only in amount.

The master section comprises a Master volume control, a socket to connect the optional Floorboard or FB4 foot controllers, the phones outlet and a power switch. Plugging into the phones output mutes the internal power amplifier, and the same phones socket may be used as a stereo recording feed. Speaker simulation is included and the effects are output from the phones socket in stereo, even though the amp itself is mono.

Though the Spider is simpler than the POD, its tonal range is more than adequate to recreate most popular guitar tones. The clean tones are reminiscent of Fender amps, while the various overdrives seem to be loosely based on the Marshall, Boogie and Soldano school of amplifiers. All the settings respond pretty much like the real thing with a good range of touch response and a nice harmonic squeal. Particularly impressive are those hard‑to‑get, mildly overdriven blues tones. Another plus is that this little amp can go very loud; even the clean sounds (which have an authentic tube edge to them) can be played at a very high level without breaking up.

As an easy‑to‑use way of getting a guitar sound that's very close to the tube models it emulates, the Spider is exceptionally good, and though the effects editing is quite limited, what's on offer sounds 'right' most of the time. If you want to keep it simple but still have lots of great guitar tones at any volume level, this is definitely an amp to audition.

This is Line 6's most accessible product to date in terms of ease of use, yet it still delivers most of the classic guitar sounds and it records well.