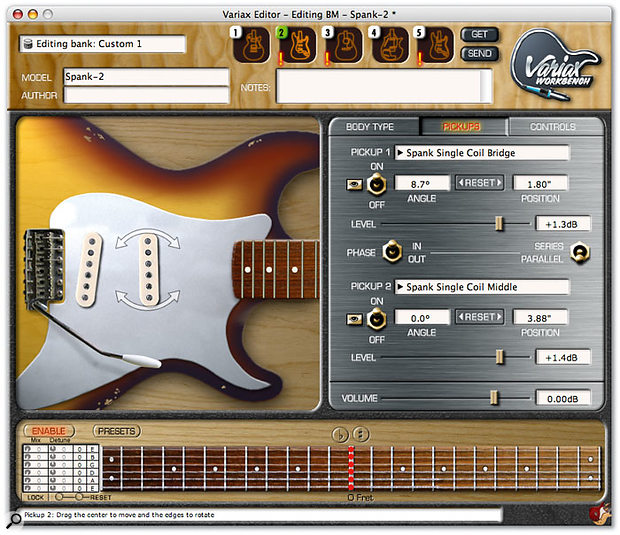 The revolutionary Variax modelling guitar is already a uniquely versatile instrument, but now Line 6 have added an extra dimension with the ability to customise almost every aspect of its operation.

By now most guitar players will be aware of the Line 6 Variax guitar even if they've never played one, but I was still surprised to find recently that this somewhat radical instrument now accounts for around 2 percent of the total global electric guitar market. Now that that range includes some more upmarket guitars and a choice of tremolo or hardtail designs, a greater number of serious players are starting to use them on the road and in the studio, where the total lack of electromagnetic buzz and the ability to switch between guitar types is a huge attraction. I'm not about to get into an argument as to whether the digital modelling wizardry inside Variax is a satisfactory replacement for a shedful of conventional guitars, but for myself, I think they have enough to offer that it's worth owning one, and most of the electric guitar models get very close to what they purport to emulate. The acoustic sound is certainly fine for live use in a rock band where feedback might otherwise be a problem, and then there are those endearing 'trick' sounds such as the sitar, the 12-string, the resonator guitars and the banjo. What may be less well known is that Line 6 also produce some very easy to use Workbench editing software for the Variaxes, which allows you to design 'your own' guitars and save your own custom tunings.

To use the Variax Workbench software, you need a Variax Electric 300, 500, 600 or 700-series guitar and a suitable Mac or PC. A version is also available for the Variax acoustic models, though this of course does not include pickup modelling. Windows users need XP or Windows 2000 with at least a 500MHz Pentium III processor, one available USB port, and 256MB or more RAM. Macintosh users need to have OS 10.3.8 or higher and a 400MHz or faster G4 or G5. Those with Vetta II amplifiers or Pod XT Live processors can use these to connect to the computer via USB, in which case the Variax Workbench software can be downloaded free of charge from the Line 6 web site. If you don't have one of these devices, you'll also need to buy a Variax Workbench pack, which includes a small buss-powered USB interface that connects to the socket under the rubber cover on your guitar, via the included RJ45 cable.

One neat aspect of Variax Workbench is that you can hear changes to your custom guitar almost as soon as you've made them, as long as you have the conventional guitar output plugged into an amplifier (usually via the XPS footswitch) — no audio from the guitar is sent to the computer, only editing data. Note that your Variax still needs to be powered when you're editing — the USB interface doesn't power the Variax. Though the memory space in a Variax is limited to 60 presets, you can create as many guitars as you like using Workbench 's Librarian and then store them on your computer's hard drive. You transfer to the guitar only the ones you need. Your 'new guitars' may be transferred to any of the Variax switch positions, though my guess is that most users will choose the 10 Custom 1 and Custom 2 presets at either end of the selector knob range so that they leave all the main guitar models intact. The way this works, for those who aren't familiar with the Variax, is that the selector knob acts much a like a bank selector, while the five-way switch on the guitar body selects a patch from within that bank. With the factory guitars, this switch often acts as a pickup selector, but it doesn't have to — each switch position can call up an entirely different guitar if you want it to. 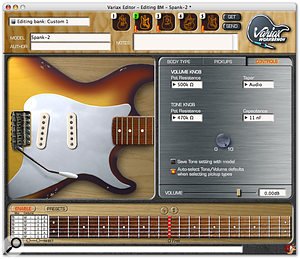 Editing even extends to the ability to vary the capacitance of the Variax's virtual components.Once Variax Workbench has been installed, which is very straightforward, pressing the New button gets you into the workshop part of the program which is divided into three tabbed screens: Bodies, Pickups and Controls. There's also a section at the bottom of the screen that deals with creating alternate tunings, where you drag little red blobs up or down the strings from the zero position to provide up to one octave of pitch change per string in either direction. This can be used to create any custom open tuning or virtual capo, though if you move too many semitones from the original pitch, some processing artifacts tend to be audible. You can even turn off the low string and then set up a five-string open 'G' tuning for those Keith Richard licks. There are also controls for adjusting the individual string levels, and where a 12-string model is selected, you can change the degree of detuning in the string pairs.

The Bodies screen, as you might expect, allows the user to choose from a pull-down menu of body types, after which the Pickup page allows you to place one or two pickups on the body. Note that the body models also model the way the neck interacts with the sound, so where the modelled body was fitted with a maple neck, this will be reflected in the sound that's produced. For copyright reasons, the names of the bodies and pickups only provide clues as to their exact origin, but in combination with the pictures that appear when you select them, you shouldn't have much trouble guessing what is what. A full body and pickup listing is provided in the 'Parts List' box. Having a limit of two pickups per patch is not restricting as most real guitars don't allow you to have more than two pickups active at any one time, and you can create different pickup combinations and positions for each selector switch position on the guitar.

Not only can you place any of the pickups on any body, but you can also slide them to any position between the bridge and neck or you can even set them in the neck if that seems like a good idea. Dragging the edge of the pickup rather than the centre changes its angle, so pickup placement really is child's play. The sound goes a bit glitchy while you are actually moving pickups but it settles down almost immediately you stop dragging, allowing you to play your new changes. Additional controls set the individual pickup levels, turn the individual pickups on or off and switch the two pickups in or out of phase.

Just a few minutes using Variax Workbench proves that there are some very worthwhile hybrid combinations of bodies and pickups to be had, but if I put on my 'Why don't they do this?' hat, I can always think of things to add. For example, the graphics do not including positional dimensions for the pickups (though there is a readout of pickup angle), and guitar designers would surely find this a very useful research tool. Furthermore, while there are plenty of body types from which to choose, you don't get to choose maple or rosewood fingerboards, and in my experience, the choice of neck often has a significant influence on the character of the guitar sound, especially with Strats and Teles. Perhaps giving the user one body model of each neck type for the most important instruments would be the way to deal with this? I've also found that differences between the various models of actual Variax guitars, particularly those with different fingerboard woods, result in a slightly different tonality, so maybe some way to compensate for the particular guitar model you're using would also be useful.

Within Workbench, you can't set whether the body has a tremolo or not, and the resonance of the springs has some bearing on the sound — indeed, Line 6 model this factor on the 'Spank' model, which is obviously based on Fender's classic Stratocaster, and damp the springs in the tremolo-equipped Variaxes (at least in the Variax 600 I used for these tests) to prevent them colouring the non-tremolo models. It could be interesting to deliberately add these spring resonances to guitars that don't normally have tremolos. There's no option to fit pickups to the acoustic guitars; this is understandable, as the acoustic models are based on the miked-up sound of the instrument, but there are times when it's nice to mix the miked sound with that of a single-coil magnetic pickup. I'm not sure whether this is a philosophical limitation or whether there simply isn't enough processing to do acoustic mic modelling and pickup modelling at the same time. And before I stop myself saying 'and another thing', perhaps it would make sense for future versions of the software to also emulate string gauge, as that affects the tone significantly. If you could tell the software what strings you actually had fitted and which ones you'd like to sound like, it could be a real benefit and I'm sure the technical gurus back at Line 6 HQ could figure out how to do it in their lunch break!

As a means of reconfiguring what the Variax already offers, Variax Workbench has the benefit of being both simple and powerful, with some very nice graphics to put the user at their ease. The ability to store libraries of custom sounds is to be welcomed and best of all is that the software is essentially free — you only pay for the USB interface if you don't have a Vetta II or PodXT Live to hook up your Variax to your computer. Being able to twang away on the guitar as you shuffle the pickups and bodies also makes the customisation process very immediate and it is educational to see what a big difference a small change in pickup position can make. The bottom line is that if you have a Variax and you have a computer, then you owe it to yourself to get Variax Workbench. Of course you can always think of more things you'd like to have added to the capabilities of the software (such as pickup magnet age and height adjustment), but what you get is a good compromise between flexibility and user-friendliness, with a great graphical interface.

If you have a Variax, this software enables you to create custom shop guitars on your own computer and play them while you're tweaking. It doesn't get much easier than this.