With their latest monitor design, M-Audio are aiming higher than ever before. We put the EX66 to the test...

Although they are by no means new to the studio monitor marketplace, with their new EX66 monitor M-Audio have set out to compete with the kind of big-name monitors found in professional facilities as well as project studios. This aim is reflected in the EX66's UK price, although, given what it offers, it's still very competitive within its market sector. The EX66 is a rear-ported, two-way active monitor, but it uses a less commonplace dual bass/mid-range driver topography and features internal DSP-powered signal processing. Having the port on the rear panel reduces audible port wind noise, but it does mean you need to leave some space behind the cabinet — placement less than six inches from a wall is not recommended. 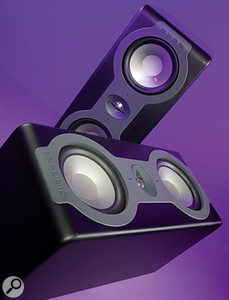 The tweeter sits centrally between two identical bass/mid-range drivers. Though this looks like an invitation to site the speakers horizontally, they are in fact designed to be stood upright. The two bass/mid-range drivers are six inches in diameter while the titanium-dome tweeter is one inch in diameter and sits in a shaped waveguide to control the horizontal and vertical dispersion angles at the crossover frequency.

M-Audio have used their own proprietary driver technology, where the crossover and equaliser functions are handled by the onboard DSP rather than analogue circuitry. Because the crossover and filtering are done in DSP, this also made it relatively easy for M-Audio to add a digital input for those who need it. The DSP also uses IIR (Infinite Impulse Response) filters to counter any remaining cabinet resonances, though the box seems to be very rigidly built anyway and incorporates internal bracing.

For the bass/mid-range driver, M-Audio worked with UCLA's Department of Materials Science to develop a cone structure that was light and yet resistant to breakup modes within its frequency range. The EX66's crossover is set at 2.56kHz and the designers claim that the first breakup mode occurs at around 6.5kHz where the signal level is already down by over 30dB thanks to the steep, fourth-order Linkwitz-Riley crossover. The drivers have an inverted dust cap and silver/grey-coloured cones that seem very well damped.

The front edges of the MDF cabinets are radiused to minimise diffraction and the cabinet has an attractive black satin finish. Two blue LEDs show when the speakers are powered up and a chunky moulded driver surround gives the whole front baffle a very stylish look.

Normally, studio monitors are set up at head height and angled in towards the listening position, but in this case the recommended orientation (unless the speakers are very widely spaced) is to have them facing directly ahead, as this widens the perceived stereo image while still providing a solid centre image thanks to the wide horizontal dispersion characteristics that have been designed into the speakers.

Early reflections from walls and equipment, particularly mixing consoles, also affect what you hear, which is partly why M-Audio went with the arrangement of two identical bass/mid-range drivers wired in parallel with the tweeter midway between them. This setup, in conjunction with the asymetrical tweeter waveguide, deliberately constrains the monitors' vertical dispersion into a narrower-than-usual angle, reducing the amount of audio energy being sprayed onto your mixing console or work desk. At the same time, it produces a wider horizontal dispersion pattern, which results in a wider sweet spot. These directional characteristics also make the speakers suitable for multi-channel (surround) systems and should help avoid problems in rooms with lower than ideal ceilings.

One very practical inclusion with each monitor is a reference audio CD, which includes a set of calibration signals to aid setting up the monitors in the user's room. To make the best of this you'll need some means of measuring levels or frequency spectrums, but most DAW software includes metering that could be used to do the job providing you have an omni-directional microphone with a flat frequency response. There's pink noise (both in and out of phase), single tones at ISO standard third-octave frequencies and constant-level sine-wave sweeps. By checking how consistent low frequencies sound (or measure) at the listening position using the slower-frequency sweeps, you can quickly see if you have bass-end problems that need to be corrected by moving the speakers or treating the room.

Each EX66 monitor is driven by two 100W PWM (Pulse Width Modulation) amplifiers, one to drive the two six-inch drivers and one to drive the tweeter. Normally you need much less power to drive a tweeter than a woofer, but having plenty of headroom can't hurt. Each amp feeds into a 4Ω load, where the damping factor is matched to the impedance characteristics of the drivers so as to tightly control the amount of overhang or ringing that is particularly evident on low notes in systems with insufficient damping. In practice this should allow deep bass notes to be reproduced with clean transients and accurate decays. 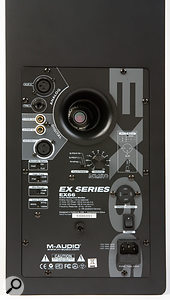 The circuitry features RF interference filtering, output current limiting, over-temperature protection and suppression of turn-on and -off transients, though I did still notice a small amount of noise when powering up the speakers. A subsonic filter takes care of frequencies below the design range of the monitors.

As with most active monitors, the rear panel is a pretty busy place, with an IEC power inlet and mains switch, analogue and digital inputs and a number of switches to adapt the performance of the monitors to various physical environments. Balanced XLR and TRS jack analogue inputs are present, along with a level-control knob. The digital input can be handled in either S/PDIF or AES-EBU format, with a sample rate up to 216kHz (set by the incoming source). When the analogue inputs are being used, the converters run at 24-bit/96kHz. Rear-panel switches determine whether the speaker should respond to the left or right channel of a stereo digital source and a link cable between the two speakers can be used to distribute the same digital source to both in as straightforward a way as possible.

The Acoustic Space switch, which has full, half and quarter positions, allows for placement in free space, close to a wall or close to a corner. High-frequency adjustment is possible via a slide switch offering +2dB, flat or -2dB options. There's further control over the mid-range (flat or +2 dB) and a choice of low-cut filter frequencies (37, 80 or 100 Hz). Normally the 37Hz setting would be used, but to check what a mix might sound like on domestic speakers with a limited low end, there are the 80Hz and 100Hz options. These would also be useful if using the speakers in conjunction with a subwoofer that didn't feature its own crossover.

In my own studio, with the EX66s set up in place of my usual monitors, I got very good results straight out of the box, with the Acoustic Space switch set to half space, the bass at maximum extension and all the other settings flat. The low end is surprisingly strong and well extended, to the extent that I began to think it might be a little larger than life, but it isn't so exaggerated as to present a serious problem. In any event, the bass end can be tamed somewhat by switching to quarter-space mode.

As expected, the titanium tweeters have a slightly forward quality about them, but stop short of sounding harsh, and the EX66s score very highly on enabling you to separate the different instruments in a mix. I noticed that the level of background noise is slightly higher than I would expect from conventional analogue active speakers, especially at high input-gain settings, and I suspect the use of DSP filtering may have something to do with this. However, at sensible input-gain settings (around 50 percent is fine and still allows the speakers to be driven to full volume), this should be unnoticeable from the listening position, unless you are fortunate enough to have an extremely quiet studio!

The stereo imaging is particularly good, with a stable centre image, while the overall tonal balance seems smooth and free of obvious vices other than the aforementioned slightly larger-than-life quality of the bass. M-Audio are right to recommend that the speakers be mounted vertically, as they sound a hint phasey when used on their sides. The sweet spot also becomes very narrow and tall with more energy than is ideal being directed towards the desk and ceiling. When stood the right way up, they do sound like very 'grown-up' monitors.

Having the option of a digital input is useful for those who need it, though I'm still a little cautious insomuch as there's always the possibility of your computer locking up and firing full-level digital noise into the monitor system. The monitors could probably survive, but the experience wouldn't be a pleasant one!

I have to admit that I didn't quite know what to expect from M-Audio, as they aren't known for high-end monitors, but the EX66s might just fast-track them into the big boys' league. Within their price range, these monitors come across very well in terms of clarity, presentation of detail and bass extension. I'm particularly impressed by their ability to cut through the clutter within a mix and present each sound source as a clearly separate entity. There are occasions on which the extended low end tends to hide the detail within sounds such as bass guitars and kick drums, but as mentioned earlier, you can always tame the bass using the filter and Acoustic Space switches. I've noticed the same tendency for the bass end to obscure other aspects of the mix in larger studio monitors designed for greater bass extension, so it may well be unavoidable.

The EX66s meet pretty much all the requirements of high-end monitors. Their ability to let you hear individual elements within a mix is amongst the best I've heard and they seem very well suited to analytical listening. Mixes done on these monitors also appear to travel well, which, when it comes down to it, is what really matters.

Given the EX66's price, M-Audio are going up against the smaller Genelec, Dynaudio, ADAM and Mackie monitors, so this is where to look for the obvious alternatives. Also consider Event and Quested monitors as well as less obvious models such as the AVI Pro Nine powered version.

M-Audio wanted to create a serious studio monitor that would make people sit up and take notice, and I think they might just have succeeded. The EX66 is a great monitor for most musical genres and has the benefit of a digital input where that is a requirement.