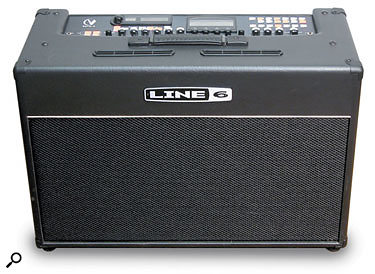 The Vetta II amp range embodies the most sophisticated implementation of Line 6's guitar amp modelling technology to date. It delivers more amp models than the original Vetta, offers more user control of the sounds, and it also features an optional digital interface for use with the Variax Digital Modelling Guitar.

While the Pod and Pod XT are undoubtedly the high sales volume success story for Line 6, the Vetta II amplifier range embodies the most sophisticated implementation of their guitar amplifier modelling technology to date, some of which has already filtered down to the Pod XT. Fortunately for existing Vetta owners, the software is upgradable (free via the Line 6 web site) so they don't get left out in the cold. Essentially, Vetta II delivers more amp models than the original Vetta, it offers more user control over the sound, and it also features an optional digital interface for use with the Line 6 Variax Digital Modelling Guitar or for connection to external digital devices. This is very neat if you're a Variax owner as connection is every bit as 'plug and play' as plugging in a conventional guitar lead.

Though it looks much like a traditional 2x12 guitar combo from the front (around the size and shape of a Vox AC30), the Vetta's control panel leaves you in no doubt that Kansas has been left far behind. However, the familiar Drive, Volume and EQ knobs (Bass, Middle, Treble and Presence) of a conventional amplifier remain, so it's not all uncharted territory, and as with the Pod range of products, the controls have a logical simplicity to them. There's a rotary control for direct selection of the amplifier model plus four further Global knobs that are designed to allow instant tweaking during performance to provide global control over reverb level, low and high EQ, plus overall volume. These global controls operate in addition to the stored parameters, so if you find yourself in a room where the amp sounds a bit dull, simply turn up the High global EQ knob and all your patches will be affected by the same degree. This type of global function was part of the feature-set of their very first Axsys modelling amp and turned out to be very practical.

The control panel features two displays: the lefthand display shows the patch name and location and has an associated rotary control that lets you scroll through the 64 factory patches and 64 user patches; the righthand main display shows the current values and positions of the controls, and may be edited using the four encoder knobs directly beneath the displayed virtual knobs. A fifth encoder scrolls through the pages whenever more than one page of edit parameters is available. There are two rows of 'soft' knobs relating to the two amplifier models, and when you move onto editing an effect, the knobs again relate to whatever parameter is displayed above as a virtual knob.

Vetta is designed so that you can choose (in the system setup) how it should respond when the amp knobs are turned. In Absolute mode, the parameter changes to match the physical knob position as soon as you move the knob. In Relative mode, however, moving the control simply adds more or less to the current value. This means the stored value of the knob and its physical position probably won't agree, but the on-screen knobs always show the actual value.

In addition to the usual array of effects and the amp EQ (which changes its character to suit the amp model selected), there's a further EQ section that can be switched to either graphic or parametric modes offering four bands of control per amplifier in either case. Each stomp box and main effect type has its own access button and pressing any of these followed by Edit gets you quickly into the appropriate editing page without having to scroll through menus. There's also a button here to turn the effect loop on/off.

The Vetta's rear panel houses the IEC mains inlet and switch, two external speaker jacks and an impedance switch for use with external speaker cabinets where you might want a wider stereo image. There's also a stereo effects loop (on two tip-ring-sleeve jacks), just in case you want to add external effects to the compendium of onboard modelled effects, plus both balanced (XLR) and unbalanced stereo (jack) Direct outputs. Digital I/O comes as standard on the Vetta II providing both coaxial S/PDIF and AES/EBU in and out, plus a CAT5 Ethernet-style socket for the direct connection of Line 6's own Variax modelling guitar (see review below). Of course a Variax can be plugged into the analogue inputs instead, but using the digital link cuts out an unnecessary stage of D-A and A-D conversion. Another very neat feature of the digital Variax link is that you can store your Variax setting as part of the Vetta preset, so that when you dial in a new preset, the guitar automatically switches to the appropriate model and pickup selector settings. And talking of neat features, you can even configure the digital I/O to work as a digital effects send/return loop if you own an effects unit equipped with digital I/O.

Completing the connections rundown are MIDI In and Out sockets and a connector for an FBV foot controller. Note: the Vetta II isn't compatible with the Floorboard or FB4 range of controllers.

The modelling concept will be familiar to anyone who's used a Pod or one of its rivals before — the signal path comprises software models of popular guitar stomp pedals, amp modelling to recreate a number of 'classic' amp tones, speaker cabinet modelling (with mic type and position simulation), delay, modulation and reverb effects, and also tremolo, gating and compression. Rather than confuse the user with multifunctionality, all the control panel buttons have a dedicated function, clearly marked on the button cap. A quick glance at the control panel reveals that up to three different modelled stomp effects can be used at once — and that's in addition to the four main effects blocks plus compression, tremolo and gate. Nice!

Further dedicated buttons allow tempo 'Tap' input for delay times or modulation rates, Amp/Cab selection, Effect Routing and a neat Double Tracking effect that's not available on Line 6 products further down the food chain. There are also extra buttons for setting up the main system parameters (display contrast, MIDI channel, etc) and one for setting the output configuration. Vetta includes Line 6's AIR modelling, which seems to create early reflections to give a room ambience effect when direct recording, and also models specific microphones and their position relative to the speaker. The room AIR effect can be switched on or off for the direct outputs as well as adjusted in intensity. There's also a digital output, a stereo width enhancer, control over the direct output levels and the option to turn the internal speakers on/off. There's also a headphones jack on the top panel when quiet practice is required, though this amp is far too much fun to use quietly!

Two Heads Better Than One?

Where the Vetta differs from earlier Line 6 amplifiers, other than in its more sophisticated modelling, is that it can generate two different amp models at the same time. You can then opt to use just one of these models or both at once, each panned to its own position in the stereo mix. The stereo mix then feeds the two internal speakers via solid-state power amplifiers. The Vetta II Combo provides 75 watts per channel (150 Watts total), while the Vetta II HD head produces double that (150W per channel, 300W total, into selectable 4, 8, or 16 Ohm loads). It's also possible to take a speaker simulated DI for recording or for feeding to a full-range PA system. Four buttons close to the input jack allow the individual amp models to be turned on/off and also toggle the display between the upper and lower rows of knobs on screen, so that both amps can be adjusted using the same four rotary controls. When both knobs buttons are lit, the amp controls adjust both models simultaneously.

For the more computer-centric user, there's a free software editor available from Line 6 (www.customtone.com) with a graphical interface that shows all of your routing and effects. It neatly lets you store banks of sounds on your computer and download from an online library of thousands of Line 6 sounds (Vetta sounds, as well as Pod, Pod XT, Flextone III, GuitarPort, etc). The latter are all upwardly compatible with Vetta II and the editor (which also works with Pod XT).