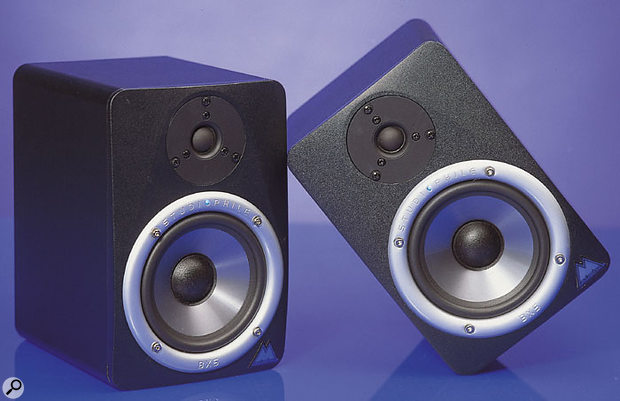 The M-Audio BX5 is two-way, compact active monitor built around a one-inch silk-domed tweeter and a 5.25-inch polypropylene-cone bass/mid-range driver. Each driver is fed from a 38W amplifier with a crossover frequency of 3kHz, while a number of rear-panel switches are provided in order to help tailor the response of the monitors to their location. Both drivers are magnetically shielded so that they can be used close to 'antique' CRT computer monitors without causing the colours to run.

Measuring a diminutive 9.85 x 6.54 x 7.88 inches, the cabinets are very solidly built, with rounded corners, and are finished in an attractive black plastic laminate. Both drivers are recessed into the baffle, and the silver mounting ring around the bass/mid-range driver houses a blue LED to show when the monitors are switched on. 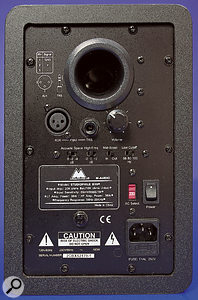 Photo: Mark EwingThe rear panel of the cabinet reveals a bass port and input connectors on both balanced jacks and XLRs, governed by a single volume control. Power connection is through the usual IEC socket and the power switch is also mounted on the rear panel. A three-way Acoustic Space slide switch corrects the bass end for proximity to boundaries by offering 2dB or 4dB of shelving low cut. The bass response may also be adjusted directly by selecting 56Hz, 80Hz or 100Hz roll-off values via another slide switch. A further switch allows the high end to be set flat, boosted by 2dB or cut by 2dB, and there's also a Presence in/out switch to add mid-range boost. This turned out to be quite subtle, helping lift out mid-range detail. A fixed, steep sixth-order filter (36dB/octave) is used to suppress frequencies below the handling range of the speakers, so as to prevent excessive driver excursions. The frequency response is quoted as 56Hz to 20kHz, which is claiming a lot for such a compact system. A matched M Audio active subwoofer will soon be available, which can used to set up stereo or surround monitoring systems, but this was not available in time for the review.

I set up the speakers on top of a double-width, wooden-topped equipment rack, close to the front edge and around 18 inches from the nearest wall, as I guessed this would approximate (or even improve upon) the way many people would use desktop-sized monitors. As usual, I conscripted my Mackie HR824s as references — I have these set with their bass roll-off switches at 47Hz, as that happens to suit my room. Evaluating the performance of the BX5s on their reproduction of familiar CDs in various styles proved very interesting. The mid-range and high end are detailed, but the use of a silk-domed tweeter manages to keep the high end reasonably smooth so that you can use them for extended periods without experiencing undue fatigue. Switching in Presence brings out the mid-range detail even more, but the effect isn't over-dramatic. No maximum SPL is quoted, but in a nearfield environment they can play very loud without losing clarity.

I settled on using the flat settings for my tests, in order to get the maximum bass end from the speakers, and discovered that the perception of bass changed depending on the type, and even the period of music being played. For example, I dug out some old Alex Harvey band material which was recorded in the early '70s, and the bass guitar and kick drum came over as quite punchy even though they didn't have the depth you'd expect from bigger monitors. By contrast, I played the latest Afro Celts album, which presents a much wider spectrum of bass energy through the use of synths and electronic percussion, and I found the perceived bass end noticeably lacking, making the sound seem somewhat 'small' and constricted. Switching to my Mackies at a similar monitoring level revealed a bass end that could move furniture, so it's my guess that the BX5's use of a sixth-order filter to protect the driver has an audible effect on the lower reaches of the bass end. It's almost as though you get to hear only the upper half of the bass spectrum, and that everything below a certain point has just been sliced off, which is pretty much what you'd expect from a high-order filter.

The reproduction of voices is quite adequate, with no conspicuous vices, and as with any speaker that has a limited bass response, the mid-range appears clearer, which makes it easier to focus in on detail. Nevertheless, the somewhat unpredictable bass response would make it quite difficult to do a full-range mix with any certainty as to the outcome — and it's not just a question of physical size, as I have a pair of AVI Neutrons (which are two-way passive monitors of a very similar size) that deliver a far more even and extended bass end.

The M Audio BX5s are, in my view, perfectly useful speakers for monitoring while recording, and their small size makes them ideal for use in desktop systems where there is little space available. Magnetic shielding is becoming less of an issue as flat-screen monitors become cheaper, but it's still a welcome inclusion. I'd be far less happy using the BX5s for mixing, other than in a secondary reference role, as their bass end is simply not extended enough to allow accurate value judgements to be made in this area. If you treat them as the modern equivalent of the Auratone to check that the playback will sound good on a small hi-fi system (but with a far more accurate high-end and mid-range balance than I remember my old Auratones having!) you won't go far wrong.

The BX5s are more than powerful enough for nearfield monitoring applications, and the mid-range and high end seem reasonably detailed and well controlled for a monitor in this price bracket. In fact, the mid-range initially appeared unusually clear and detailed, but I quickly formed the opinion that this perception was attributable to a rather weak and constricted bass response.

Ported speakers inherently have a fairly steep roll-off, often preceded by a significant peak, but the bass end of the BX5 seemed curtailed more than most speakers in this respect. To my ears the LF response has an unusually high-Q roll off — presumably a combination of the port tuning and driver protection circuitry — and the result is a rather misleading spectral balance at the bass end. I gather these speakers have been designed with a matching subwoofer in mind, and it is possible that the LF response of the satellites has been pared back in an effort to increase the overall volume. If this is indeed the case, then I would expect the subwoofer combination to fare rather better than the satellite BX5s manage alone.

I auditioned the speakers with a familiar range of commercial CDs, plus some of my own source material, and while the speakers did an acceptable job in portraying spoken and unaccompanied singing voices in terms of tonality and detail, they fared less well with bass instruments generally, seeming to convey only the harmonics above the first overtone. With more complex mixes the speakers tended to present a rather thin and confused impression of what was going on in the lower octaves. The problem was primarily one of inconsistency. For example, smaller, higher-pitched kick drums could be portrayed with reasonable solidity, while lower-tuned drums often took on the character of cardboard boxes! Similar problems afflicted bass guitars and string basses, as well as keyboards and organs. Unfortunately, relocating the speakers to change the distances from side and rear walls, although changing the overall spectrum in the expected ways, did little to redress the inconsistent nature of the low bass.

When attempting to use the BX5s as mixdown monitors I found it hard to reliably judge the character, EQ and relative level of bass instruments within a mix. Switching to a pair of passive Dynaudio BM5s (only slightly larger than the BX5s reviewed here) revealed just how much LF information and extension was missing from the BX5's output. It is usually possible to learn how to compensate for a speaker's individual characteristics, but I found this impossible to achieve in the week or so that I had to work with the BX5s — the bass end seemed just too unpredictable.

In concert with the matching subwoofer, the system performance might well reach the standard necessary of a monitoring-grade loudspeaker, but on their own I'm not convinced that the BX5s are sufficiently accurate or extended to enable mixes made using these speakers to 'travel well'. Hugh Robjohns

In most respects, these monitors are accurate enough for serious recording work, but their limited bass response makes them unsuitable for mixing unless used with a subwoofer.