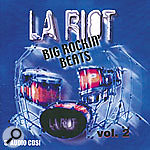 I've seen a lot of sample libraries, but there aren't many which have been put together as sloppily as this one! The content ploughs a well-worn furrow — every track contains a complete song-form drum performance in miniature, for editing into your own production — so you'd have thought it would be difficult to make a mess of it. However, they seem to have employed Mr Bean to put the whole thing together! Tempos are given incorrectly, whole tracks are repeated, extra fills provided at the end of each performance sometimes appear to have migrated from a completely different track, and the booklet has the same cheapo content and graphic design as the LA Riot: The Funky Drummers library I reviewed back in SOS October 2002.

However, don't tread on the pedal of the Bin Of Doom just yet, because the raw material on offer here is still more than worth the fiscal outlay. Remember that this three-disc set comes in at the same UK price as most single-CD releases, which means you're getting a hell of a lot of drumming for your money. Furthermore, the tracks are grouped by tempo and drummer (five took part), so you can often happily mix and match sections of half a dozen different tracks.

The recorded sound quality is also very respectable, without the click bleed and editing foibles which marred Funky Drummers. In terms of style, this library is definitely aimed squarely at those who 'rawk', and the metal brigade will particularly enjoy the abundance of clicky kicks and splashy cymbal riding. However, the scale of what's on offer here is so vast that you could use this library just as well for high-energy pop, and there are also plenty of 24-carat breakbeat opportunities if you keep your ears open.

The bottom line is that this library offers serious bang for your buck, and it would be a good first stop if you want solid rock drumming on a budget. If you pay any less than this for a library of drum performances, it's odds on you'll get something where the playing or sound quality is half-arsed, or where the choice of material is severely limited — I've yet to find a such library which is worth the effort. However, if you can stretch to this LA Riot collection, then at least you get sound quality, musicality and reasonable usability, even if the packaging shows signs of a 'no expense spent' approach. Chronic Music's competitors take note — unless you can compete with this, don't even bother getting out of bed. Mike Senior

Feeling a bit stressed? The strains of music production getting you down? Well pull up a chair, slip off your shoes, kick back and lounge with this three-CD collection (one audio and two WAV/REX 2) of 'turntable jazz and loungin' hip-hop instrumentalz'. The audio CD contains 26 construction kits that fall into three tempo groups (80, 90 and 100bpm). As suggested by the title, the kits have a nice, laid-back, smooth feel, combining jazzy chords and runs with head-nodding hip-hop beats. Electric pianos, horns, flute and live bass all feature heavily, and the playing/recording is top-notch throughout the collection. To keep things varied, a sprinkling of crackle, effects and vocal snippets are also thrown into the mix. 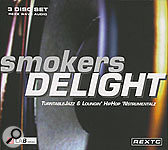 After the kits, we come to a large collection of drum loops, containing both programmed and played elements. True to the hip-hop influence, the beats are solid and well programmed, with just the right amount of punch and 'boom'. The remaining tracks are then rounded off by a collection of hits, chords and riffs, featuring keys, horns, vocal clips and atmospheres (often shoved through effects), which provide perfect one-off sounds to drop into a mix.

The first CD-ROM has all the samples for the kits included on the audio CD grouped into individual 'tool box pacs'. These are followed by the 'drum loop pacs', which consist of all the rhythm loops in three versions: the full loop, the programmed loop and a live break. This makes layering the beats a doddle, a job made even easier by the inclusion of all the separate drums as well.

The second CD-ROM has all the samples from the first, but with musical phrases and loops sorted into the three tempo groups for those who like to graze rather than use specific kits. This disc also includes all the single-hit samples and tones grouped together with the complete collection of beats (in REX 2 format) sorted into individual loops, hi hats, kicks and so forth. This disc is an added bonus but, at first glance, it's easy to think it's another full CD of additional material rather than just a reshuffle of the existing grouping!

Quality-wise, Smokers Delight is excellent throughout. The kits exude a smoky, relaxed vibe that masks the actual complexity of the compositions. The attention to detail is high, with many of the single loops and riffs good enough to spark off new tracks and ideas in their own right. If you prefer to use such collections as a bank of samples to dip into rather than using whole grooves, there are plenty to choose from (around 1900 samples in total) with piano, horn or flute riffs and one-off hits/atmospheres easily useable for just about any modern dance genre.

Niggles? Well, the limited kit tempos could be seen as a touch restrictive (although it does make mixing and matching between kits easier) and the three-CD format is slightly baffling on first inspection, but none of this can distract from the quality of the material included. Whether you're looking for chilled jazz loops, laid-back hip-hop grooves or just a huge collection of stylish, high-quality samples to throw into your own productions, Smokers Delight more than fits the bill. Nice. Oli Bell 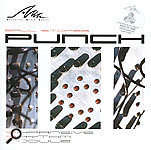 Saul Stokes designs and builds his own synthesizers. Or at least he tries to. By his own admission, his engineering skills are less than perfect — the inner workings of some of his creations having shocked more conventionally minded engineers. But nevertheless they work — in the sense that they produce sound and they haven't burnt his house down yet!

To be fair, the irregular construction of these machines is the very thing that makes them interesting. These hybrid synthesizers, containing circuitry from Moogs, TB303s and even EMS VCS3s (not to mention whatever else Stokes has seen fit to include), are capable of producing unique mutant sounds. Indeed, Stokes has based a successful career in ambient electronica on the sounds generated by his homemade instruments; building rich sonic landscapes and textures, but also using them as the source for all of his percussive sounds. Over the years he has built up quite a collection, sampling them onto an Akai MPC2000 for use in his compositions and live performances.

This archive forms the basis of the Punch ERM (Expansive Rhythm Module) CD. Comprising 400 of these home-brew electro percussion sounds, the collection is available in either Refill or WAV format and takes up 33MB on one disc. The library is divided into five rather tenuously titled sections — Kicks, Snares, Hi hats, Percussion and Effects. Emulation is certainly not the name of the game here, and there are obviously inherent problems in categorising a collection like this with traditional drum and percussive labels. A great number of the sounds don't even fit into the frequency bands you might expect, let alone sound anything like the instruments they've been catalogued under. Some of the 'snares' for example, would do equally well in the Kicks section. But this is a minor gripe, and I suspect that the only realistic alternative would be to use labels like Clicks and Squelches, which probably wouldn't be too helpful either! While I'm on the subject, I feel I should also mention that the Effects section is just a convenient container for all those weird noises that don't fit into normal percussive envelopes. Not that this is by any means a bad thing, and when I say weird, I mean 'Aphex Twin on brown acid' weird!

The sounds themselves are amazingly varied, ranging from harsh metallic drum hits and bass drums, so crunchy they might have been sampled at four-bit resolution, to light atmospheric noises and 'hi hats' which sound like a glass being tapped, high-pass filtered and time-stretched. Some use of delay and reverb is evident, and the great thing about such abstract material as this is that realism is not an issue, so if a sound is too dominant there's nothing to stop you from processing it further until it sounds exactly like you want it to. By this way of thinking, Punch ERM could be a source for a good deal more sounds than it currently contains.

Whilst this collection is undoubtedly aimed at the electronica crowd, it might be interesting to other electronic and dance musicians who want to get a bit more experimental. And if you happen to find yourself doing the sound effects for a sci-fi movie, it would be ideal! The other reason you might want to own this CD, is that you probably wouldn't have thought of half of the noises on it yourself, let alone taken the time to build your own synths to create them. David Glasper 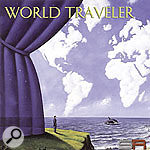 This library provides a well-recorded set of multisamples (as opposed to loops and phrases) covering instruments from around the world. It is by no means comprehensive — what single-disc set could be — but it does provide the composer with all the bread-and-butter World sounds recorded to a good standard and presented in a very playable format. The library includes the usual Spanish guitars and Latin percussion, but also takes in bazouki (remake of Monty Python's cheese shop sketch anyone?), balalaika, hurdy gurdy, hammer dulcimer, mandolin and even an antique zither. Reed keyboards, such as the harmonium and various genres of squeeze box are also present, alongside recorders, flutes and pipes from all corners of the world. There's a fairly large selection of didgeridoo drones, alpine horns and even the wonderful duduk Arabic flute (which I once suggested to a friend was a bird that went qu-quack).

Good though the duduk and shakuhachi samples are, they also indicate just how much of the character of these instruments is down to the way they are played, and no multisample sets can ever hope to catch more than a fraction of that expression. I also feel the same is true of guitar samples — which always end up sounding like some sort of harp or electric piano to my ears — and violins, which invariably sound like raspy kazoos.

We're back on safer ground with the excellent sitars and tambouras, and of course that old New Age standby, the Celtic harp. The bagpipes fail the authenticity test only by being perfectly in tune, and of course all the thumb pianos and African percussion sounds work absolutely fine as they are. Those into Celtic music will also appreciate the fine whistle samples and the Bodhran, but if you're a Mariachi band fan, you'll also find Spanish trumpets to string alongside your Spanish guitar samples. The collection finishes nicely with some excellent Chinese gongs, rain sticks, crotales and a big taiko drum. I haven't covered every inclusion for space reasons, but you should have got the general flavour of this sample CD by now.

In general, the chromatic instruments are lavishly multisampled around their middle octave, with fewer samples either side, though there's little in the way of velocity layering or sample switching, which could have been useful to add expression to some of those flute sounds. Nevertheless, this is a well-stocked library, and anyone who isn't already awash with ethnic instrument samples would find it a good place to start their collection, as it covers all the essential bases to a high standard. Paul White