Back when keyboard controllers first became available there was considerable bemusement that you would pay out hundreds of pounds for a keyboard that had no sounds. Over time, though, controllers have become a standard part of most performer and producer setups, essential for ‘in the box’ sounds via our DAW or for triggering external modules. There’s now a wide range of controllers available to choose from, ranging from 25‑note synth‑action designs through to 88‑note wooden‑key models. The development of tech has allowed for the introduction of budget 88‑note keyboard controllers that have been widely welcomed, and M‑Audio are now on to the third version of their popular Keystation 88.

On initial inspection there are a few instantly noticeable differences between this and their Mk2 model, with the most obvious one being that the transport controls are now more compactly positioned on the left alongside the other controls, instead of placed across the top of the keyboard.

The design of the modulation and pitch wheels has also changed, getting rid of the housing that was positioned around them, and the volume slider has an improved cap, which not only feels easier to grip and control than the previous model, but also feels less likely to fall off and be lost, as sometimes happened with its predecessor.

On the rear of the keyboard there are still MIDI out and USB connections, although the volume pedal socket has been replaced by an expression pedal input and there is now a lock facility. The unit can be USB powered, which is always a plus if you want to avoid yet another PSU.

The design of the Keystation is very sleek and slim. As you’d expect for such a low‑budget keyboard, the casing is made of a lightweight plastic, although the construction itself feels pretty solid.

The keybed is what I would refer to as a sprung rather than a weighted action, although it’s officially classed as semi‑weighted. Understandably it’s not as quiet as some of the more expensive models and you do get the occasional loud spring noise while playing. The surface of the keys feel non‑slip despite having no form of anti‑slip coating. It is touch‑sensitive, although at this end of the budget range there is no aftertouch. The keys themselves feel solid enough to play, with just the normal amount of sideways movement, and there is a felt lining within the keybed which dampens the action nicely. The keys are not as long as on a standard hammer‑action keyboard, and while some trained players may struggle to adapt to this lack of depth at first, this compact keybed makes this instrument ideal for small studios and homes with limited space, and obviously makes it more portable to boot.

There is no digital display on this controller, but it’s all fairly straightforward and easy to operate. The keys themselves are used to select the different functions, with each function being clearly marked above them. Pressing the Advanced button allows you to select a function or type in a numerical value, then the key labelled Enter executes the function.

The modulation wheel and volume fader are assignable and this makes this keyboard particularly appealing for composers, who can assign MIDI CC 11 to the volume fader as another way to incorporate expression into performances, thus removing the need for a separate controller unit. 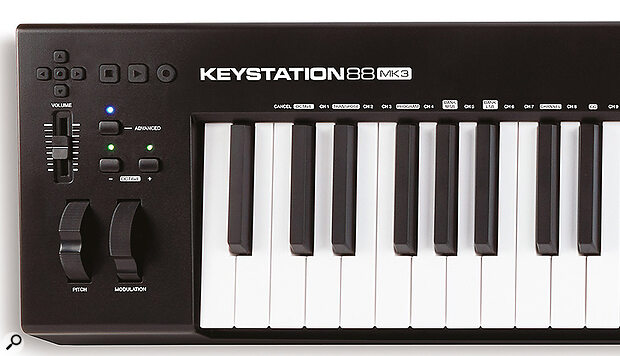 As with all modern controllers this is plug and play, allowing you to work instantly with all of the major DAWs. It’s bundled with an impressive array of software, including a lite version of Pro Tools, so if you’re new to programming then you’ll have a complete studio instantly available. This can be downloaded from the M‑Audio website when you register your instrument.

As for the performance aspect of the controller, I teamed it up with a Bösendorfer Grand VSTi for a full test of its capabilities and found it to be very pleasing to play, with a good range of expression. As is often the case with budget keyboards, the velocity curve is not always ideal and it’s difficult to get that desired growl in the lower notes, although the Keystation fares a lot better than many others in this respect. A quick adjustment of the velocity values on my selected instrument in the DAW partially remedied this while still giving enough expressive range.

This is a fantastic price for an 88‑note controller keyboard that allows for a good amount of expression, and the bundled software makes it an even better bargain.

For music producers, the Keystation 88 Mk3 is a fantastic option for those who don’t have the budget or the need to invest in a wooden‑key model. Obviously this will not give you the same expression as a hammer‑action controller but it’s pretty impressive considering the price. It would also suit beginner piano students who can team this keyboard up with a piano app on the iPhone or iPad and have 88 notes to learn with straight away. The action is actually better than some of the lower‑end digital pianos that I have tried in recent years, whose action can tend to be a little on the ‘spongy’ side.

This is also a great keyboard for gigging musicians who want something very portable with an 88‑note range or are looking for a cheap and lightweight secondary keyboard for their setup. However, I would recommend a hard case since it’s not really built for extended use on the road. There have been reports of previous models losing their touch sensitivity and fader buttons dropping off in transit after a year of continued use, so a better quality case to extend the life of the machine is advised.

There are, of course a couple of drawbacks... At this budget you’re not going to get aftertouch, and there are no splits and layers, but this sort of thing is irrelevant for most users as it can easily be set up within your DAW or performance software, and the sounds can be further manipulated by making use of the expression pedal option. And, as I mentioned before, not being able to select the velocity curve is a slight disadvantage, but again this can to an extent be remedied within the DAW.

A small thing that it would be nice to see is the means for adding an optional music rest, which would be of benefit to students and performers.

This is a fantastic price for an 88‑note controller keyboard that allows for a good amount of expression, and the bundled software makes it an even better bargain. The Mk3 is a great entry-level 88‑note controller that brings the full piano range within reach of everyone — performer, student or producer — and it would certainly be a welcome addition to my live performance setup due to its portability.

An awful lot of keyboard for very little money.