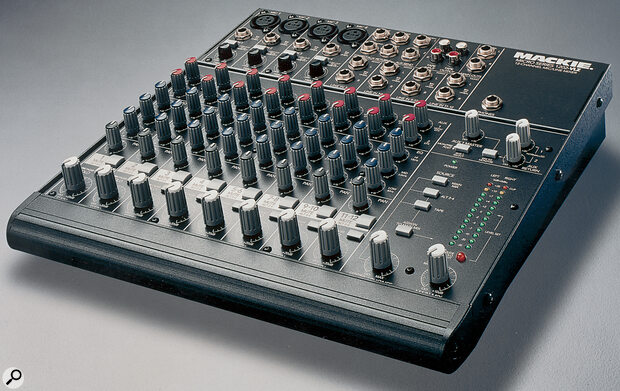 Paul White puts Mackie's new 1202 VLZ next to his original 1202 and discovers more changes than you might expect.

Mackie's original 1202 mixer (reviewed back in SOS March 1992) was one of the key products that set the company on the road to success, and it's probably fair to say that few other mixers have exerted such an influence on the mixer industry as a whole. When the 1202 was first introduced, it was supposed to be a niche product, but the niche has since turned into a chasm, with virtually every mixer manufacturer on the planet turning out their own interpretation of the ultimate mini mixer. Now the wheel has turned full circle, because Mackie have launched a brand‑new 1202 mixer. This not only includes some of the ideas used in Mackie's later and larger consoles, but also incorporates at least one feature introduced by one of its competitors — global pre/post aux switching.

One of the most appealing things about the original 1202 was its stylish simplicity — it was a steel brick with knobs on that looked as though it could survive everything except a direct nuclear strike. The lack of an external power supply was also very welcome, and the 'No Wall Warts' logo has become something of a Mackie icon. The 1202 VLZ is actually a tiny bit wider than its predecessor, and is deeper by about the width of the newly added 'armrest' extrusion, but the new tapered profile somehow conspires to make it look smaller. You only have to pick it up to realise that Mackie's 'Let's over‑engineer the metalwork' philosophy still prevails, yet the choice of knob styles and panel screening manages to stave off the impression of clunkiness that afflicts so many small mixers.

Like the original 1202, the 1202 VLZ is equipped with four mic/line channels plus four stereo line‑only channels, as well as two stereo aux returns and phono ins and outs for a 2‑track tape machine. Phantom power may be applied globally to the four mic inputs. A new addition is a switchable 75Hz, 18dB/octave, low‑cut filter on each of the first four channels. A small Trim control sets the mic gain, and standard TSR jack insert points are fitted to the mic/line channels.

As on the original 1202, the 1202 VLZ's channel strips still feature two aux sends, but now Aux 1 may be switched for pre‑ or post‑fade operation via a global switch in the master section. The 2‑band EQ of the 1202 has been replaced by a 3‑band, fixed‑mid system operating at 12kHz, 2.5kHz and 80Hz, while the straightforward stereo buss has now evolved to include the Main/Alt configuration used in Mackie's 1604 and 3204 mixers. This works by having a routing switch on each channel that switches the channel signal either to the Main stereo buss or to the Alt stereo buss, which has its own outputs on the rear panel. If you don't need the Alt outputs, then the routing switches can be used as mute buttons simply by routing any unwanted signals to the Alt output and then not sending them anywhere.

Another welcome addition that's filtered down from the larger consoles is a proper Solo system, complete with large, red flashing Solo light in the master section. When solo'd, the channel signal is heard in isolation over the Control Room/Phones output and metered pre‑fader, allowing the input levels and gain trims to be optimised. Channel gain is controlled by a rotary knob with a centre detent, as is Pan.

Other changes have been instigated inside the box to push the noise floor even further down, one of which is the use of very low‑impedance circuitry where appropriate, hence the VLZ tag (of which more in the 'VLZ Design' box elsewhere in this article).

In the Master section, separate controls are dedicated to the Main mix, Phones/Control Room, Aux 1 Master and the two aux returns, though the Alt stereo output has no controls at all — it just appears on the rear panel at whatever level the channel controls dictate. Similarly, Aux 2 has no master level control. A single button switches Aux 1 between pre and post operation while a further button named 'EFX to Monitor' enables effects to be added to a monitor mix. When the 'EFX to Monitor' switch is off, the two aux returns feed the main stereo mix as normal, but when the switch is on, Aux Return 2 feeds into Aux Send 1 instead. Being able to add an effect to the foldback output without affecting the main mix is a refinement usually only found on larger, more sophisticated mixers.

For recording applications, a separate Control Room output is fitted to the rear panel, and this is controlled by the same knob that handles the phones level. A small number of selector buttons enable the control room output (or the phones if connected) to listen in to the main mix, the Alt output or the tape return. A further button allows the tape return to be added into the main stereo mix.

Mackie's original 1202 was so well behaved that it's difficult to tell if the 1202 VLZ is even quieter without the use of specialised test equipment. Tests on the mic inputs confirmed them to be exceptionally clean and quiet for all normal applications — my only gripelet was that I felt that the Trim control tended to bunch most of the gain in the top quarter of the travel.

Having a proper solo system makes it easier to optimise the mixer inputs, while the 4‑buss routing coupled with 3‑band EQ makes this a very flexible mixer quite capable of coping with basic multitrack recording. The EQ seems to work exactly as it does on my own LM3204 keyboard mixer, which is very flexible for an EQ with a fixed mid frequency. Indeed, I understand that some of the surface‑mount technology used in the LM3204 has been employed to get so much channel circuitry into such a small space. Like other Mackie EQs, this one seems to do the job smoothly without making the result sound boomy, scratchy or nasal.

On balance, the 1202 VLZ is a great 'toolbox' mixer that can help out as an extra mic amp one day and a 4‑track recording mixer the next. It's particularly useful in live situations because of its simplicity, rugged construction and flexibility, but some users may be put off by its lack of faders.

Of course, when the first 1202 hit the market, there was no real competition, but the 1202 VLZ isn't going to have the same clear run. There are numerous worthy competitors, many of them British, but I nevertheless feel Mackie have got enough right in the 1202 VLZ to make it a big seller. The Mackie name is synonymous with good design, and the 1202 VLZ also has the required combination of chic, price and features to make you want one.

In any mixing console, mix buss noise is caused by the need to add numerous signals using virtual earth mixing amplifiers, and the more channels you have, the greater the noise. However, the amount of noise is also affected by the impedance feeding the virtual earth mixing point, but this can't be made too low, otherwise the virtual earth amplifier won't be able to provide the necessary feedback current to maintain its own virtual earth input. Even so, the way Mackie have approached the design has made it possible to drop the value of the mix resistors to around a third of what you might normally expect without overtaxing the mix amplifiers — a technique they're now using in all their new mixers to improve the noise performance.

In addition to VLZ, the mix amps mix at ‑6dB (negative gain) which doubles the the amount of internal headroom when compared to a more conventional design. Combine this design approach with Mackie's exceptionally nice mic amp circuits and you have a mixer that rivals many dedicated mic preamps for performance.

Metering is handled by a couple of 12‑section, LED bargraphs which follow the control room source selection unless a Solo button is depressed. The 1202 VLZ is capable of coping with both ‑10dBV and +4dBu signal standards, but in order to avoid confusion, the meter scale has been arranged so that 0VU = 0dBu. This is strictly non‑standard, as most mixers read 0VU for either a +4dBu or ‑10dBV signal, depending on their operating level, but Mackie's WYSIWYG approach avoids ambiguity by displaying the absolute signal level, regardless of what standard you're operating.

On the input side, the 1202 VLZ's XLR mic inputs and TSR jack line inputs are all electronically balanced, and the aux returns will also accept balanced signals. For unbalanced use, you simply plug in a normal, unbalanced jack lead.

The Main and Alt output jacks are balanced, but on the rear panel, you'll find another set of Main outputs on balanced XLRs, which may be be attenuated by 30dB using the adjacent Level button, making the output suitable for feeding other mixer mic inputs or even camcorder inputs. Electronic isolation means this output can even be fed into a phantom‑powered mic input without problems.

As with the original 1202, the insert points on the first four channels follow the usual TSR jack format and come after the low‑cut filter, but before the channel EQ. Because the same jack carries both the send and return signals, the inserts are unbalanced, and like on the 1202, they can double up as direct outputs. To get a direct output while preventing the signal from passing through the rest of the channel, all you need to do is plug in a mono jack. To take a direct feed without upsetting the original signal path, you can plug a mono jack in 'half way', as far as the first click or use a special lead (plugged all the way in) made up using a stereo TSR jack plug with the tip and ring connections joined together.

The 2‑Track tape connections are on phonos (unbalanced).