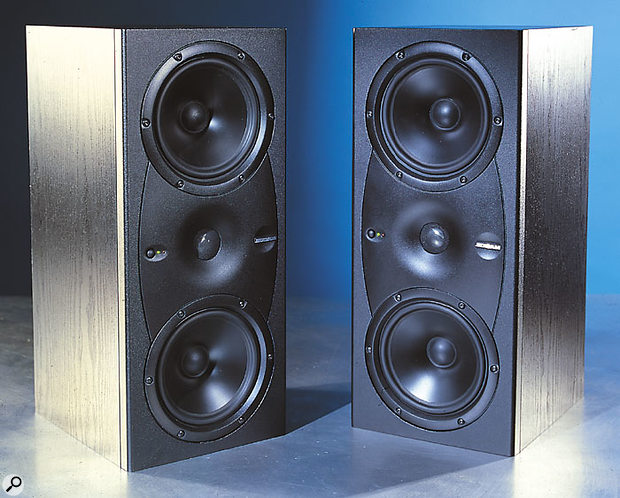 Mackie continue to expand their range of studio monitors by combining an innovative D'Appolito design with their existing passive radiator technology.

Mackie's HR626 follows on from the HR824 and HR624 to further expand the company's range of active monitors. It employs the same design principles as these earlier models in most respects, but also utilises the so-called D'Appolito driver layout, named after Dr Joseph D'Appolito, who championed this particular geometry. As I understand it, if the speakers are arranged so that a single tweeter sits directly between two identical bass/mid-range drivers and in line with their centres, the topology qualifies as D'Appolito. This particular design has one 6.7-inch woofer at each end of the baffle with a one-inch dome tweeter set centrally within a cast-aluminium waveguide designed to match the dispersion characteristics of the drivers at the crossover point. The monitors measure 8.8 x 19.6 x 12.4 inches and weigh 31lbs each, so they're fairly compact.

Both bass/mid-range drivers are built into cast-aluminium frames, where the 1.25-inch voice coil works within a ferrite magnetic structure that employs an additional field-cancelling magnet. This aims to reduce the external magnetic field that might otherwise cause picture distortion in CRT video monitors or TVs. A field-cancelling magnet is also fitted to the tweeter, which is driven by a one-inch voice coil. The use of a waveguide provides symmetrical horizontal and vertical coverage specified as 120 degrees, ±10 degrees.

One benefit of the D'Appolito layout is that the speaker can be used either vertically or horizontally, though I'd instinctively use it vertically where possible, as this should produce the most accurate off-axis response. On the other hand, it looks seriously cool when used horizontally, and the sweet spot still seems plenty wide enough. In addition to its use as a stereo studio monitor, the HR626 is also suitable for use in surround systems, with or without subwoofers.

Like the other monitors in the Mackie HR series, the HR626 is a two-way bi-amplified design using servo feedback circuitry to minimise low-frequency distortion. The tweeter is driven by an integrated Class-AB amplifier utilising what is described as 'parametric servo feedback'. The conventional bass port is replaced by the now-familiar Mackie passive radiator, which resembles a 6 x 9-inch elliptical speaker (a little smaller than the one used in the HR824), but with no voice coil. This takes the place of the usual 'slug' of air in the bass port for the purposes of cabinet tuning and comprises a mass-loaded piston with an aluminium honeycomb-composite diaphragm suspended in a rubber surround. It is mounted on the rear panel behind the vented amplifier heat sink and extends the low-frequency performance almost as far as that of the HR824. The waveguide-loaded tweeter uses a similar aluminium dome design to the other models.

Although the drivers and waveguide look very stylish, the black ash cabinet is a no-nonsense design made from 5/8-inch MDF with additional internal bracing to increase its rigidity and reduce resonances. The crossover design is also optimised for the D'Appolito driver configuration, and includes time correction and phase alignment. This is an adaptation of a Butterworth-response, 18dB/octave filter with a crossover frequency of 1.8kHz. As with the other models, extensive driver protection guards against excessive signal peaks, overheating, and radio-frequency interference, while independent compressors come into play to prevent the high- or low-frequency amplifiers from being driven into clipping. As expected, the amplifier has a delayed, soft start to prevent thumps, and it also shuts down gracefully. The power switch and its status LED are mounted on the front panel along with a clip warning LED, but the rest of the controls and switches are on the rear panel.

The rear of the cabinet houses the amplifier heat sink and the passive radiator, where the heat sink also doubles as the control and connection panel. Power comes in via an IEC mains lead, and the signal input is on balanced XLR, balanced TRS jack, or phono. Gain controls are fitted for trimming the input levels, and the familiar Acoustic Space switches are provided to optimise the response of the speaker depending on its proximity to walls and other surfaces. These offer three options: the 'A' position's 4dB of shelving cut at 40Hz; the 'B' position's 2dB of shelving cut at 40 Hz; and the flat 'C' position.

Photo: Mark EwingThe reason these filters are necessary is that, when a loudspeaker is mounted away from walls, very low frequencies radiate in all directions, so the available LF energy propagates over a full 360 degrees. This is known as full-space operation. If, however, you were to place the speaker against a solid wall, all the energy radiating to the rear would be reflected back into the room in phase with the forward-radiating sound, resulting in a doubling of the bass energy at the listening position.

To compensate for this, the bass end needs to be dropped by 3dB, but as few home studio walls are completely solid, Mackie have given the switch a 2dB cut in the Half Space position. There's also a -4dB setting (quarter space) for use when the speaker is mounted close to two walls, such as in a corner, though this is not generally recommended, as the bass end can become very uneven.

For systems where it is inconvenient to switch the monitors off at the mains, there's an automatic standby mode, selected from the rear panel, that activates the speakers when the input signal rises above -74dBu (0.155mV). A High Frequency switch provides 2dB of HF cut or lift at 10kHz, both to compensate for the acoustic environment and to suit personal preference, and there's also an in-built, switchable 80Hz high-pass filter (second-order Butterworth) for when you're using the HR626 with Mackie's optional subwoofer. The optional bass roll-off filters of the other two models have been omitted.

The outcome of all this technology is a monitor with a frequency response of 42Hz-20kHz ±1.5dB and a -3dB point at 40Hz. The high end is 3dB down at 22kHz, where the maximum peak SPL (per pair) at one metre is 118dB and the maximum short-term SPL is 109dB.

I've used HR824s in my studio for a long time now and I found the HR626s to have the same family sound. If anything they are slightly crisper in the mid-range because of the smaller bass/mid-range drivers, and in this respect their sound is probably closer to that of the HR624s, but with the bass extension approaching that of the HR824s (which actually go down to 38Hz). When you compare any of the Mackie monitors with really high-end models using soft-dome tweeters, they sound slightly less smooth and a little more 'forward', but in the context of 'real life' monitoring, I find they work extremely well, giving a good account of what's really going on when you're mixing.

The HR626s have a very solid punchy low end which is at the same time well controlled, a clear and detailed mid-range, and plenty of high-end detail without the shrillness some metal-domed tweeters can produce. I'm not usually a fan of metal tweeters, but I think these represent a sensible compromise between neutrality, clarity and the ability to play loud without excessive distortion.

The stereo imaging is fine in either orientation, and because the low-end roll-off is slightly higher than that of the HR824s, they are suitable for use in smaller rooms with less-than-optimal acoustic treatment. In my own studio, which is garage-sized (on account of it having originally been built as a garage!), they delivered plenty of kick, but without provoking the room into misbehaving.

If you like the other monitors in the Mackie HR series, then you should get on well the HR626s. They are in many ways a blend of the attributes of the two previous models, and they deliver more than adequate level for any sane user at nearfield distances (just a couple of decibels less than the HR824s) while also 'telling it like it is'. Good mixes sound great, bad mixes sound awful, which is just as it should be. In all, a very worthwhile addition to an already well-respected range of monitors.

These monitors are sensibly priced in the UK and they do the job. They have clarity, they have adequate bass extension, and they tell you what you need to know about a mix. You can buy more refined-sounding speakers if you are prepared to spend a lot more, but in most project studio situations I don't think the mixes would be any the better for it.