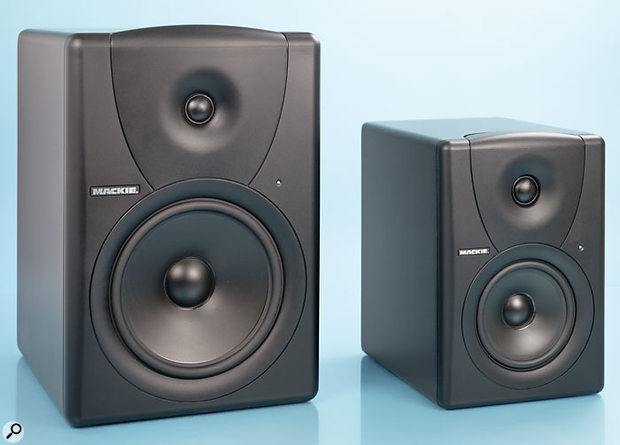 Last year Mackie impressed us with their HR Mk2 series of studio monitors, but they've now introduced new models at roughly half the price. Surely this means there are compromises?

When Mackie's parent company Loud Technologies sold Italian PA manufacturers RCF in 2004, I was a little concerned that Mackie might have lost their main speaker designers. But the HR Mk2 series (reviewed in SOS September 2007) put my mind at ease. If anything, they out-perform the old models, thanks in no small part to the design team of another Loud Technologies division, EAW, a leading high-end live-sound company in the US.

Mackie's new MR5 monitors are less costly counterparts of the HR624 Mk2s, and the larger MR8s are similarly comparable with the HR824 Mk2s. Both MR models are aimed at smaller studio setups, where budgets are tighter yet good monitoring performance is still essential, but the MR5s are intended for use in more 'compact' situations, where the extended low end of the eight-inch MR8s could serve to exaggerate deficiencies in the room acoustics. Both MR models are magnetically shielded, so they can be used close to CRT-type monitors.

As with the MR8s, the two-way, active MR5s have a built-in tweeter waveguide to control dispersion, as well as the usual array of acoustic controls on the rear panel — so you can tailor the response to suit your room and the location of the speakers within it. High-frequency adjustment of +/-2dB is available by means of a slide switch, and the low end can be set to flat, +2dB or +4dB. All the baffle elements surrounding the drivers are smooth, in order to minimise diffraction, and the drivers themselves are powered by Class-A/B MOSFET amplifiers (rather than the more efficient but arguably less smooth-sounding Class-D circuits that are starting to become popular). These amplifiers include active protection circuits and deliver 55W into the woofer and 30W into the tweeter, with more than 50 percent extra power in hand for short peaks. A 24dB-per-octave crossover operates at 4kHz, and an overall frequency response of 60Hz to 20kHz (+/-3dB) is quoted. There's also more than enough level (113dB peak per pair at one metre) for sensible listening in a nearfield environment. 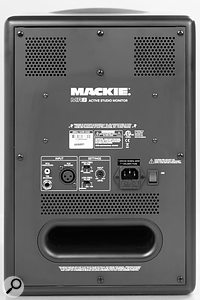 The Mackie MRs are rear-ported monitors and the design helps to keep port noise to a minimum.The steel rear panel offers both balanced and unbalanced inputs and is also home to the rear port, which helps shield the user from any vent noise when a lot of bass energy is being pumped out. Use of an L-shaped port with a slotted mouth that has a slight flare also minimises port noise. Tucking the port around the back at least means the kick drum won't part your hair, although it also means you can't push the monitors right up against a wall. Balanced XLR, TRS and unbalanced RCA inputs are fitted, along with a rotary level control, and mains comes in via an IEC socket, adjacent to which there's a power switch. When the monitors are powered up, an unobtrusive white LED lights on the baffle.

Speaker enclosures are often overlooked in favour of the more glamorous components within, but a rigid box is necessary to keep resonances to a minimum. MDF is used here (because of its dense, uniform structure), with added internal bracing and open-cell foam filling the internal air space to absorb reflections. Each cabinet measures 11.25 x 7.75 x 10.5 inches and weighs 14.3 pounds (6.5kg). All the corners are nicely rounded and the cabinet sides are finished in a black satin paint. The drivers comprise a five-and-a-quarter-inch, steel-frame woofer, teamed with a one-inch, silk-domed tweeter, mounted behind a shallow waveguide. The voicing of the speaker is designed to match that of the MR8 other than in bass extension, which means that it is perfectly feasible to use a pair of MR5s as rear surrounds in a 5.1 system with MR8s at the front.

As expected, the MR8 has a larger cabinet (15.75 x 10.85 x 13.6 inches) with an overall weight of 27.6lbs or 12.5kg — almost twice that of the MR5. The low end is handled by an eight-inch, steel frame driver and the amplifier power is raised to 100W for the woofer and 50W for the tweeter (this time with enough headroom to handle brief peaks of twice that power), but otherwise the construction and feature set is very similar to the MR5. The frequency range extends from 40Hz to 20kHz (+/-3dB) and there's 3dB more level to play with. A slightly different design is used for the tweeter amplifier (based on a DMOS IC), while the low end benefits from a more traditional discrete design that is based around bipolar transistors. An electronic crossover with a 24dB-per-octave slope splits the incoming audio at 3kHz.

The MR speakers certainly look the part but at around half the price of the Mackie monitors we've come to know and love, surely there are some compromises? Actually, there aren't too many. The sound of the little MR5 is punchy, with decent separation between instruments, a smooth mid-range and a non-fatiguing top. However, in my studio (11 x 16 feet), with the speakers a couple of feet from the end wall, the low end seemed just a bit hyped on the flat setting. Moving the tweeter up to its +2dB setting helps redress the balance but my impression is that the low end has been tuned to flatter drums (kicks and toms sound really punchy) and the result is that the balance between bass notes isn't quite as even as it could be. I can't imagine ever wanting to use the +2dB bass setting, let alone the +4dB setting, so having 2dB of switchable bass cut or boost would have been a better option, in my book. Nevertheless, for such a compact and affordable model, I was extremely impressed with the overall sound. These speakers managed to put across the detail in a mix without getting noticeably harsh or gritty at the top end. The stereo imaging is pretty decent (as you'd expect from a physically small speaker), and the phantom central image is reasonably solid too. I tried stuffing a pair of socks into each bass port and actually got what I felt was a much tighter and better controlled low end — although I'd have to experiment a little more to be sure exactly what type of sock is most effective!

You might expect that swapping to the larger MR8s — with their greater bass extension — would be overkill, but that actually turned out not to be the case. They reproduce the deepest notes with no sense of effort, but there's definitely less of a sense of hyping up the 80-90Hz region than with the MR5s. In fact, all sounded well balanced with everything set flat. The overall sense of clarity was improved, with less lower-mid ambiguity, and although half the price of a pair of HR824s, they weren't that far off in terms of performance. The old 824 Mk1s have a bit more air around the top end, a touch more overall clarity and perhaps slightly better stereo imaging, but the overall character is not dissimilar.

Taking into account both price and performance, I can really recommend these speakers for home studio use, though if you find the MR5s a bit too bass heavy, as I did, you may have to visit your sock drawer or make up a couple of foam bungs to tame them. The MR8 is a much more serious prospect if your budget and room size can stand it.

If you're considering buying the Mackie MR-series monitors and would like to audition other models for comparison, you could look to the Alesis Monitor 1A Mk2s, the Fostex PM series, KRK's RP series, the Event TR5 and TR8 and Tannoy's Reveal monitors.

I rather prefer the sound of the larger MR8, with its effortless, well-balanced low end, but both models perform well considering the low price.