There’s no shortage of small USB audio interfaces on the market but, like Focusrite, who already have a strong foothold right across the audio interface range, Mackie are making the most of the reputation of their analogue preamplifiers. After all, if the converters are as good as you can get at a certain price, it is the analogue circuitry that will most strongly differentiate one model from another. In these two Mackie interfaces, the mic amp circuitry follows the design created for their respected Onyx mixers. The two models we’re looking at here, the Artist 1.2 and the Producer 2.2, are both well-suited to the desktop musician who wants to record only one or two tracks at a time. They also offer a practical mobile solution when paired with a laptop.

Built in China to keep them affordable, both models feature stylish, tough metal enclosures housing 24-bit converters that can run at sample rates of up to 192kHz. The shells have a black anodisied finish with the familiar Mackie running man logo on top, and their overall weight is around half a kilogram each. Rubber feet on the bases keep the units from sliding off the desk, and the knobs have a rubbery feel making them easy to grip. These interfaces are USB2 bus-powered, so there are no extra PSUs to worry about, and they offer full compatibility with Apple’s Core Audio and Windows ASIO. A USB cable is included.

Both include zero-latency direct-source monitoring, a large monitor volume knob and a quarter-inch TRS headphone outlet with its own level control.

There are two key differences between the two models: the Artist 1.2 has one dedicated XLR mic input and one switchable line/high-impedance instrument input on a balanced/unbalanced jack, while the Producer 2.2 has two ‘combi’ inputs, either of which can accept mic, line or instrument sources, plus it has twin five-pin DIN sockets for MIDI I/O. The Producer 2.2 also sports a separate Mix control to balance the direct monitoring level with the DAW return. Both have switchable phantom power and rear-panel stereo outputs on balanced quarter-inch jacks that may also be used unbalanced. 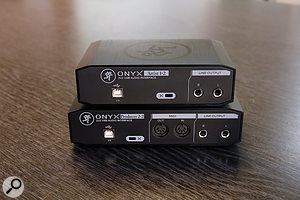 Discrete status LEDs are fitted for all the key functions; a green LED shows when power is being received over USB, and the switches for phantom power and instrument input also light up green when active. A further small LED next to the input gain control lights green when a nominal signal level is being received and turns red when the gain is so high that clipping occurs. This is provided mainly as a quick check that signal is getting into the interface, as any detailed input level metering would normally be done within the host DAW.

The specification sheet quotes a frequency response flat within ±0.5dB and distortion figures that range from 0.001 to 0.005 percent, depending on which input is in use. Healthy noise figures are also quoted being better than -100dB relative to digital full scale for the inputs, -85dBu for the line outs and -75dBu for the headphone output.

These days some manufacturers like to sweeten the deal even further by bundling software with the interface, and in this case you get the Tracktion T7 DAW plus their 16‑plug‑in DAW Essentials Suite that normally sells on its own for $159 and supports all the major Mac OS/Windows plug-in platforms. This looks to be a serious bundle and, as the name implies, the Essentials Suite contains the most essential mixing tools, comprising an eight-band EQ, Compressor, Reverb8, Delay Studio, Stereo Delay, Tape Delay, Crossover, Limiter, Expander/Gate, Ducker, Flanger, Crusher, Chorus, Bus Compressor, Phaser and Auto Filter.

Taking the Artist 1.2 first, everything is straightforward plug-and-play as no special drivers are needed. Once selected as the active interface in my DAW I started to check out its abilities. Unlike the slightly more sophisticated Producer 2.2, the direct input monitoring is always active in the headphone output so you have to use the output level fader in your DAW to balance the direct sound with what’s coming back from the DAW. As always with direct source monitoring, in order to avoid disconcerting slap-back echoes due to DAW latency, DAW monitoring of the input really needs to be turned off. Alternatively you can monitor via the main monitor outputs, which don’t receive the direct signal.

While the spec sheet doesn’t divulge how much gain is available, the good news is that in practice there’s more than enough for any normal application. The slightly less good news is that a large proportion of this gain is accessed by the last few millimetres of gain control travel, making precise settings in situations where you need a lot of gain a bit tricky. For typical vocals, you’ll probably find you have enough gain on hand before you venture into the sensitive upper reaches of the gain control, but it pays to be aware of how the control operates. These interfaces are by no means unique in suffering this problem: it affects a lot of affordable preamps and would require a more costly potentiometer with a custom ‘law’ to get around it.

Switching to channel 2, the signal path is clear and clean with plenty of gain in high-impedance mode to accommodate guitars and basses with passive pickups. Again, a shed-load of gain comes howling in as you approach the full gain position, but for typical instrument DI’ing you’ll probably be working well below this zone. The headphone level is not punishingly high but still enough to go beyond safe continuous monitoring levels so it’s a good plan always to start with it turned down.

Switching to the Producer 2.2 interface, having the ability to balance the direct monitoring level and DAW return using a single control is a step up in convenience, as is the option to use any permutation of input sources via the two ‘combi’ inputs. There’s the same issue with gain bunching at the top of the gain controls, but then you’re unlikely to need to stray into that region unless you’re using a passive ribbon mic. Its MIDI interface is recognised by Apple’s Core MIDI and is available for selection within your DAW. No fuss — in my Logic setup it just worked.

That brings me to the bundled software, which shouldn’t be dismissed as a gimmick. Tracktion’s T7 DAW was originally marketed by Mackie under the Tracktion name before being sold on and then finally picked up by its current team. Over that period it has developed from a simple entry-level DAW to something you can do serious work with, so if you are new to the world of DAWs, I’d suggest giving it a go. As for the plug-in bundle, I have to say that I’m impressed with the quality of these plug-ins, which cover all the essentials plus a few more creative things such as Delay Studio, Crusher (digital distortion) and Auto Filter.

In summary then, these are basic but solidly engineered interfaces capable of working at high sample rates, and the only real criticism relates to the non-linear nature of their gain controls when near the most clockwise ends of their travel. The bundled software is genuinely useful, and bus-powering also makes them practical in mobile applications.

Both these interfaces do exactly as claimed, though the extra features of the Producer 2.2 make it worth the extra outlay.