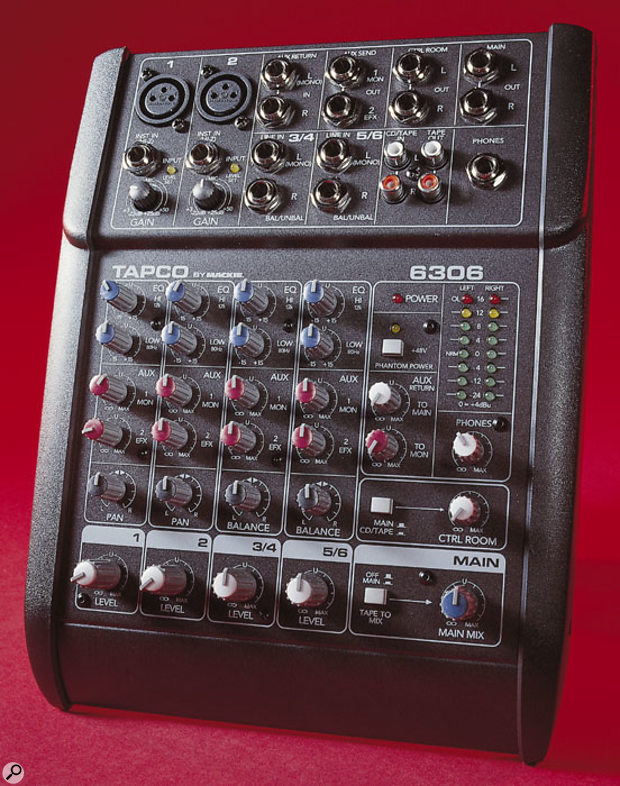 This affordable mini-mixer from Mackie brings their Tapco brand bang up to date.

Tapco was originally a company set up by Greg Mackie at the tail end of the '60s building small, tough, value-for-money mixers. Now Mackie have launched their own Tapco mixer range using updated designs and manufacturing techniques, but retaining the same ideals. The Tapco 6306 is a simple analogue mixer based on familiar Mackie styling. Steel panels are complemented by moulded plastic end cheeks and all the connectors and controls, other than the power switch and PSU socket (the mixer is powered from an external power supply) are on the top panel for easy access.

The design offers two mono mic/line/instrument channels plus two further stereo line-only channels, the latter accommodating balanced or unbalanced inputs on TRS jacks. The first two channels have Gain controls and clip LEDs, while all channels have two-band EQ, one pre-fade and one post-fade aux send, plus a pan/balance control. Both EQ controls have a range of ±15dB and the EQ circuit comprises a high shelving 12kHz filter and a low shelving 80Hz filter. Channel level is adjusted by knobs rather than faders and a further two aux input jacks allow external effects to be brought into the mix. Aux sends are on quarter-inch jacks, and two-track feeds and inputs are on phonos.

The mixer has separate main, monitor and phones outputs, with rotary controls for the main mix level and the monitor level. A separate control is available for the headphone level and two routing buttons make it possible to route the two-track inputs to either the monitor mix, the main mix, or both. Phantom power can be switched onto the mic input XLRs, while two further rotary controls allow the stereo aux return input to be independently mixed into the main mix and the monitor mix. Status LEDs show when the power or phantom power are on, and a pair of eight-LED meters monitor the stereo output. 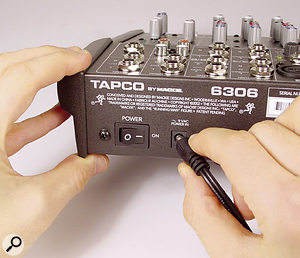 Power to the 6306 is provided via an external power adaptor, unlike on Mackie's other compact mixers.Photo: Mike CameronSimple though this mixer is, it is well-specified, with quiet mic preamps (-128dB EIN), adequately low distortion (less than 0.025 percent) and an extended frequency response flat within a decibel from 20Hz to 20kHz, and only 3dB down at 10Hz to 80kHz. The maximum rated output level is +18dBu with the main, aux and control room outputs operating at a nominal +4dBu.

A small mixer of this type is ideal for anyone using a soundcard, because, by selecting the two-track returns as the control room monitor source and then connecting the soundcard outs to the two-track phono inputs, you can use the master section of the mixer to control the monitor level and to provide a headphone feed while overdubbing. At the same time, the two mic inputs and the stereo line inputs are available to be mixed and recorded to your soundcard via the main stereo output. The separate To Mon mix control for the effects return means that, if you have a reverb unit connected, you can send reverb to the monitor or headphone mix without having to record it, so the apparently simple routing of this little mixer is in fact very flexible.

For mixing, the two-track input can be disengaged from the monitor mix and instead routed to the main mix buss, where it can be combined with up to six live inputs from hardware synths or other sources fed in via the mixer channels. Effects can be added using the aux sends and an external effects box. If you don't need effects, you can use the aux inputs to connect another stereo line source. Live, this mixer is ideal for running a mic or two plus a couple of synths or a laptop computer, while the two-track input makes it easy to add a backing track or interlude music. Live effects such as reverb can be handled by the aux sends and returns, as can a simple foldback mix, though the use of an external PSU means you have to be careful to set up in such a way that this won't get disconnected during your gig.

Subjectively, the Tapco 6306's performance is comparable to a pre-VLZ Pro Mackie mixer, which is to say clean and clear, but without being esoteric. Such a mixer has many uses, from providing a couple of spare mic preamps to forming the control centre of the computer studio. It's also a neat little mixer for live use, where a limited number of sources need to be mixed. The bottom line is that, by moving their manufacturing offshore and launching the Tapco range, Mackie are aiming to deliver Mackie quality, but at a UK price that competes favourably with the Chinese-built equipment already flooding the market from other manufacturers. Other than the external PSU, the Tapco 6306 seems like another thoroughbred Mackie.

While ostensibly part of a new budget range, the Tapco 6306 seems essentially to be a regular Mackie mixer, but with an external PSU.