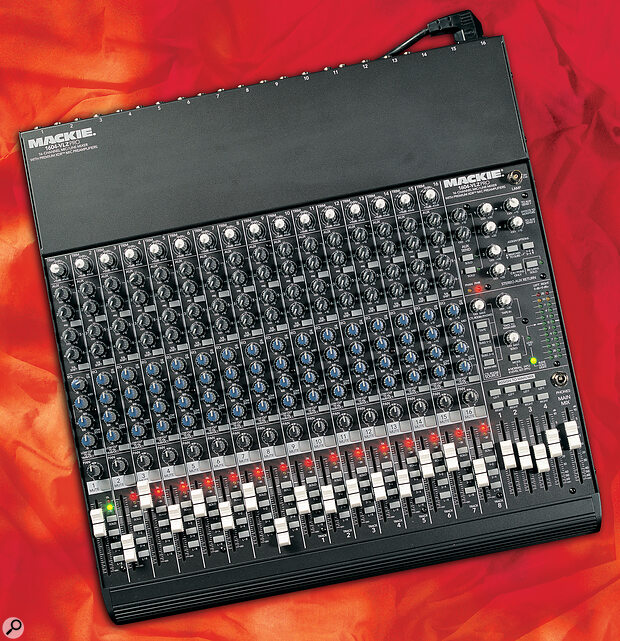 The updated compact mixers in Mackie's VLZ range may look the same as ever on the outside — but inside lurk new, high‑grade microphone preamps. Hugh Robjohns tries out the new design.

Mackie's popular 1604 model defined a new standard in compact mixers when it was launched in 1991 (see Sound On Sound review Dec '91), offering a unique combination of operational versatility with high sound quality and construction values. Given an extended lease of life, via enhanced facilities and a cosmetic makeover, in its subsequent 'VLZ' incarnation, both the 1604 VLZ and its companion models in the range now find themselves the recipients of a further revision in the form of Mackie's latest 'XDR' "premium studio‑grade" mic amp.

It is the sound quality of this most crucial element of any console that really determines the sonic standard which can be achieved and, with the new 'XDR' design, even the smallest Mackie mixers now offer a performance which is comparable to, and maybe even better than, most high‑end £100,000+ studio consoles. A very sobering thought for the industry big boys! XDR stands for 'Extended Dynamic Range' — something the new design has in abundance — but the update is about rather more than just greater headroom. 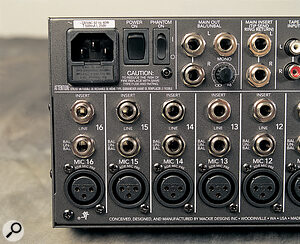 As the owner of four expensive, but wonderful, channels of GML mic preamplification, I openly support the view that, when used in the appropriate circumstances, high‑end mic amps are worth their relatively high price. This concept is probably not too surprising, and I would guess that most people reading this will already subscribe to the idea that the better (and inherently more costly) the microphone, the more accurate it is likely to be. However, the subtle nuances and intricate detail captured by the best microphones in the world are all too easily lost during passage through the rather average microphone preamplifiers found in a typical home recording desk.

Mackie are claiming that "no other company in the world has spent the sheer number of research hours and $250,000 in R&D costs on a single mic preamp design"! Their new XDR design has apparently been two years in the making, and was driven by Greg Mackie's wish to bestow his mixers with preamps capable of matching or exceeding the performance of any esoteric outboard unit.

The main design goals for the new preamp were that it should be able to protect itself from destructive external forces, not be prone to Radio‑Frequency Interference (RFI), and that its performance should not vary with different mic‑cable impedance loads. Above all, it had to be accurate, sound good, and have very low noise and wide bandwidth at any gain level. Basic though these goals may appear to be, it is surprising how few commercial designs actually stand up to careful scrutiny in any of these respects. For instance, many mic preamps suffer long‑term degradation from 'hot‑plugging' mics when phantom is turned on. The voltage spikes caused during hot‑plugging lead to a gradual breakdown of the input devices, with increasing noise and eventual total failure! I have personally experienced at least two professional studio multitrack desks which have fallen prey to this phenomenon.

It has been well known for many years that, to convey the most detailed and accurate sound, a preamp needs a very wide bandwidth. Unfortunately this approach can also make the design prone to picking up external RF interference — radio transmissions from broadcasters, mobile phones, and so forth. Mackie have addressed this issue with good solid engineering practice — bifilar‑wound DC pulse transformers that reject RFI but don't attenuate the sound at 20kHz and above. They have also used matched precision components in the most critical areas of the XDR mic preamplifier, and employ a direct‑coupled circuit topology with instrumentation‑style balanced differential architecture and linear constant current biasing. Nothing revolutionary, but well engineered and carefully designed using surface‑mount devices and automated assembly to keep the costs as low as possible.

The inherent capacitance (and inductance) of microphone cables can have a very dramatic effect on the performance of a microphone preamplifier, particularly with very long cable runs, such as in a stage multicore, for example. A microphone's frequency and transient response is strongly affected by the load it has to drive — the combination of the mic amp input and cable. The Mackie XDR design incorporates a 'Controlled Interface Input Impedance system' which works to maintain a flat frequency response within about 0.1dB, irrespective of how long the mic cable is, or what source impedance the microphone has.

I auditioned the XDR mic preamp in two different Mackie models, the 1604 VLZpro and the 1402 VLZpro. Both performed identically, and easily passed every real‑world test I could come up with. I was also ablto compare the performance of both of these 'budget' desks with my own GML 8304 'esoteric' mic pre.

The most obvious thing about the new design is its astounding noise and distortion — or rather the complete lack of either. This really is a very, very quiet mic pre, which passes the signal from the microphone with the absolute minimum of degradation, even with high‑level and complex sources. The top end is sparkling and detailed, but without any unnecessary emphasis, the mid‑range is neutral and accurate, and the bass is tight and clean, although possibly tending slightly towards the lean side for my tastes.

The investment Mackie have made in developing the XDR mic pre benefits the end user at all levels. After all, the smallest model in the updated range, the 1202 VLZpro mixer, costs only around £300, yet boasts highly competent mic stages which certainly compare favourably with anything provided in consoles costing 10, 100, or even 1000 times as much! In a straight comparison with the GML, everyone who I bullied into listening confirmed that the noise and distortion subjectively sounded the same, and no one could favour one over the other on these grounds alone.

The mid and treble bands were equally similar, but identifiable differences could be found at the bottom end. Although both mic amps measured virtually identically in terms of their frequency response, the GML sounded somehow warmer, and the bass better integrated with the mid and high frequency regions. Instruments and voices had a greater solidity and a totally natural, three‑dimensional image to them through the GML, which the Mackie suggested but could not quite deliver. However, I should point out that it took a considerable amount of listening and experimentation before we were happy that these differences were real and repeatable — it really was that close.

Without directly comparing the Mackie XDR to any other mic pre, anyone would have to judge it to be a very fine‑sounding input stage. Put it up against a Focusrite or GML, however, and you will still be very impressed. The differences are extremely small — certainly far smaller than I expected — and whilst the 'esoteric designs' might just retain a sonic edge, the enormous price differential should be enough to keep a smile on the face of the Mackie owner!

The 1604 VLZpro offers 16 mic/line inputs, each with a TRS‑jack insert point, feeding four group busses or the main stereo buss. Three‑band EQ with a swept mid section, and six aux busses, fed from four pots (each channel can be switched to access either busses 3 and 4 or 5 and 6) complete a remarkably comprehensive line‑up of facilities for a mixer of such compact dimensions. The all‑metal chassis and positive feel of all the controls helps to inspire confidence in the build quality, and the 1604 retains its unique ability to have its chassis reconfigured to allow the connector panel to face whichever direction best suits the application. For a more complete overview of the general mixer features see Sound On Sound review in July '96; for its smaller relatives, the 1202 VLZ and 1402 VLZ, see February and June of that year respectively.

The most obvious aspect of the new preamp (well, it is in the title after all!) is its massive 130dB of total dynamic range — well up to the challenge presented by 20‑ and 24‑bit digital recording systems. The XDR provides a gain swing between 0 and +60dB, with a maximum input level of +22dBu. Furthermore, the Equivalent Input Noise is not only close to the theoretical minimum at full gain (‑129.5dBu with 150Ω source), but retains an impressive performance even at modest gain settings in the +20 to 30dB range. Its other technical specifications make impressive reading too, with 0.0007 percent Total Harmonic Distortion, and near 'DC‑to‑Light' bandwidth which is only 3dB down at 3Hz and Radio 4 long wave! Its design topology also helps to provide extremely low intermodulation distortion when operating at high levels — the figure of 0.0008 percent is quoted for 35dB gain.

The sonic quality of these mic preamps really does rival that of expensive esoteric designs, and further enhances the capabilities of these highly versatile compact mixers.