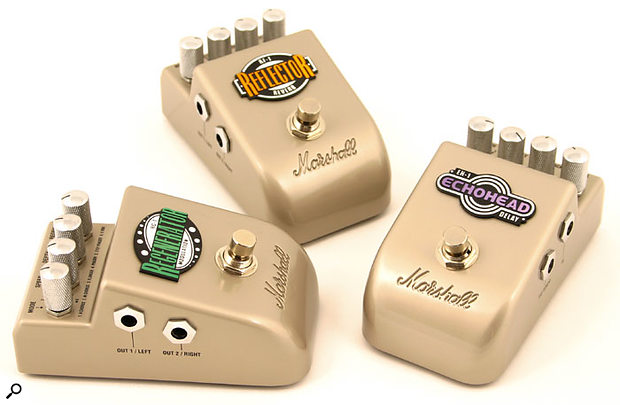 Marshall have added a new range of digital guitar pedals to their portfolio, but rather than stick with the usual 'one trick per pedal' format, they've come up with three pedals, each of which features six different effect modes, selectable via a rotary switch. They've also given the pedals two outputs — one is fed from a true mechanical bypass and the other allows the decay of delay-based effects to trail off naturally when the effect is switched off. When both jacks are used together, you lose this latter feature but gain the advantage of stereo output. Each pedal also has an extra input jack, accepting either an expression pedal or a footswitch.

The pedals have solid cast-metal casings and can be powered from a 9V battery or an optional power adaptor. The battery compartment is underneath, secured by a large-headed screw that can be unfastened with a small coin. A non-slip rubber base keeps the pedals stable on the floor and the controls are set back out of the way of careless feet.

First up, the Regenerator pedal (£60) offers a choice of Vintage Chorus, Multi Chorus (based on Marshall's own Supervibe pedal), Vintage Flanger, Phaser, Step Phaser and Vintage Vibe modes. Besides the rotary mode switch, two further knobs control rate and depth. The final knob — labelled 'Regen' — feeds some of the output back into the input.

I found the Vintage Chorus mode a little less fluid than, say, the Boss CE-2, but it worked well enough. Multi Chorus produced a richer sound that I generally preferred. Flanger produced a very traditional flanging sound, but without a control to adjust the nominal delay time, it isn't quite as flexible as some units. Nevertheless, it's a very musical and useful sound. The standard Phaser setting sounded right to my ears — warm and smooth — while the Step Phaser creates a jumpy, synth filter-type effect. Finally, the Vintage Vibe recreates the classic Univibe-style sound that is half way between chorus and phasing, used extensively by Jimi Hendrix. I thought this sounded pretty authentic. An expression pedal may be plugged in to control the modulation rate of any of the effects.

The Echohead (£65) has a similar layout, with the knobs adjusting Mode, Delay Time, Feedback and Level. The dry level of the guitar always remains constant so you never end up with an echo-only output. The mode settings are Hi-fi, Analogue, Tape Echo, Multitap, which produces a more dense cluster of echoes, and Reverse, which delays and reverses the effected part of the sound and adds it to the normal dry sound. Finally, there's Mod Filter, which adds a filter sweep to the delayed sounds. An optional footswitch can be used to tap in the delay time.

I rather liked this pedal, particularly the Tape Echo and Analogue settings, which nailed the tonal character of the real thing pretty well. Tape Echo even introduced some gentle pitch variations to give the effect of worn transport components. Mod Filter was more subtle and musical than I'd expected and the Reverse setting provides a nice variation on normal delay, though you can't dial in 100 percent wet and play backwards solos as you can with some units. In stereo mode, the Multitap delay ping-pongs from side to side to add movement and interest to the sound.

Reflector (£60) is dedicated to reverb effects, with Hall, Plate, Room, Spring 1, Spring 2 and Reverse modes. The middle two knobs control decay time and high-frequency damping while the fourth controls the mix of reverb and dry signal. Most of the modes are self-explanatory, though Spring 2 is a blend of spring and electronic reverb while Reverse puts a reverse envelope on the reverb decay making it appear to build up rather than decay. The reverb may not be quite studio grade but it is still pretty good and certainly more than adequate for live performance. I liked the character of the Plate setting but also found the Room setting to be useful for adding space to a sound at short decay times. An expression pedal can be used to adjust the decay time and there's a nice stereo spread to the sound if you use stereo outputs to feed two amplifiers.

These pedals are tough, practical and sound very good without actually breaking any new ground. That's not such a bad thing, as most of their algorithms are designed to recreate vintage effects! Given that they cost around the same price as a decent single-function pedal, this range combines flexibility with value, and the build quality should ensure they stand up to life on the road.

The new Washburn X50 Pro FE is the latest addition to the manufacturer's rock-oriented X Series range of solid-body electric guitars. It's based on the X50 Pro, but has a flamed-maple carved top (as opposed to quilted maple) and active EMG humbucking pickups — an EMG 81 at the neck and an EMG 85 at the bridge. The X50 Pro FE also features a plain rosewood fingerboard and Grover 18:1-ratio tuners, and it uses the patented Buzz Feiten tempered tuning system, designed to give better intonation. It's available now in transparent black or transparent red gloss finishes, priced £599.

T-Rex Engineering have produced a pair of new pedals. The Room Mate is a valve-equipped reverb pedal offering four types of effect — Classic Plate, Warm Hall, Bright Hall and Chorus with Warm Reverb. It has a mono input and stereo out and has Mode, Mix, Level and High Cut controls. The Bloody Mary (pictured near right), on the other hand, is an all-out distortion pedal with Gain and Level controls and High, Mid and Low EQ knobs. A Body switch boosts the bass and low mid-frequencies. 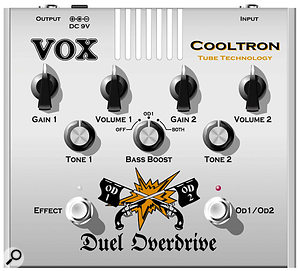 Vox have added two new tube-driven pedals to their Cooltron range. The Duel Overdrive pedal (pictured far right) is based on Vox's Big Ben overdrive and provides two separate drive effects with independent Gain, Volume and Tone controls. A bass boost can be added to one or both overdrives. The Vibravox combines tremolo and vibrato effects. In addition to Depth, Ratio, Skew and Volume knobs, there are two Speed controls that govern both effects. The Vibravox can be set to switch between two speeds of tremolo, two speeds of vibrato or between a tremolo effect controlled by the first Speed control and a vibrato effect set by the second. Both pedals run off four AA batteries or a 9V mains adaptor (not included). The new Cooltron effects will be out in June, with pricing to be confirmed.

Guitars can suffer from tuning stability problems for a number of reasons. Most stability problems can be traced back to what might be called the friction points — the bridge and the nut — but strings can also bind on string trees (where fitted) and slippage around the tuning machines can also be significant, especially if you don't fit the strings correctly.

Everyone has their own way of fitting strings, but I tend to pass the string through the hole in the tuning machine post, and then put a right-angle bend in it to prevent it slipping back through. As I tighten the machine, I'll take one turn around the post above the string hole before guiding the string below the hole and then winding two more turns around the post. On tuner posts that taper inwards towards the centre, this helps grip the protruding string end between the upper turn and the lower ones. By limiting the number of turns to around three in total, and by winding the string neatly rather than having turns crossing each other, there's less risk of the string slipping. After fitting new strings I'll give them a good hard pull to stretch them out, then check the tuning with an electronic tuner, and keep repeating the process until the tuning remains stable. By doing this you can usually play a gig ten minutes after fitting new strings with very little in the way of tuning problems.

Having said all that, I prefer to fit locking machine heads to any of my guitars that have tremolos as they really do eliminate string slippage at the tuning end of the string. Some manufacturers, such US company Sperzel, produce sets where post heights get progressively lower the further you go from the nut, so on many Strats and similar instruments, you can remove the string tree (or pass the string above it) without risk of the strings popping out of their slots or losing tone through insufficient break angle over the nut.

Players who haven't used locking tuning machines before sometimes make the mistake of thinking that it is the rotation of the string peg that is locked, but this isn't the case. The way the Sperzel tuner works is that there's a hole down the centre of the shaft that intersects with the string fixing hole, and inside this centre hole is a metal pin that can be driven towards the string hole by means of a knurled knob on the rear of the machine (pictured right). Once you've passed the string through the hole in the peg, you simply tighten the knurled knob to clamp the end of the string in place. Not only does this prevent slippage but it also enables you to take only half to three-quarters of a turn around the peg, which means there's less chance of the string windings sliding around on the peg and affecting the tuning.

When fitting new strings, I pull the string through the hole just far enough to take up the slack, and then clamp it before tuning normally. This seems to leave the right amount of string around the post once the string is up to pitch and also leaves enough tuning range for those players who like to re-tune to a drop-D or other alternate tuning. One tip when fitting strings to Sperzel locking tuners is that if the string doesn't seem to want to poke through the hole in the post, and you've checked that the knurled knob is loose, just give the tuning shaft a gentle tap on the top as the pin sometimes sticks. Paul White